A Series of Endings: Clean Room, Unfollow, Nailbiter & The Fuse 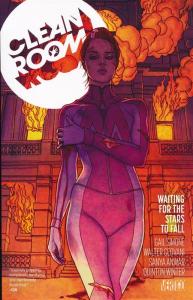 The big conclusion to what Gail Simone calls Season One of the series. Astrid Mueller has spent her life preparing to defend reality from the alien incursion she saw through as a child, and now the end has come. She finds the Clean Room’s alien technology used against her and her lieutenant Chloe. There are two extremely creepy villains in this arc: a redneck psychopath, and an alien baby who is spearheading the invasion. The invasion is thwarted–courtesy of two unlikely allies–and Astrid deliberately tears down the cult she had built, now that it has performed its true function. A very satisfying conclusion, one which would certainly work as a series conclusion. But in January 2017 Simone tweeted that she was already working on Season Two (although I have not seen any publication announcements). It will be interesting to see where it goes, since most of the dangling plot threads were resolved in this collection. Jon Davis-Hunt (who illustrated the first two volumes, although not listed as co-creator) was absent from the artist credits here. Anwar’s issue looks deliberately contrasting, but when Geovani takes over the main story there is no visual shock; the look is visually compatible, if not directly modeled on Davis-Hunt’s style (of course he had to follow the established visual models of all of the main characters). 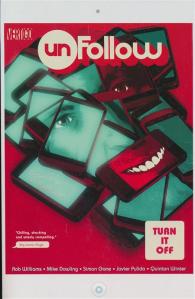 Williams and Dowling’s social network thriller concludes in this volume. The first issue tells Akira’s “origin story’–how he began the journey to the cult leader he eventually became. The second shows how billionaire Larry Ferrell (creator of the social network Headspace that is the driver of this whole story) lost his faith in humanity. And then we are back in the present, with 40 of the original 140 left alive. Rubinstein (the guy wearing the mask) is actively hunting them, but they are onto him as well. An AI of Akira (recently deceased) appears to his followers claiming to speak from the afterlife. And Ferrell–who is miraculously alive after all–decides he wants to keep his money, and calls the survivors to the Venezuelan jungle for an ambush. Violence and craziness ensues: among other things, it is established definitively that the mask speaks by itself (there was always some question about the mental state of the wearer before). There is a grand climax, followed by an epilogue that leaves only two of the 140 alive. One is headed off the grid, so there is hope. A strong conclusion to the series. The first two issues (the flashbacks) feel like a lull in the action, but the final four are relentless. 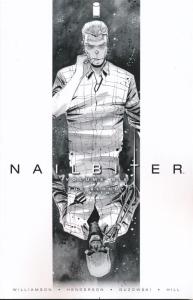 The saga of the Buckaroo Butchers comes to an end. The final collection answers all of the lingering questions, many of which had been hinted at for some time. There is a reason why the town has produced so many serial killers, and it is tied in to the mysterious network of underground tunnels. The identity of the mysterious Master is revealed. And the story finds a plausible way to reunite all of the major characters: FBI agents Nicholas Finch and Abigail Barker; Sheriff Sharon Crane and her daughter Alice; and of course Edward Charles Warren, the titular Nailbiter, as well as the most recent Buckaroo Butcher. After a literally explosive climax (the whole town is destroyed in a series of underground explosions), there are a few pages of epilogue showing how the remaining characters have gotten on with their lives. All but one, and his reappearance gives the final scenes a classic horror movie jump scare. Well done. 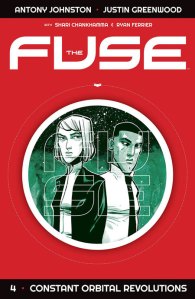 The conclusion to the series begins with what looks like a real ending: a retirement party for Klem, the crusty Russian OG who went from being an engineer to a homicide detective (actually sergeant, and don’t you forget it). In typical Fuse fashion the drunken party adjourns to a game field that should be closed for the day–and finds a corpse floating in the zero-G field. When investigation reveals him as an FLF terrorist, a whole chain of revelations ensues, including some that lead back to Klem’s partner Ralph Dietrich (aka “Marlene”). There is a potential threat to Klem’s son, the Deputy Mayor–as well as an apparent connection to the FLF plot–so everything has a possible personal connection. In the end the plot is foiled, and Ralph’s sister cannot be redeemed. Klem decides to stay on the force rather than retire. So the big mysteries are resolved, and the partners remain in place for a possible sequel.