At the outset, this is a story about a group of talking stray dogs. They are Disney-cute, completely devoted to their master, and doing their best to greet the new dog (Sophie) and make her comfortable. But there’s a private room where they are not allowed, and none of them remember much about how they got there. The master brings the new dog a scarf which reminds her about everything: he killed her master and brought her to his house.

At first, the other dogs do not believe her. But one of the experienced ones accompanies her into the private room, where they see strange, unexpected things (mainly women’s clothing).  Gradually some of the other dogs start remembering things–all of them point towards the master as a serial killer. In the end, all of the dogs unite to oppose their master, which appears hopeless, until a K-9 police dog leads the authorities to the graves hidden under the porch.

So it is a tale that is both cute and horrifying by turns. There is an obvious parallel with Evan Dorkin and Jill Thompson’s Beasts of Burden. But that series also includes cats, as well as a supernatural element (in the form of the Wise Dogs, a group of elders). 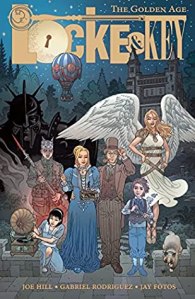 The stories in this collection were developed over the course of a decade: the oldest story was written and drawn in 2011, while the most recent issue was published in late 2021. But they have one thing in common. Set in the early twentieth century, they are all prequels to the main series, which was set more or less in the modern day. In his introduction Hill says that one can read these stories without any experience with the main series. Perhaps the Sandman crossover will draw in some new readers.

“Open The Moon” is a single-issue story that demonstrates the use of the Moon Key, which opens the door to an afterlife inside the moon. It figures into the Sandman crossover, so it was also reprinted in the #0 prequel issue of the Hell & Gone miniseries. “…In Pale Battalions Go…” was originally published as a three-issue miniseries. It tells the story of young John Locke’s determination to use the keys to aid the Allies in World War I. Things go well at first, but a desperate escape brings a German patrol back to the Keyhouse with him. It ends in tragedy, leaving John in Hell.

This sets up the Sandman crossover Locke & Key/Sandman: Hell & Gone, which I have already discussed as part of the Sandman Universe (click on the above link to read it). It still amazes me that Neil Gaiman signed off on it so easily, but it was a great miniseries which caps off this collection beautifully.

The story opens with Catalina (Cata) and her friend Xisco as schoolchildren. Ten years later, the pair are romantically involved, but it’s complicated: Xisco has a couple of other female friends, and Cata is sure that he plans to leave her. Karmen enters, looking like a cute young woman in a skeleton costume. Except maybe it’s not a costume, as she seems to have supernatural powers. She catches Cata in the act of committing suicide by slashing her wrists. Cata is naked, but Karmen assures her that no one will be able to see her, and they leave the apartment to go outside. Before long Cata has figured out how to fly, so we get some beautiful panoramic scenes–like a superhero comic, but naked.

They discuss Cata’s life, and how her next incarnation might go. So it’s apparently Karmen as in karma; she’s really not the “angel” some of the publisher’s blurbs describe her as. When Cata meets a man recently deceased, he loans her his jacket, so the self-conscious nakedness comes to an end. Karmen reports back to her base, and is scolded for taking too much initiative when doing her job. Cata accidentally discovers that Xisco was trying to figure out how to declare his love for her. It turns out that Karmen’s interventions have actually returned souls to their bodies to live a new, better life, based on what they learned about themselves in their time with her after their deaths.

Cata’s life is restored, but at the expense of her memory of her after-death events. Yet memories seem to poke through: she remembers someone named Karmen, and the location of the engagement ring lost by the man who loaned her his jacket. With that, she is able to let go of the dim recollections and go on with her new life with Xisco. The collection concludes with several pages of striking process art (including sketches and location photos) and a cover gallery (including covers by Milo Manara and David Mack). This is a remarkable story, with March’s charming art equal parts metaphysics and human emotion.