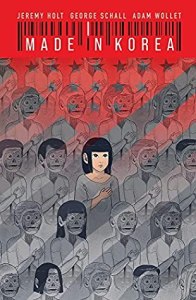 A Korean engineer makes a breakthrough Artificial Intelligence discovery, but realizing that he did it on company equipment he quickly moves to keep it for himself. It needs a real-world test, so he installs it in a nine-year-old female android named Jesse and arranges for an American adoption on the sly. Jesse begins to adapt to her circumstances, and everything indicates that she is thriving, exceeding all expectations of her programming. So, her inventor decides to take her back into his care, which winds up being complicated. Jesse wants to make friends, and becomes involved with a pair of guys planning a mass school shooting. This is a plot development that is dramatically effective, but cuts short a more normal personality development. Watching Jesse adapt to high school would have been a very different story, but evidently Holt felt it needed a crisis. In the aftermath Jesse goes on the run in the company of her inventor, and finally transfers her consciousness into another android–an adult male, who her adoptive parents freely accept. There had been an implication that the inventor was gay, but that is the only preparation for the final plot twist. In the end this is an AI story that takes unexpected turns into sexual identity issues. Schall’s art is up to all of the challenges of the plot, simple but effective.

Bionic opens with a moody, wordless sequence of a bleak futuristic robotics plant. Then it shifts to a scene of geeky teenager Victor getting ready for his first day of the new year at high school. Despite being an outsider, bullied by the BMOCs, he develops a crush on his beautiful classmate Patricia. All the makings of a standard young adult coming of age story, but things immediately take a strange turn when Patricia offers him a bionically enhanced cat for adoption (she can’t tell him where it came from). After being hit by a car Patricia returns to school with similar bionic adaptations, replacing her left arm, leg and part of her face and head. Her father runs the Venn Industries robotics factory, and in addition to having to learn how to operate her new body, she blames him for turning her into a living science experiment. Her behavior becomes increasingly erratic, but Victor continues to support her–leading right up to a life-altering conclusion. 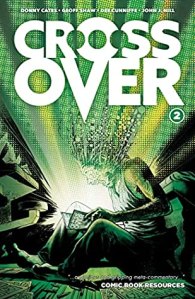 The melding of the real world with the world of comic books continues in this second collection (this time the subtitle is a reference to David Hajdu’s history of the great comic-book scare of the 1950s). The story begins to ramp up the meta aspects immediately, as writer/artist Chip Zdarsky is on the run from the mysterious comic book writer killer. He finds an unexpected ally in the fictional version of himself, only to lose him. He asks the comics characters Christian Walker and Deena Pilgrim from Brian Michael Bendis and Michael Avon Oeming’s creator-owned Powers series for help (they will be new continuing characters throughout this arc). The hits keep coming: dead writers include Scott Snyder (killed by a Batarang) and Robert Kirkman (killed by one of his creations, the surprise mystery killer). Bendis and Oeming show up in the Powers interrogation room, and Cates himself falls in the end. All of these creators were good sports, appearing as themselves and allowing all sorts of jokes about their works. But I found Cates’ self-conscious ramblings tiresome. In the end he has the blinding revelation that comics need artists to come to life, so if the characters want the crossover to end they will have to kill series artist Geoff Shaw. I see another arc coming with comics artists on the run, but I don’t expect to be there for it.