It’s been hard being a Hellboy fan for the last few years. Mike Mignola killed him and sent him to hell–and then took forever to finish the story. This conclusion to the Hellboy in Hell story took from 2014 to 2016 for five monthly issues. Fans should perhaps be grateful that it didn’t run for another five, which Mignola says was his original plan in his Afterword. Despite the compression, the story manages to tie up some loose threads. Hellboy battles the Vampire of Prague for a second time, defends himself against a charge of murdering his family (by his sister, but the Furies are also involved), causes the destruction of Pandemonium (the center of hell), and gets to see the new World Tree he helped create. The conclusion is gentle and elegiac: according to Mignola “this is always how it was going to end.” Of course as he points out, if a character has died and keeps walking around, it’s hard to call anything an end. 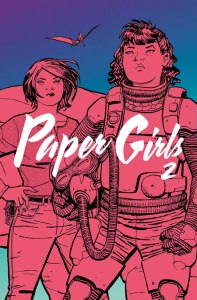 At the end of the first collection it appeared that three of the paper girls had time traveled. The story picks up there, as one of the girls meets her future self (the proof is that they both have the same bullet wound scar on their stomachs). The action mostly revolves around the girls attempting to reunite with their friend: they were separated during the chaos at the end of the previous volume. There’s some fun with the 1988 girls confronting the strange future world of 2016. And the anomalies keep happening: the sudden appearance of dinosaurs and other strange creatures. Plus the two conflicting groups from the future which were seen before. It’s still not clear who are “good guys” and who are “bad guys,” and the story leaves that mostly unresolved, but we learn that the space/time rifts are called “foldings.”  In the end the paper girls are reunited, in yet another strange place. There’s not a lot resolved here, but it remains intriguing. I did notice that the series is a fast read. I can only imagine what it would be like to read it monthly. Viewed as individual issues, I don’t think enough happens in each one.

The first Pretty Deadly collection was a dizzying succession of surreal images and supernatural world building, often difficult to follow. This arc is much more focused. The framing story is again told by a skeleton bunny to a butterfly–this is where the title bear comes in, a parable about the roles of small things (bees) and large (the bear). Sarah Fields is dying. When one of the Reapers comes for her, her children strike a bargain to give them a month until the next full moon to find her son. Cyrus is fighting with the French in trench warfare in World War One. Reapers are sent to find him, and one of them confronts the Reaper of War in an attempt to end the war. Given the battleground setting of much of the story, the art is often bleak. Ríos finds some beauty in the carnage: the Reapers have a certain grace, and a gas attack even provides opportunity for color and texture contrast. This collection includes a good bit of back matter: three “Dead To Rights” columns from the monthlies, “A selection of sketches, pin-ups & prose.” The first one talks about the genesis of the series, and the later include process discussions between DeConnick and Ríos. There’s also a guest illustrated prose piece by Chad Collier and several guest pin-ups.

Hearing the Bernie Wrightson tribute panel at HeroesCon reminded me that I had individual ecomic issues of Frankenstein: Alive, Alive! [IDW Publishing, 2012 – 15] (one of many collaborations with Steve Niles). I remember trade waiting it at the time…but there were only three issues over almost two years. It’s never been collected, and has all the hallmarks of an aborted project. There’s a conversation between Wrightson and Niles in the first issue, about their early exposure to the Frankenstein character. It’s labeled Part One and says “To be continued…” at the end, but never was. Unfortunately the story itself is the same. Despite the long gap between issues 2 and 3, apparently they did intend to continue, because there was no attempt at a wrap-up, just “To be continued…” at the end. I suspect Wrightson’s failing health was the cause. It’s a shame, because they were creating a classic sequel to the original Frankenstein tale–the Monster’s life after escaping the villagers at the end of the book. Wrightson’s art is splendid, and apparently was scanned in color from the original inks. So although it’s basically black and white, you can see more detail, close to looking at the original pages.