Nathan Cole begins this second chapter on trial, explaining how the original experiment had gone horribly wrong, and why he was so personally driven to try to correct it. Director Ward (the general who is holding Cole) announces his intention to use the dimensional shifter as a weapon, which is enough to motivate Cole’s girlfriend Heather (who works for Ward) to release him. Meanwhile Nathan’s brother Ed (who he brought back from Oblivion in the first arc) is struggling to fit in back on the home world. Ed has decided he wants to stay in Oblivion–and when Nathan argues with him he triggers the device, causing another chunk of Philadelphia to switch places with the Oblivion dimension. Lots of big monster fight scenes later, Ed is back in Oblivion, joined by his friend Lucy. The collection ends with a strange scene of a human prisoner and an alien creature who appears to be trying to imitate him…a new twist for the next installment. 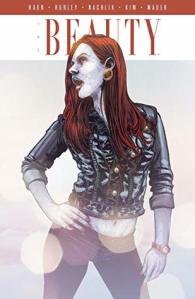 This collection brings together two story lines from earlier volumes. Gang-banger Timo and transgender assassin Ezerae (from Vol. 2) have continued to take vengeance on the mob that killed their mentor. They are relentless and almost preternaturally skilled (of course having strength and rapid healing from The Beauty helps with this). Detectives Foster and Vaughn from The Beauty Task Force finally cross paths with them, and they recognize their M.O. But before they can even think about arresting them they must fight together against the assassin’s latest target and the army of henchmen that arrive to defend him. The assassins get away, so there is one final surprise. An exciting installment, although it is hard to see how all of the series narrative threads can be wrapped up in the final volume. Things will have to move fast!

The stories in this volume go deeply into the relationship between the Ice Cream Man and his nemesis, the cowboy Caleb. The first story is a Western that takes place in a dying world, “longer ago than there are numbers to express.” It is surreal, but establishes that the pair have a relationship that is apparently ancient. So Caleb’s initial appearance earlier in the series was certainly no surprise to the title character. The only question would have been what took him so long! The second story takes place in Mexico, and is almost entirely in Spanish (with translations in the back): the time has jumped forward to 1919. The third installment is a bizarre tale (which looks contemporary). It follows a writer named Will Parson as he jumps from one reality TV show to another. They are a bizarre assortment, which could not possibly be real. But back in reality, Will and Uncle Bob have gone missing… The final story takes place in space, in the future (possibly “sooner than we’d like to admit”), with the pair moving on to the next universe. It’s quite a leap from the previous collection, moving from a mysterious local phenomenon to a grand, ageless one. Hard to know what to make of it. I suppose it all depends on where the series goes next. 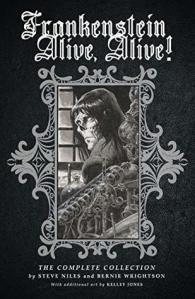 The final horror collaboration between writer Steve Niles and artist Bernie Wrightson began in 2012, with the third issue taking until 2015. Wrightson passed away in 2017, so it looked like an aborted project, as I noted in my earlier review. To repeat my summary: this series is a classic sequel to the original Frankenstein tale–the Monster’s life after escaping the villagers at the end of the book. Wrightson’s art is splendid, and apparently was scanned in color from the original inks. So although it’s basically black and white, you can see more detail, close to looking at the original pages. It is some of the most striking artwork in his long and distinguished career. It turns out that Wrightson had worked on another issue, and selected veteran horror artist Kelley Jones to complete it. I remember the series being announced as an ongoing title, and the third issue concluded with “to be continued”–so I don’t think it was intended to be a four-issue miniseries at the outset. But Niles clearly figured out a way to get to a satisfying conclusion in four issues. The third issue left the monster in the home of the sympathetic Dr. Ingles, who had protected him and given him access to his large library. Ingles appears increasingly unhinged, determined to use a woman’s newborn child to revive his dead wife. Frankenstein rescues her from the burning house, and assists with the birth of her child. After finding a safe place for them, he continues alone, secure in the knowledge that “any creature of this world, whether born by science or sorcery, deserves to live.” So the monster finds empathy, and forgives himself for his past: not really “The End,” but satisfying nonetheless.  Kelley Jones did a wonderful job completing Wrightson’s work. You can tell them apart if you’re looking for differences, but the story flows smoothly.