The Grass Kings team of Kindt and Jenkins reunite for this thriller, which basically is a Young Adult version of Kindt’s Dark Horse series Mind MGMT (the story refers obliquely to both of those series, but does not require prior knowledge to understand this story).  The titular Black Badge is a team of Boy Scouts tasked with covert operations: they go into dangerous situations that adults could not, protected by the appearance of childish innocence.

So they cross over from South Korea to North Korea to mark a scientist for capture, confident that they will be seen as lost kids when caught. A second mission takes them to Siberia to break an inmate out of prison. When sent to Afghanistan to smuggle a spy across the border to Pakistan they take the opportunity to investigate the disappearance of a former team member, which gives them reason to question their role.

It’s all pretty lightweight compared to Kindt’s usual work: one mission per issue, with limited space for complications (or character development). Jenkins provides distinctive character designs. His backgrounds tend to be minimal, but there’s always enough detail to tell the story effectively. The collection includes Kindt’s usual background creations, including a set of merit badges with names like “Household Explosives” and “Alternate Weaponry.” There is also a large collection of alternate covers, plus Kindt’s development art and a “New Recruit Aptitude and Personality Questionnaire.” 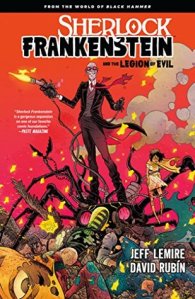 Despite the title, this prequel set in the Black Hammer Universe is mainly about Lucy Weber uncovering the truth about her father, the Black Hammer. The opening is Black Hammer #12, set ten years ago in Spiral City, which shows the memorial service for Black Hammer and the other heroes who defeated Anti-God. Lucy is proud of her father, misses him, and resents the fact that her mother won’t let her acknowledge him. She’s convinced that the heroes are not dead, and so is retired hero Doctor Star: when she becomes an adult he gives her a message from her father, which contains and address and a key. There she finds the Hall of Hammer, her dad’s secret hideout.

His recorded message tells her to destroy the place and forget about the Black Hammer. But she doesn’t believe he’s dead, and is determined to find him. The search leads her to Spiral Manor, home of many of the supervillains her father fought. And Sherlock Frankenstein is the biggest and baddest of them all. In the course of her investigation she learns that the relationship between the superheroes and supervillains was more complicated than she thought. Sherlock had a relationship with Golden Girl, and may have been on his way to help the heroes in their final epic battle. When she finally tracks him down, he resists her inquiries–than apologizes and promises to do something about the current lack of heroes in Spiral City. Great potential for future stories.

David Rubín’s art style is different from regular series artist Dean Ormston, but it is compatible, and he makes an effort to stick with existing character designs. He also gets to create some of his own, all of which is explored in an extensive Sketchbook section. He apologizes for the heavy usage of double page spreads in the fourth issue. There are a lot! The whole collection is a delightful expansion of the main series. It’s a blast to read, even for an ex-superhero comics reader like me. 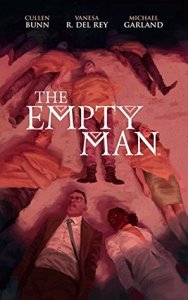 Horror writer Cullen Bunn has been so prolific that I completely missed this one. The Empty Man is a disease with bizarre (and varied) symptoms: hallucinations, fits of rage, suicidal acts, and finally death or a catatonic state. It seems to behave like a disease, but the cause and means of transmission are unknown. The process is so mysterious that cults arise that see the disease as some kind of spiritual transcendence.

The story is largely told as a police procedural, through the eyes of an FBI agent and a CDC investigator who are partnered in the joint investigation. This leads them to cult members, as well as the faith healing preacher whose small congregation at the beginning of the series has grown into a megachurch. The story goes completely mystical at the end, as The Empty Man appears to be a being who lives across a doorway in a purely mental realm.

The series ends in a kind of cliff-hanger. There has been a sequel, but I don’t know if it picks up where this one left off. It is hard to see how a sequel could make sense of this, as it travels to such strange territory. It’s not a convincing narrative: the mystical turn at the end feels completely unprepared, a surprise that does not really explain everything that went before.

I liked Vanesa Del Ray’s art on her debut series Hit, and I like her covers for this series. But the interior art is sketchy enough to be distracting, which is the same reaction I have to her work on Jordie Bellaire’s series Redlands. Between that and Bunn’s confusing, inconclusive story, this was a less than satisfying read.