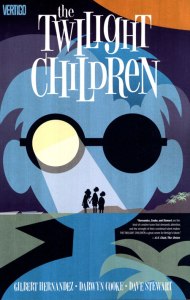 Gilbert Hernandez and Darwyn Cooke: an unlikely pairing, or a dream team, depending on your perspective. I vote for “dream team,” because Cooke was always good at illustrating anything with a strong story and little continuity to adhere to. This four-issue miniseries shares the magical reality of Hernandez’s Latin American Palomar stories in Love and Rockets, but it is a fresh group of characters.

The central event is the appearance of mysterious glowing orbs, which appear in many places in the village, then disappear by morning. Their effects are dramatic: they blind children, then give them psychic abilities; destroy homes; and make entire families disappear. The local sheriff does his best to cope, but the orbs have also attracted outsiders, each with their own agenda: scientists, government experts, and secret agents.

A mystery woman named Ela has also materialized on the beach along with one of the orbs. Her role is unclear, but she exerts an odd fascination for many of the villagers, young and old alike. She eventually declares herself to be an enemy of the orbs, and savior of the town (indeed, of the whole world). The climactic showdown appears to destroy Ela and her allies, but returns the town to normal (including several residents who had disappeared). It’s all a bit surreal, but undoubtedly a happy ending.

The back matter includes Hernandez’s character designs. It’s interesting to see how much Cooke changed many of them. The final characters are more distinctive and differentiated, while still retaining the Latin American look of the original designs. It was an effective collaboration: it’s a shame there will not be more. 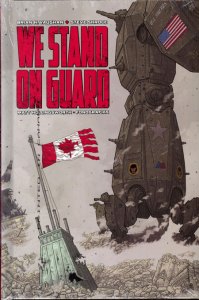 We Stand On Guard is set 100 years in our future, and imagines a time when water is such a precious resource that the United States would invade Canada over it. The story opens with TV footage of a terrorist attack on Washington, D.C. No one has claimed responsibility, and a Canadian family is speculating on the possibilities: Algiers? Home-grown American terrorists? Suddenly they are interrupted by the sound of a U.S. missile attack, which kills both parents but leaves the two kids (a boy and a girl) with only minor cuts and scrapes.

Flash forward another twelve years, and the girl (now a young woman) encounters a band of Canadian freedom fighters. Much of the story centers around their efforts to fight back against the U.S. military invasion–beginning with taking down a huge military robot–interspersed with a few flashbacks giving background on the invasion, as well as what happened to the two siblings after their parents died. There is no question that the Canadians are portrayed as the good guys, and the Americans as an an evil invading force. For American readers it definitely turns the tables on the usual heroic narrative.

I can only imagine how readers elsewhere in the world would respond. Canada is probably more liked and trusted than the U.S. (especially currently), but this miniseries was created long before the recent Presidential election. Apart from the moral center of the story, it’s really a somewhat predictable, albeit slightly futuristic, take on domestic armed resistance. The homeland calls them freedom fighters, the invaders call them terrorists. I expected more from Vaughan. It’s a solid enough story, but nothing remarkable.

Snotgirl is Lottie Person, a glamorous fashion blogger–except for the extreme allergies she keeps secret (which explains the snot). So it’s not nearly as gross as it sounds; in fact the allergies humanize a character who is otherwise all about surface impressions. On the surface, she’s gorgeous and successful. Behind that mask, she is lonely and full of insecurities. Looking at her friends, she has good reason for the insecurity. They’re mostly fellow fashion bloggers, so they are also all about presenting a beautiful front at all costs. And they tend to turn on one another in a heartbeat if it will gain them social media points.

Those allergies play a key role in a major plot point. Lottie starts taking an experimental allergy medication, and while there’s no discussion about the possible side effects, the bottle contains the ominous warning “Do not operate heavy machinery or make important life decisions.” As things develop, it starts to become increasingly difficult for her to believe her own memories of events. She makes a new friend, who may or may not have died during a night out together–and when she reappears, is she even real? Or was she ever?

Lottie has become the quintessential unreliable narrator: there’s simply no way for her (or us) to trust the evidence of her senses. By the end of these first five issues in the series that has become the main story driver. It will be my main reason for following the series going forward, because the characters tend to be pretty unlikable. I can readily stipulate that I’m probably not the target demographic, since it seems strongly focused on contemporary young adults. Not being one of those (or a professional blogger, if that’s even a thing), I frequently found it hard to relate to the characters. There have already been moments of humanity for some of them, so I have hope that they will become richer as the series progresses. Almost forgot to talk about the art. Hung seems like a perfect match for this story. Her art is like a manga-influenced version of an Archie comic. A bit more representational than O’Malley’s cartooning on previous comics like the Scott Pilgrim series, but along the same lines.