It’s easy to describe this as “Astro City meets Stand By Me” or something like that. The main story driver is the discovery of the body of superhero Plutona in the woods by five suburban kids (Jeff Lemire’s story “Plutona’s Last Adventure” runs through the collection, telling how she got there). The group decides that it would be best not to report it to authorities (including their parents) right away, because of the chaos it would create as the city came under attack by super-villains in the absence of its strongest protector. The everyday presence of super-humans is established early: one of the kids is even a spotter who monitors their activities, Trainspotter-style.

But the heart of the story is the relationships among the kids. Their response to the situation tends to mirror their normal behavior. Teddy is the fan who keeps a log of super-activity; Diana is overweight and insecure; Mie is Diana’s friend, and is cool in the way Diana wants to be; Mike is her younger brother, who usually tags along; and Ray is the bully who is both longtime friend and tormentor. Given that Teddy is a superfan, it probably shouldn’t be surprising that he becomes obsessed with the body. Mie starts to take a romantic interest in Ray, driving a wedge between her and Diana.

Ray and Mie follow Teddy into the woods a couple of nights later, and find him cutting Plutona’s fingers and his in an effort to get super powers through her blood. He becomes almost completely unhinged, threatening them with his knife. In the ensuing fight he accidentally gets stabbed in the chest–then hit over the head with a log when Diana arrives and sees the struggle. Plutona comes to, groggy and confused (I know that’s a spoiler, but it is called Plutona, after all–doesn’t seem likely she’d be dead at the end). She takes off, warning them not to tell anyone how they found her. And the group goes home, leaving Teddy in the woods, possibly dead.

Which looks like a setup for more story, but that’s the end. I went into this thinking that it was an ongoing rather than a miniseries, and it is paced like an ongoing most of the way. There’s a rushed feeling at the end to wrap things up in five issues. Still a rich little story, with mystery, superheroics and coming-of-age intertwined. A good read, but it felt a little cramped. Emi Lenox’s art has a real Young Adult indie vibe to it, like she’s drawing character types she knew in school, just a few years ago. It’s readily distinguished from Jeff Lemire’s “backup story” (for lack of a better description), but the two styles are quite compatible.

Paul Cornell has written comics for Vertigo, DC, and Marvel, and for the Doctor Who TV series. That was enough to interest me in an advance copy of this novel. None of his previous work prepared me for this, although Vertigo comes closest. It tells the story of a British schoolboy named Andrew Waggoner during the Margaret Thatcher years (the 1980s). Andrew is a social outcast at school, desperately trying to avoid the school bullies, led by a boy named Drake. But one night they force him into the woods outside of school, and their taunting leads to a horrific act of physical mutilation–far outside the usual bounds of bullying. Andrew chooses to hide the event from his parents and the authorities, a decision that is psychologically convincing in context: such an accusation would mean he could never hope to fit in.

But it sends him into a dark place. Andrew finds himself in the the hills of the West Country, where a chalk horse marks a site of ancient power. There his dark half emerges, a being he always refers to as Waggoner, as if he was a separate, distinct person that normally only Andrew can see and hear. Waggoner is the soul of vengeance and rage. He tells Andrew that he can only be healed and made whole through sacrifice. One by one Andrew’s torturers are killed in terrible ways, which somehow are always made to look like accidents.

At the same time Andrew is trying to make his way at school. Surprisingly, he becomes part of Drake’s crew. Drake’s girlfriend is obsessed with tracking the Number One hits on the pop music chart each week, which she treats like auguries of the future; Andrew also marks his life by them. There are also frequent references to Doctor Who, which I imagine would be appropriate to the time and place even if Cornell was not connected to the show. All of this teenage angst forms an ironic counterpoint to the horror. And in fact Andrew often seems emotionally disconnected from it, since it’s being done by his double, not him. The story often keeps that connection blurry: is Waggoner a psychological construct that frees Andrew to do things he could not, or is he a real independent being? It’s never completely resolved, but the climax makes it appear that the ancient world of magic is real–and Andrew makes his choice.

Chalk is deeply unsettling, which is surely a sign of its power, although it also makes me hesitant to recommend it. The closest comparison I can make is to the work of Clive Barker, where humans can fall into the deepest pits of evil. 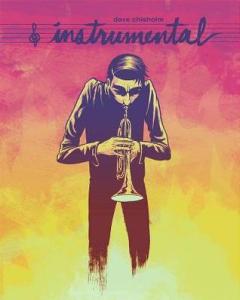 With Instrumental trumpeter/composer/cartoonist Dave Chisholm presents a black and white morality tale about a struggling young trumpeter and bandleader–with an accompanying soundtrack. There have been previous instances of visual/musical collaborations: I think of Alan Moore’s The Birth Caul (and other “workings”) that involved spoken word and music, in some cases later illustrated; more recently, songwriter Jonathan Coulton commissioned a graphic novel version of his album Solid State, written by Matt Fraction and illustrated by Albert Monteys. But Chisholm is the sole creator here, having written and illustrated the graphic novel as well as composed the accompanying music (which features his trumpet playing). The comic and the music can be fully experienced independently, but the combination gives additional resonance. Chisholm’s cartooning would be at home with a publisher like Fantagraphics.

The protagonist in the comic is a young trumpeter named Tom who feels like he’s in a rut. He’s good but not great, and leads a quintet with a regular gig, but doesn’t seem to be going anywhere. A stranger approaches him after a show and tells him his playing wasn’t very good–to which Tom readily agrees. When he offers Tom an old trumpet, Tom accepts, not really expecting anything to come of it. Later he takes it out and starts playing, and the effect on his playing is electric: it’s as if the heavens open up. When he plays it at that night’s show his playing is so inspired that the band plays for hours to an unusually enthusiastic crowd. The joy of the occasion is dampened by the sudden death of an audience member, by apparent heart attack. This is the first indication that Tom may have unintentionally made a Faustian bargain (there was the sound of something falling above his apartment earlier, which turns out to be a neighbor who had died).

Initially Tom is on such a creative high that he barely notices that anything is wrong. But he becomes very protective if anyone asks him about the trumpet, and when a couple of guys approach him demanding the trumpet back, he runs away. They are eventually revealed as members of the religious cult that appears in a short vignette at the beginning of each of the seven sections of the book. They know where he lives, so he is forced to stay away from home for days, going on a series of extended overnight odysseys. At an after hours jam session he encounters the late saxophonist John Coltrane, who counsels him to be open to the Truth, so he can express it in his music. When the band lands a high-profile gig at a prestigious club he meets the mystic Russian composer Alexander Scriabin (also long deceased), who lectures him on the difference between apocalypse and Armageddon: apocalypse means the transformation of the world, while Armageddon means the destruction of it. He tells Tom his playing would create Armageddon, which ties in with all of the natural disasters that have been happening in the world since Tom started playing the cursed trumpet.

It turns out the decision is taken out of Tom’s hands, as one of his pursuers attacks him and attempts to take the trumpet. Tom has an out of body experience–a vividly illustrated death and transfiguration sequence, which includes his life passing before his eyes in a montage of images. When he is revived he has a new perspective. The cult does not get their trumpet back, but Tom throws it into the ocean, realizing it’s bad for him.

The soundtrack can be heard for free on Bandcamp (using the “name your price” model) and also comes as a download code with the printed comic. In addition to having seven tracks with titles that match the section titles in the book, the instrumentation parallels the illustrated band: a quintet with trumpet, guitar, piano, bass, and drums. Since Tom’s band is playing his original music, the soundtrack quite literally represents the cartoonist’s concept of what their music would sound like. There are a few places where there is literal tone-painting going on (e.g. the atmospheric electronics and “Dies Irae” riff on “Death and the Narrator”), but for the most part it’s solid contemporary jazz of the sort that could be heard in the clubs depicted in the story.

UPDATE: You can read my review of the accompanying soundtrack album here.