Posted on September 3, 2012 by marksullivan5 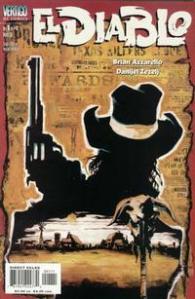 El Diablo #1-4 (written by Brian Azzarello and drawn by Danijel Zezelj) is another Vertigo update of an old DC character. I understand the character is back in the new All-Star Western. This version focuses on Moses Stone, a small town Western sheriff who leads a posse in pursuit of El Diablo after Diablo kills several men in the saloon. Through most of the series, the actual existence of El Diablo is in question. We see members of the posse reacting to him, but it could all be psychological. It’s the sort of modern realism that typifies Vertigo updates of older DC characters. But it works very well here, as the suspense builds and we learn many dark things about Moses Stone. There are reasons why the spirit of vengeance might be after him. In the end Stone’s fate seems inevitable. 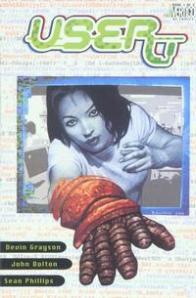 User #1 – 3 was a prestige format series written by Devin Grayson, and illustrated by John Bolton & Sean Phillips. It’s about a young woman with a troubled home life who becomes increasingly involved in an online role playing game. The gaming aspects of it are now rather dated technologically (although one could substitute some other Internet addiction and the story would work as well), but the split between her real life and virtual life is easy to follow, since Bolton illustrates her virtual world and Phillips illustrates everyday life. I have more of a personal relationship to this series (and El Diablo) than the previous Vertigo minis I’ve reread. They were the first Vertigo miniseries I originally read in real time, and I remember buying them after just getting a new job, which made them affordable. It’s unfortunate that the story is so rooted in text-based role playing, because I think it holds up quite well dramatically. Strong enough to warrant a collection, but in the meantime it’s pretty easy to find in back issue form. 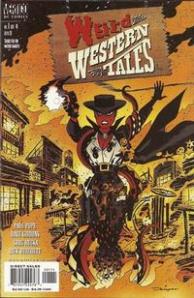 Weird Western Tales #1 – 4 turned out to be the final anthology miniseries (and the ongoing Flinch anthology ended about the same time, ending Vertigo’s biggest experiment with the anthology format). I don’t know if I’m getting tired of the whole anthology approach, but these stories were especially unsatisfying overall, despite all the great creative talent involved. It’s an impressive list: Paul Pope, Dave Gibbons, Greg Rucka, Marcelo Frusin, Joe R. Lansdale, Danijel Zezelj, Eduardo Risso, Peter Milligan, and Duncan Fegredo are just a few of the writers and illustrators represented. These are eight-page stories, all with a twist ending, like a very brief Twilight Zone episode. That’s a tricky format to pull off, and none of these stories totally paid off at the ending, although some were better than others.

The Vertigo remake of  Angel and the Ape 1 – 4 (written by Howard Chaykin and David Tischman, with art by Philip Bond and covers by Arthur Adams) takes some liberties with the original, but it again features private detective Angel O’Day and her sidekick Sam Simeon. Sam is still a comic book artist in this version–which creates opportunities for lampooning both Vertigo and parent company DC–but he does not speak. Having him mugging instead of talking really doesn’t make the story any less zany, it just means that Angel has to talk a lot (and spend a lot of time naked or in her undies). I swear I’ve never read a comic where a woman changes clothes so often, and on-panel at that. Between all the silly character names and the kinky sex jokes it’s easy to forget that there actually is a murder being investigated. That mystery is solved right at the end of the series in a classic scene where all of the suspects are called together in a room and the guilty party is tricked into a confession. I don’t think the reader is given a fair opportunity to figure it out on their own, but this is obviously not a serious detective story.