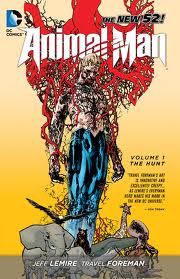 Amimal Man was the character that broke writer Grant Morrison into American comics. He took a minor superhero character and made him interesting enough to carry his own series. Buddy Baker’s powers were truly central to the character: he takes on animal abilities, which causes him to champion vegetarianism and animal rights. Another defining factor was Buddy’s family relationships, which played a significant role in the stories. That was a rarity in superhero comics then, and still is today. Lemire takes up the story just about where Morrison left off, ignoring the changes Jamie Delano made during the later Vertigo run on the title. The fact that it isn’t a Vertigo title isn’t stopping it from being more horrific than it ever was during the original run, even the Vertigo issues. It’s really fast-paced, too, almost to the point of making it hard to follow at times. But that’s a nice problem to have.

The story opens with Buddy in a career quandary. He has been more active as an animal rights spokesman than as a superhero recently. His previous film work as a stuntman has led to a starring actor role (which we get to see in a later issue in the collection). When he goes into action as Animal Man he discovers a strange disturbance in the Red, the source of his animal powers. After his young daughter Maxine begins to exhibit animal powers of her own the two of them travel to the Red, which turns out to be an actual place. It is inhabited by totemic beings who tell Buddy that the origin of his powers was quite different from what he thought. They battle an agent of the Rot, a rogue nature force that is attempting to undermine the Red. Meanwhile the entire family must go on the run to escape other Rot agents. When the family is reunited the battle results in a catastrophic infestation of all the world’s animals. Only Alec Holland (the Swamp Thing) can help. Thus the two relaunched ex-Vertigo characters come together early on. I have not read the new Swamp Thing yet, but now I have another reason. This is a terrific start to the new series. I must admit that Travel Foreman’s highly stylized artwork takes some getting used to, but it’s very well suited to the horror that is so central to this tale. 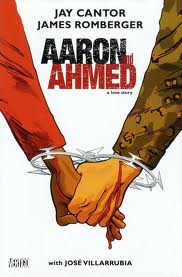 Aaron and Ahmed  is a Vertigo graphic novel written by screenwriter Jay Cantor and drawn by James Romberger, with colors by José Villarrubia. It starts out trying to address a serious question: how are terrorists created? When psychologist Aaron’s wife is killed in one of the 9/11 aircraft, he is driven to join the War on Terror in a personal way, which leads him to prisoner interrogation at Guantanamo Bay. He becomes closer to prisoner Ahmed, in an effort to gain intelligence on jihadist activities. The two men engineer an escape, so that Aaron can join the terrorists and become a sleeper agent. There is some question about who is using who: has Ahmed really given up his beliefs, and has Aaron finally “gone native,” taking on so much of the appearance of a terrorist that he has effectively changed sides? But by the end the story has bogged down with a bunch of talk about memes, and the psychologist protagonist has completely lost his way. I can’t even say what point Cantor was trying to make, unless it’s that trying too hard to understand terrorism can make you go crazy. I’ve never liked Romberger’s style very much, but I think he holds up his end pretty well.

Blood-Stained Sword collects two early Ben Templesmith projects: “Blood-Stained Sword,” a Samurai-themed story about corporate evil and revenge (written by Dan Wickline); and “Demon Father John’s Pinwheel Blues,” an odd story about a child vampire (written by Amber Benson). The title story was good: it was fun to see Templesmith illustrate action instead of horror. Still plenty of blood, though. The vampire story felt episodic, and didn’t have sufficient length to fully establish the title villain before dispatching him at the end. As far as I can determine, the original publication dates were 2004 – 2005. Templesmith’s first published comics came out in 2002 (including 30 Days of Night), so I’m not sure how accurate it is to label these stories as “early,” unless they were actually created some years before the original publication. His visual style certainly appears to be well in place.

Gone To Amerikay (written by Derek McCulloch and illustrated by Colleen Doran) uses three intertwined tales to illuminate the Irish-American immigrant experience. The heart of the story is Ciara O’Dwyer, who arrives in New York with her infant daughter in 1870. Johnny McCormack arrives in 1960, dreaming of an acting career. And Lewis Healy arrives in 2010 by jet. He’s the only one who has not travelled by sea, and technically he’s not an immigrant: the official reason for his visit is the opening of a new business office. The parallel storytelling is made explicit right from the start. Each immigrant gets a page showing how they arrived in America, followed by a splash page with a wide view of New York Harbor in each era. But after the opening sequence the stories simply flow into each other with no visual demarcation when the scene shifts to a different time. I’ve seen stories set in different time periods that used visual markers to signal the time change, such as a different background color for each, or a different lettering style. Doing without those markers serves to emphasize the commonalities in the immigrant experience here, I think.

Ciara has arrived without her husband, who is to join her later, so she must find her way in the notorious Five Points slum with the help of relatives. Life was hard, and the narrative does not gloss over the ugliness and corruption that were part of the backdrop of daily life. Ciara becomes involved with a shifty character named Tim Shea, who winds up being her unintended savior. Johnny quickly moves away from acting to become involved in the folk music scene, where he finally becomes a star. His appearance on the Ed Sullivan TV show is one of the final scenes in the book. But first he is inspired by a ghostly apparition, which is where the tale takes an unrealistic turn, becoming a ghost story. There we finally get the explanation for what happened to Ciara’s husband Fintan, as well as the genesis of Johnny’s breakout hit song. Thus the connection is made across the years, perhaps a bit too neatly. How does billionaire Lewis figure in this? He was inspired by hearing Johnny McCormack’s recordings, and his wife has tracked down Ciara’s real life history to satisfy his curiosity. It’s a thin connection at best–arguably the story could have been told without him–but it does illustrate the changes in the fortunes of the Irish, and gives Doran an opportunity to render modern New York scenes to contrast with the earlier ones. Despite my slight reservations I would call this one of Vertigo’s most successful original graphic novels. Doran’s art is gorgeous, some of the best of her already distinguished career.

If you’ve read Gone To Amerikay, you know that it is full of references to music. There are Irish folk tunes and jazz, in addition to a couple of original songs. Colleen Doran posted a link to a streaming playlist that contains versions of most of the songs (except for the imaginary original tunes):

You have to register first, but it’s fast and free. I wish it could have used a more traditional version of “Johnny, I Hardly Knew Ye,” but it’s still pretty cool.

And a further update: Derek McCullough’s article for the Largehearted Boy blog goes into much greater detail about the songs in the book, including some that are not included in the playlist.