Sarah Glidden (Vertigo, 2010)
How To Understand Israel In 60 Days Or Less

I picked up Sarah Glidden’s How To Understand Israel In 60 Days Or Less a bit late, but of course it is no less relevant to the Israeli/Palestinian conflict than it was in early 2010 (the paperback will be out in late August). Glidden took a “Birthright Israel” tour to see the situation first hand, having already made up her mind, or so she thought. She came to Israel with strong Palestinian sympathies. As she met contemporary Israelis and toured historic places she began to understand the Israeli perspective better. Much to her surprise, she found herself feeling a connection. Although she did not shift to total support of Israel, she came to a more well-rounded perspective. Or, you could say she returned from the trip confused about her feelings and beliefs! This seems a reasonable reaction to a complex situation. While all of this heavy emotional turmoil is going on, the story is also a true travel memoir. Glidden gives rich portrayals of her tour group, warts and all, and does not spare herself. Parts of the tour are patently manipulative, and others are unrealistically “touristy” (she describes the Bedouin camp they visit as being like Epcot). The book works on a personal level, while also giving a lot of history (there’s even a brief Glossary, Bibliography, and Timeline of the history of the state of Israel in the back).

This graphic novel brings back the original writer of the Hellblazer series to commemorate the 25th anniversary of John Constantine’s first appearance in Alan Moore’s Swamp Thing. Delano has been away from Constantine for awhile, but he still voices him like a native. I would argue that Delano really created Constantine as a serious ongoing character–Moore’s character was a mysterious cipher–and he puts Constantine back on like a comfortable old jacket. Jock previously illustrated one issue of Hellblazer during Mike Carey’s run; his return here is so well matched to the character that I wonder why he has not done more work with him. This story puts Constantine into a truly hellish setting, the war zone of contemporary Iraq. A prisoner of war has confounded all attempts at interrogation, somehow driving all of his interrogators mad. The CIA frames Constantine for terrorist activity (with the cooperation of a mysterious Muslim woman named Aseera), forcing him to take on the interrogation. He soon concludes that the prisoner is a djinn in the service of his old friend, the demon Nergal. Shortly after that all Hell breaks loose, in the form of a demonic rescue force: Constantine and Aseera escape, but soon find themselves captured by insurgents. This leads to a classic Hellblazer situation, with Constantine playing a demonic game for their souls. When he wins (was there ever any doubt?) he brings the genie in a bottle back to his CIA captors, giving them a taste of their own medicine. Pandemonium is both a classic Hellblazer story and a contemporary update. Mention should be made of Jock’s use of color. The basic approach is monochrome, with color used to help establish setting. Hell is colored red, naturally: simple but effective.

Gwen Dylan works as a grave digger, which is useful: it gives her ready access to human brains. She has to eat at least one brain a month, or she’ll turn into the traditional shambling zombie of horror movies. Plus there’s another twist. She gains the memories of the brain’s previous owner, and feels compelled to seek justice. The current victim was murdered, and Gwen’s investigation leads her to a mysterious mansion. Along the way she gets help from her friends Ellie (a ghost) and Scott (a were-terrier). They cross paths with a group of vampires in town, who run a business called “Blood Sports Paintball” which provides them with after-dark paintball players to feed on. And, we learn of an ancient society of monster hunters. They’ve come to town to investigate the recent increase in “postmortem activity.” All of this in the first five issues of the series! Roberson has found a fresh take on the monster story–he even shares a theory explaining the genesis of all of them–and Allred’s illustrations are realistic, yet light-hearted at the same time. As this collection draws to a close, the mysterious ancient has made Gwen a proposition; she’s begun to get romantically involved with one of the monster hunters (without realizing it); and the vampires are preparing to confront the monster hunters, who have killed one of them.

This collects a single eight-issue arc, focusing on an isolated Viking settlement. The town has fallen prey to a violent contagion just as the brutal Northern winter starts to set in. The foreigner Boris has wild theories about communicable diseases, and has the ear of the town elders. The difficult decision is taken to expel the sick and seal the gates.This leaves the settlement isolated through the long winter, while warlord Gunborg jockeys for political position, and the group faces starvation, subzero temperatures, and the treat of the plague. We see all of this through the eyes of the newly widowed HIlda, once wealthy, now struggling for survival and protection. Her only goal is to see her eight-year-old daughter safe through spring. It’s a horror story of survival, with the multiple issue length for once in full service of the story. The endless winter slowly marches on, and desperate people do desperate things. A dramatic combat between Boris and Gunborg leaves Boris in charge, but Hilda and her daughter must leave the city for their own safety. The final part begins with a memory of summer, the first break in the relentless cold and snow. But in the present the refugees are in dire straits, and finally it is daughter Karin who finds the strength to forge on and find refuge. The story ends with many things unresolved, but it’s a satisfying victory for the women, proof of their triumph over adversity.

The supernatural Western enters a new phase. After defeating General Hume in the first collection (but remember, he’s been dead before), Drake, Becky, and Gord go to New Orleans to plan their next move. Becky keeps her enchanted gun close by, but Drake hides his four pistols and goes in search of a way to sever his connection to them. Since the weapons can only be taken when their owner is dead, things never end well. Gord’s research shows the guns to be far more powerful than they had realized: indeed, the full set is reputed to have Apocalyptic, world-ending power. To prove that point, elemental supernatural forces begin to move in on the group. And Becky becomes involved with a handsome stranger named Kirby Hale, whose intentions may be less than honorable. The group fends off a demonic attack, with the help of some new allies. As this arc comes to a close, Drake and Becky accompany the priests known as the Sword of Abraham as they take General Hume’s body to a safe location for storage, while Gord continues to seek the books that may contain answers to the question of how to get rid of the guns permanently. 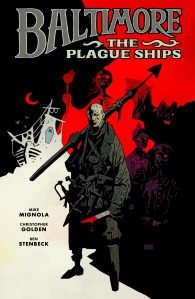 Baltimore tells the story of Lord Baltimore’s quest to rid the world of a vampire scourge in a world afflicted with plague. Baltimore had been a soldier in the trenches of World War I, when he attacked a vampire who was feeding on fallen soldiers. In his eyes this led directly to the plague and the increase in vampire activity. And it’s personal: the vampire Baltimore wounded comes for Baltimore’s entire family, even some recently fallen to the plague. While pursuing the vampire by sea Baltimore and his companion Vanessa find themselves shipwrecked and marooned on an island full of beached submarines and a plague ship. As night falls the dead begin to rise, leading to an epic monster battle. When the pair is rescued Vanessa decides to head home, where the Inquisition is questioning her mother about Lord Baltimore. This is sure to have repercussions as the story unfolds. Mignola has found sympathetic new collaborators in writer Golden and artist Stenbeck. The story has the feel of the Hellboy/B.P.R.D. Mignola-verse, without making any reference to it. This collection concludes with a Sketchbook which includes character sketches and pinup pages.

Creator Scott Snyder continues his vampire tale without the marquee value of Stephen King’s name in this second collection. There’s little visible change in the writing, which is still consistently sharp and creative. The big story is the four-issue arc “Devil in the Sand,” which is set in Las Vegas in 1936. The town is still in its infancy, a rough place dominated by the nearby construction of the Hoover Dam. Police chief Cash McCogan has his hands full under normal circumstances, but is confronted with a series of murders in which the victim’s blood has been completely drained. His first suspect is Skinner Sweet, proprietor of an establishment in the red light district. But it soon becomes clear that there are other, older vampires involved. And a secret society of vampire hunters is introduced, called the Vassals of the Morning Star. They call on Pearl Jones in California seeking the secret weakness of the new breed of American vampire, while another pair working as FBI agents assist McCogan in Vegas. Pearl’s husband Henry reveals the secret to them, which puts Skinner into a new kind of danger. The second two-issue arc “The Way Out” is entirely illustrated by Mateus Santolouco, an artist new to the series (he assisted Albuquerque on some issues in the previous arc). We find Pearl’s old roommate Hattie Hargrove held captive by an old vampire who is experimenting on her to find the fatal weakness of the American vampire. In the end she escapes, intending to have revenge on Pearl. But Pearl and Henry have already moved on, creating another new ongoing plot line. Santolouco’s style is a change, but it’s quite compatible with Albuquerque’s. Also, I note that Vertigo is staying with the practice of not giving American Vampire collections a subtitle, which I’ve not seen before (from any publisher outside of manga that I can think of). I predict they’ll get added when the collections are reprinted somewhere down the line. Seems to me it would make them easier to find spine-out on a bookshelf. 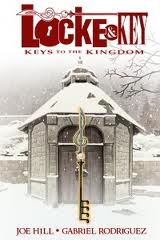 This series continues to surprise. There are visual experiments: the first issue revolves around a tribute to Bill Watterson’s comic strip Calvin and Hobbes, while another issue includes a war comic parody called Squadron Strange. Zack’s cover is starting to slip, as more and more evidence of wrongdoing points in his direction. When his dead ally Sam reappears, Zack makes a bold move–involving one of the major characters–that will have a huge impact on the series going forward. At the same time there are signs of compression in the storytelling: a number of new keys are introduced in brief vignettes, where an entire issue might have been built around them earlier in the series. I believe the story will conclude in two more collections, so maybe Hill needs to do that to get it all in. It may also just be the creative team flexing their storytelling muscles, trying new approaches and pacing.