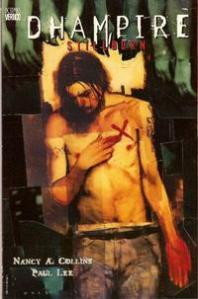 Back in 1996 with Vertigo, I read Dhampire: Stillborn, a Prestige format one-shot by Nancy A. Collins & Paul Lee. Title character Nicholas Gaunt is a dhampire, a half-human, half-vampire hybrid (most are stillborn at birth, which explains the subtitle). Nicholas doesn’t know much about his family history at first, only that he’s always been hounded by dark thoughts. While undergoing hypnosis as part of his treatment after a suicide attempt, he remembers a sister that he didn’t know he had. He begins investigating his family history, and finally meets his sister (who turns out to be his mother). She is a vampire, and explains his condition to him, which explains a lot about his strained family life and his emotional state. She also tells him what he must do to become fully undead. Following her instructions, in the end he becomes transformed and joins his mother. This was heavily promoted as a prelude to an ongoing series: apparently the project was derailed when editor Lou Stathis died. So it’s an odd freestanding tale. Presumably the series would have followed Nicholas’s life as a vampire, which kind of defeats the purpose of the “dhampire” title. Paul Lee was new to comics at the time (I remember him later for Midnight, Mass and the Hellblazer/The Books of Magic crossover, and he’s also done a lot of work for Dark Horse). He turned in a lovely painted comic here.

The same year Vertigo reprinted Blood: A Tale, a “hallucinatory vampire story” (as the Wikipedia article describes it) written by J.M. DeMatteis & painted by Kent Williams.This was the followup to Moonshadow, and was also originally published by Marvel’s Epic imprint. Marvel and DC both published trade collections, now out of print (although there are copies around). Just when Blood was looking like a hopelessly confusing mystical mess, DeMatteis pulled out a very effective ending. The story within a story framing device came into focus, and the story came full circle. The end is literally the beginning. I still can’t help but compare it to Moonshadow. I think Moonshadow was a far better story, because it never lost sight of the fact that it was the saga of the main character’s journey from innocence to experience. No matter how mystical it became, there was a concrete narrative for the reader to hang on to. This story explores a similar theme, but it’s much harder to follow. Kent Williams contributed absolutely gorgeous painted art, though. It’s certainly worth seeing for anyone interested in his work. 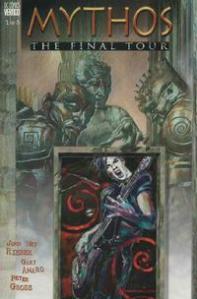 Mythos: The Final Tour was a three part Prestige format series written by John Ney Rieber, and illustrated by a different set of artists for each part (Gary Amaro & Peter Gross; Peter Snejbjerg; and Teddy Kristiansen, Dean Ormston, Gary Amaro, & Dick Giordano). It’s an interesting concept, featuring a rock musician named Adam Case who talks to gods and is being manipulated to bring about the end of the world. These old gods are trying to get by in the modern world, much like the “Brief Lives” story arc in The Sandman. In the course of the story Case meets John Constantine, and Suzi the Black Orchid even makes a brief appearance. In the end some of the gods decide they don’t want to end the world just yet, and Case gets a shot at redemption. It’s a pretty good story, but it was hard to avoid the feeling that it was Vertigo by the numbers: gods, demons, fantasy, angst, plus a couple of regular Vertigo characters for spice. Wouldn’t surprise me if they asked Neil Gaiman for permission to use some Sandman characters as well. 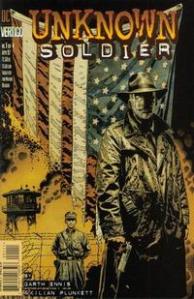 Unknown Soldier by Garth Ennis & Kilian Plunkett was a four part miniseries that revisited an old DC character. The Soldier was an intelligence agent with a disfigured face that was wrapped in bandages. This Soldier is portrayed similarly, but through most of the series we hear about his exploits second hand. CIA agent William Clyde begins following up on a list of names that have appeared on his computer mysteriously, and they each die just before or just after he finds them. Clyde realizes that the assassin is after him as well. The two of them are thrown together to solve the mystery of who wants all these people dead…and finally Clyde comes face to face with the one he has been seeking. It’s an exciting thriller, with dark commentary on the nature of U.S. involvement in international politics. The mini was collected into a trade paperback, now out of print.

Faultlines was a six-part miniseries by Lee Marrs & Bill Koeb. Tracy Farrand is visiting an old friend in a small mountain town, trying to recover from what looked like a nervous breakdown, but may actually be the sudden appearance of psychic sensitivity. Shortly after arriving she becomes involved in a search for a murder weapon, and is surprised by visitations from the ghost of the victim (who only she can see). She’s also picking up strange psychic vibrations from what later turns out to be some kind of nature spirit. As she gets closer to the murder investigation she suspects a member of a prominent local family, who turns out to be a werewolf! Quite a supernatural soup. The thriller aspects of the story work very well, but the role of the nature spirit never seemed clear to me, aside from opening up some Swamp Thing-like psychedelic scenes. The conclusion ties up the murder mystery nicely, but Tracy’s role as a sensitive is left unresolved. One notable thing about the look of the book comes from Marrs’ role as writer/colorist, a combination I don’t recall seeing anywhere else. In his “On The Ledge” piece Marrs talks about “the results of midnight hours on Photoshop graphics software.” The book has an unusual look due to the combination of Koeb’s somewhat sketchy style and Marrs’ psychedelic color palette, which is especially in evidence during the nature spirit scenes.