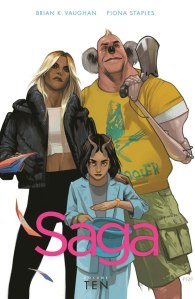 Saga finally returns after a long hiatus. The storytellers have not lost a step, but I confess that it had been so long that I completely forgot about Marko’s murder at the hands of The Will at the conclusion of the previous collection. Since this is not a superhero comic, he is most definitely dead for good. It is three years after his death, and his wife Alana and daughter Hazel (who continues to be the series narrator) are struggling to make a living on an occupied planet. The story opens with Hazel on the run from an angry shopkeeper she has stolen from. She is stopped by the militia and quickly has to magically shield herself from a terrorist wearing a powerful body bomb (powerful enough to leave nothing but her smoking boots behind).

Alana is trying to sell infant formula, but lacks an official medallion: so, she’s also a drug smuggler. When they meet a pirate ship, she agrees to make a dangerous drug delivery in exchange for a medallion (which would allow her to finally go legit). There are lots of other things going on as well. The Will brings Marko’s head to Wreath High Command to prove he finished the job, meeting up with Gwendolyn and Lying Cat in the process. She sends him to the Robot Kingdom to convince them that Marko killed Prince Robot IV: a reminder of the byzantine politics in the Saga world.

Landfall Secret Intelligence is also in the mix. They send Agent Gale to kill everyone that Alana has ever met. This includes some beloved characters, but fortunately he is not completely successful. The burning of the family tree spacecraft (which leaves them homeless) concludes the volume. It is implied that Gale may be the reason, but we will have to wait for the next story arc to know for sure. More than enough reason to stick around for the next installment. 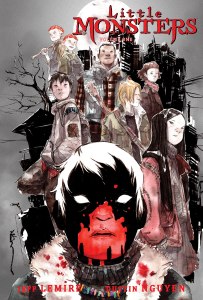 After the dystopian science fiction (with magic) of Descender and Ascender, co-creators Jeff Lemire and Dustin Nguyen return with a different flavor of the same genre, this time with a hearty helping of horror in the mix. The little monsters of the title are a group of vampire children living in a deserted city. The exact year is never given, but one of the prequel scenes is titled “The Second Pandemic,” and is set in 2029. At one point the kids try to decide how long they have been waiting for their adult sires (who they refer to as “The Old Ones”) and decide it has been at least 100 years.

Throughout the story there are flashbacks showing the origin stories of the kids (i.e. when they were bitten and turned into vampires). I think the earliest is 1763, and the most recent is 2029. So, some of the kids have been together as a group for centuries. They are still kids, though, and their day-to-day lives (which take place entirely at night, so they can hide indoors during the daylight hours) find them playing various games, or scouring the city for supplies. They have been feeding on animals, but events happen that change that, probably forever.

A human adult comes into the city to explore and becomes trapped in one of the buildings frequented by the vampire children. One of them enters, smells the scent of human prey for the first time (the kids had been told that there were no surviving humans), and immediately attacks. The taste of human blood is intoxicating. Most of the other children come back to the building to taste some, which leads them to seek out the human encampment where their prey had come from. The resulting attack is nearly a bloodbath, but one vampire is killed as well. This first arc ends with one of the humans promising vengeance, and a group of children threatening two of their own who have decided to shelter a human child. More than enough conflict to fuel another arc.

As in the previous series, Nguyen’s artwork has a hand-painted look. It is largely black and white (which suits the subject matter), but he employs splashes of color as accents. Red is a particular favorite, of course.

Freelance Journalist & Musician; Senior Contributor, All About Jazz.com; writing on comics at mrvertigocomics.com & No Flying, No Tights.com
View all posts by marksullivan5 →
This entry was posted in Image Comics and tagged Brian K. Vaughan, Dustin Nguyen, Fiona Staples, Jeff Lemire. Bookmark the permalink.