A new series co-created by writer Jeff Lemire (Sweet Tooth, Descender) and artist Phil Hester (Swamp Thing, Green Arrow) is bound to be worth a look. It begins with eight year old Meg gradually transforming into a tree, a bizarre occurrence that her whole family understandably finds difficult to believe. On the way to the hospital they are attacked by what looks like a strange cult: their estranged grandfather steps in to save them.

Things only get stranger from there. The family story was that their father abandoned them. But grandfather was there to witness his transformation into a tree, and tried to protect him from the group known as the Arborists. He takes them to a doctor in New York’s Chinatown, attempting to help, but accidentally attracts an Arborist unit. His attempt to protect them fails, but the family escapes with Meg. She has been in some sort of mystical contact with her father in a transcendent tree (a bit reminiscent of the Green in Swamp Thing).

So in only four issues the story is rich with possibilities. There is a realm of people who have turned into trees; their human protectors; and the Arborists, who are trying to stop the transformation (for reasons unknown, for now). More questions than answers, by far. Hester and the rest of the art team provide a distinctive look: a bit cartoony, but bold and dynamic. I look forward to seeing where it goes. 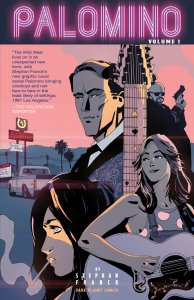 Los Angeles is not usually thought of as a country music town. But in the 1980s there were lots of country bars, and the main venue was The Palomino Club in North Hollywood. Regular visitors included performers like Merle Haggard, Willie Nelson, Waylon Jennings, Mary Stuart, Trisha Yearwood, James Burton and Carl Perkins (all of them sat in with the band), actors and stuntmen. Creator Stephan Franck interviews several members of the house band in a backup feature called “Working Musicians.” Palomino is fiction, but the atmosphere of that real place is like a character in the cast.

The protagonist is Eddie, an ex-cop turned professional musician (but he still dabbles as a private investigator). He and his daughter Lisette are trying to hold it together after the death of his wife: it was his obsession with solving her murder that cost him his career as a detective. When the wife of a famous TV actor is murdered, he comes to the club to implore Eddie to find the murderer, convinced that the authorities will try to pin it on him. Or maybe not: members of his entourage return at closing time to muscle him into leaving the investigation alone. But he does not respond well to threats, and drives off apparently committed to the case.

So the first installment of the series is mostly setup, but it’s a rich, atmospheric setup indeed. Franck’s previous series Silver was peopled by characters with distinctive designs and personalities, and this one continues that tradition. It’s a more realistic setting, though, and is presented in color instead of black and white. The ecstatic release of the music performance scenes contrasts vividly with the dark violence of the noir scenes. There are potential connections to explore, especially between Eddie’s wife’s murder and the new one.

This new series was launched via Kickstarter, as several previous projects had been. Hopefully it will attract an audience beyond his current fan base. It is a compelling story, one which should be especially attractive to fans of both comics and music, as well as crime noir.

At its heart this is a modern haunted house story. But its protagonist is an American Muslim woman named Aisha, and she and her multi-racial neighbors face racism and racial fear along with the supernatural entities that inhabit their apartment house. It’s a special place, and not in a good way: it is the site of a mass murder.  The back story of that is a central part of the narrative. It is revealed bit by bit, finally figuring strongly in the climax.

The supernatural entities reveal themselves to the residents one at a time, so it takes a long time for them to agree on the problem (they all think they’re seeing things). And in the meantime bad things start happening, like Aisha’s daughter and mother-in-law falling down a flight of stairs to their deaths. Caused by a ghost, but it looks like Aisha was responsible. In the end her friend Medina confronts the house, leaving her alone but free. Medina had hoped to render the place uninhabitable–thus leaving the spirits powerless–but the final scenes leave that in question.

This is a very effective horror story. That the political/social justice theme actually manages to contribute to the horror is truly remarkable: didacticism tends to be the death of story telling, in any medium. Pichetshote (mainly known as a Vertigo Comics editor) totally pulls it off here, lending an atmosphere of contemporary reality. Yet there is no sense of it being “pulled from the headlines,” just a bit of real horror in the mix along with the supernatural. Campbell and Villarrubia contribute visual art that is generally realistic (doing an especially good job with the design of an unusually diverse group of characters), but employs imaginative surreal images when the ghosts are present. In a touching scene at the end Aisha converses with a cartoon version of Medina based on a childhood drawing of the two friends. An excellent miniseries which I overlooked when it came out, but am delighted to have caught up with now.