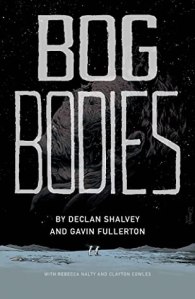 Irish comics creator Declan Shalvey is probably best known as an artist, having illustrated the Marvel titles Moon Knight, Thunderbolts and Deadpool, as well as the Image Comics series Injection with writer Warren Ellis. This is a gangster story set in Ireland, like his previous graphic novel Savage Town (Image Comics, 2017) with artist Philip Barrett. That story was about a minor gangster making a play to enlarge his sphere of influence; this one has a much narrower focus.

Killian (the young gangster protagonist) has made a mistake, and is being taken for a ride up in the mountains near Dublin to the bogs, a favorite place to dump bodies. He thinks he’s going to be doing the burying, but when he opens up the trunk the older gangster inside starts to shoot him. By some miracle he shuts the trunk in time, then takes off running. From this unlikely beginning (unlikely as in, probably wouldn’t happen in real life) the real story begins.

He encounters a young woman in the woods (who can’t remember how she got there), and after another unlikely escape they wind up at the cottage of adult gangster number two (the boy’s mentor). Before long he comes there too, and the final showdown is at hand. The conclusion is inevitable. But before that happens the story takes an interesting supernatural turn, as the bog bodies of the title appear to have risen from the graveyard out back. It’s very subtle, just in the background of the crime story. But it makes the deaths feel less permanent. The young mystery woman takes her place back in the graveyard as the story ends. The art team of Fullerton and Nalty deliver expressive, atmospheric visuals–tricky to do in a story set entirely at night, and most of it in the country, to boot.

The first of horror writer Joe Hill’s Hill House Comics line for DC Comics, this collects the seven issue miniseries published 2019 – 2020. The setting is a vacation spot called Brody Island, where June Branch is visiting her boyfriend Liam for the last weekend of summer. The festivities are interrupted by a group of convicts who escape from a work gang. When they break into the house June and Liam are watching, she grabs an ancient Viking battle axe to defend herself (not as strange as it sounds: the police chief who owns the house collects Viking artifacts). Next thing she knows, she beheads one of them: then the strangeness really begins, because the head keeps right on talking to her.

What happens next is telegraphed by the title. She keeps collecting heads, stashing them in a basket she carries with her. And in the process she learns more and more about what is happening on the island. Turns out the prisoner escape was just a ruse to cover up other crimes, and Liam and most of the police force seem to be involved. So June is not sure who to trust, plus there is a massive storm hitting the island, which has already cut it off from the mainland. It’s a bit of a classic EC horror comics ending, with June escaping the island in the company of the one person she can trust (the FBI informant everyone was so afraid of, and never suspected). She dumps the heads and the axe into the ocean, and rides off.

It’s a classic horror comic in that evil doers get their comeuppance at the hands of an innocent caught up in events: but the innocent apparently gets off with no consequences for her actions. Leomacs (seen before on Lucifer) has a classic visual style to go with it. Lots of broad facial expressions and action (reminds me a bit of Mad magazine), and he makes frequent use of the device of depicting action in a single panel (e.g. showing a character walking down a path by employing multiple character images). Kind of light-hearted fun, despite all the violence. The collection has some interesting extras: alternate covers and interviews with Hill and Leomacs, including character studies and other sketches.

I’m not usually a great fan of adaptations of novels, in movie or graphic form. Too often essential aspects of the original are lost: not just plot simplification, but also characterization. It is rare for an adaptation to retain the feel of the original. But I kept hearing good things about this one, so I gave it a shot.

The first thing you notice is the presence of Kurt Vonnegut’s authorial voice. Eisner winning writer Ryan North (Dinosaur Comics, Adventure Time, The Unbeatable Squirrel Girl) certainly understands Vonnegut’s dark humor, and he also draws liberally from the text of the novel. Spanish artist Albert Monteys (Universe!) provides mostly realistic illustrations, with a cartoon style that is especially effective with facial expressions. It is equally suited to comedy and tragedy (although black comedy is never far away). There are several pulp era comics in the story, which he emulates beautifully. That is clearly one part of the story for which comics are ideally suited.

Of course the story is a modern classic, so it’s not surprising so much obvious care was taken in the adaptation. The main formal change was eliminating the chapter numbering of the novel: the narrative covers the same territory, it just moves backwards and forwards in time without announcing the breaks. The visual depiction actually enhances the non-linear storytelling, demonstrating the fact that “Billy Pilgrim has come unstuck in time.” This is not just a great adaptation: it’s a great read, which I think could win over readers completely unfamiliar with the novel.