The previous volume ended with Andy regaining consciousness in the harbor. Out of the frying pan and into the fire: after a magical Healer fixes him, he is put on a prison ship bound for the Vamp Camps. Meanwhile, Telsa, Helda and Mila are on the water, and Mother (the magical leader of the ruling class) is hot on their heels. She is convinced that the appearance of the pet-bot Bandit means that Andy and Mila are important. At the camps Andy reconnects with Mila’s mother Effie and manages to get through to her in her vampire state. Significant flashbacks include events during the second Descender attack (nice to see Quon again), Telsa’s early adventures with Helda, and Mother’s back story with the Mothers (the eternal witch’s coven) and how she seized power. And the final big reveal: Driller is back. The story jumps around a lot, but it goes to unexpected places which promise some interesting events in the next installment. 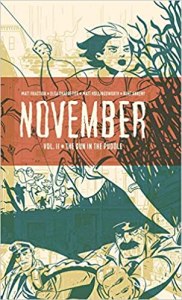 This installment opens and closes with scenes from new character Emma-Rose’s childhood. She dreams of freedom (symbolized by kite flying), which is ironic, since she is a bound captive in a car trunk as the present story begins. Police dispatcher Kowalski can’t let go of anomalies she sees in the dispatch record. Beginning to put things together, she calls a crooked cop named Ward and says she wants in. Meanwhile, another crooked detective named Mann is on the run from the two uniformed police officers who had Emma-Rose in their trunk. A criminal conspiracy appears to be falling apart. Emma-Rose was deposited in the warehouse where Dee was already held captive. The flashback to Dee’s final minutes of freedom tie this story together with the first volume. As she is taken captive her gun falls off the building’s roof and into a puddle down on the street–and here we are. A rich, complicated crime noir, which is at its midpoint (there will be four total volumes, not the three that I first thought). Looking forward to more secrets, and answers.

The last installment was full of travels though worlds and times. This one picks up the action in two scenes. In the first, Angie and Father Fred confront the Bishop in big-city Gideon Falls, where the secrets of the Pentoculus Machine are revealed in all their mind-bending glory. Taking a leap of faith, they begin trying to find their way back to the Gideon Falls where they began. In the second, Norton and Clara are trapped in small-town Gideon Falls with a murderous psychopath–with the additional complication that the murderer jumps from body to body. Angie and Fred arrive at the Village at the Center–Angie meets a much older version of herself–just as it is finally about to fall. Entering the machine, they jump to the mall where Norton, Clara and the Ploughmen are confronting the Smiling Man. Catching him by surprise, they blow up the Black Barn with a huge explosive charge. Certainly not a conclusion, but it feels like the ending of the first act.

The second installment opens with a new crisis: former patients of Jedidiah’s plant organ replacement treatment have been converging on the town in the hundreds, drawn to the town as their cures have begun to mutate. Freetown residents call them “Transplants.” Newly elected Mayor Monica Thorne assures everyone the situation is under control. But mutated animals keep showing up, many of them in the wild far away from the Farm’s supposed total quarantine. Zeke is convinced that Jed has lost control. Thorne reveals herself as the Maker of the Transplants (but not publicly). Zeke joins the Farm as their Communications Consultant, and his wife accepts Thorne’s offer of a job on her new Special City Planning Committee. Still plenty of family conflict as well, so the story maintains its core strengths even as new possibilities are introduced.

Four standalone stories set in the Ice Cream Man universe which are remarkably diverse, even given the frequently experimental nature of the series. “Cape Fear” opens with a superhero parody cover from Confection Comics (after the famous Action Comics Superman debut issue). Told from the perspective of “peerless reporter Parker Paige” (continuing the Superman angle with a Lois Lane analog), everything changes when she accepts superhero Ice Cream Man’s invitation to come to his Isolation Palace. After recovering from the coma caused by the experience, an Epilog depicts an alternative version of the Batman’s origin story. “Watch As It All Recedes” shows a dying man as his memories disappear, one by one (with gremlins as the agents). “How To Be A True-Blue Apparition” is one of the strangest Ice Cream Man stories, a diagrammatic field guide to the art of being a ghost. At first it does the diagram thing so well that it does not even seem to be a story at all. Finally, “For Kids” is another parody, this time of respected children’s picture books. Even Dr. Seuss is fair game. While this collection does not advance the main story, it is a strong entry in the Ice Cream Man series.