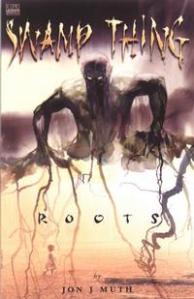 Next up are a couple of 1998 Vertigo Prestige format one-shots. Swamp Thing: Roots by Jon J. Muth is an American historical fiction story set in 1943. It has only a tangential connection to the character of Swamp Thing, but Muth does include a plant elemental aspect which brings several seemingly disparate story threads together. It’s difficult to see where he’s going with it at first, but it’s so beautifully painted that the art carries you along anyway. In the end the story is a showcase for Muth the artist rather than Muth the writer. 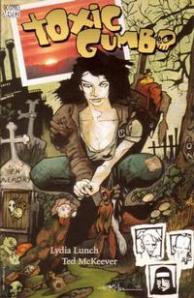 Toxic Gumbo by Lydia Lunch & Ted McKeever is the tale of a Cajun woman named Onesia born with a toxic physiology, which makes her immune to poisons. She becomes fascinated by poisons, experimenting on herself and using them on others. After escaping from an orphanage her story is a road trip through the Louisiana Bayou. She finds some companionship, but bad things happen to everyone who crosses her path. I suppose it’s meant to be a parable about the fate of innocence in our poisoned world, but in the end it reads more like a succession of bizarre random backwoods events. There’s no real ending, just Onesia back on the road, “ready for the next disaster.” 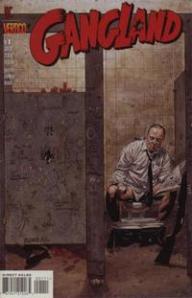 Gangland was another installment in the anthology series Vertigo was trying at this time. There were four issues, each containing 3 – 4 short stories. The creator bios appear in the beginning of each, written in the form of criminal records listing their alleged crimes. This was the most creative aspect of the series for me, along with the creative Mad Magazine-style foldout cover used for the first issue. Despite a stellar array of talent, none of the stories were standouts, with twist endings that simply were not surprising enough. Among the most successful entries were “Clean House” by Brian Azzarello & Tim Bradstreet (creator of that 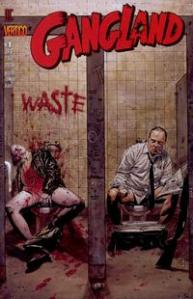 foldout cover, on rare interior illustration duties) about a changing of the guard in a Federal witness protection program; “Your Special Day” by Doselle Young & Frank Quitely, about a surprise hit at a Mafia wedding; “Big Shot” by Jamie Delano & Randy DuBurke, about CEO succession and the real power behind the throne; “Small Time” by Ed Brubaker & Eric Shanower, a surprisingly rich slice of life history of a small-time criminal; “Worldwide Gangster Robots” by Scott Cunningham & Danijel Zezelj, about a paranoid street person whose paranoia may be justified; and “The Big Snooze” by David Lloyd, about a mob dog turned police dog. Richard Bruning & Mark Chiarello, a couple of longtime DC staffers, are represented by “Electric China Death,” which has especially effective Chinatown visuals. There was a trade paperback collection. 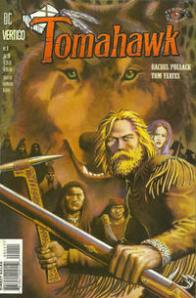 1998 also saw the last two installments (to date) of the “Vertigo Visions” series, one-shots which featured classic DC heroes done with a “Vertigo twist.” Tomahawk by Rachel Pollack & Tom Yeats is a tale about the American frontier, set in and around Boston in 1773. Thomas Hawke thinks the Native American population are savages, and he’s ambivalent about the talk of revolution, but takes part in the famous Tea Party protest anyway. Taken by a group of Wampanoag, Hawke learns their language and eventually comes to share their unity with nature. In the end his lover Emily finds him and convinces him to fight for the Revolution. So the “twist” in this case is that the central story is about a European coming to respect native culture (and incidentally accepting a woman as an equal partner as well). Heavy stuff for a frontier story, and the opposite of the kind of action normally expected in such a period tale. It would have benefited from more traditional action and less consciousness raising. 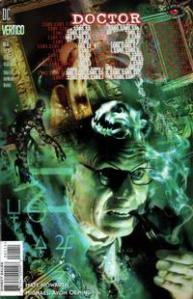 Doctor 13 by Matt Howarth (writer/inker) & Michael Avon Oeming (penciller) revisits Dr. Terence Thirteen, renowned debunker of the supernatural. The subtitle “Do AIs Dream of Electric Sheep?” points to the focus of the story (as well as alluding to the Philip K. Dick story that was the basis of the film Blade Runner). At the beginning Thirteen is shown defending his “skeptical rationalism” to a marriage counselor, and we see him in decline, separated from his wife. But as he tangles with a former partner who now hosts a reality TV show, it becomes apparent that the entire story may be taking place in a simulated virtual reality AI environment. It’s hard to ignore the similarities to films like “The Lawnmower Man” and “Tron:” virtual reality was a cultural theme that was in the air at the time. It’s a clever conceit for a comic, but it makes for an inconclusive ending. The “reality” of the story is not completely resolved.