Road to Perdition: The Graphic Novels 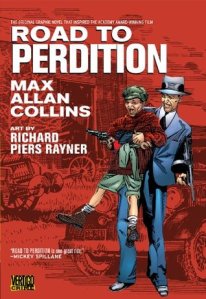 Road to Perdition had a slow birth and an unusual publishing history, as detailed in writer Max Allan Collins’ introduction to this edition.  The project was begun in 1994, but by the time of its 1998 completion its intended imprint–DC Comics’ Paradox Press–was about to be shut down. So instead of being serialized first, it was published all at once as a graphic novel. It was well received, but may have disappeared from sight if not for the 2002 motion picture adaptation. That event precipitated a Vertigo Crime reprint (an appropriate home for it), as well as two prose novels and two graphic novel sequels. I read it in the original edition, but had completely missed the sequels. So I chose to re-read it and then go on to the other graphic novels.

It seems unlikely that anyone reading this is unaware of the basics of the story, but here goes. Michael O’Sullivan was the trusted enforcer for a Midwestern Irish mob family until his eldest son tagged along and witnessed  a hit. His boss John Looney (a name so on the nose it is hard to believe that it is a historical fact, but it is) betrayed him and tried to get another crime boss to kill him (presumably there were plans for the son as well). But Looney’s unstable son Connor went to the O’Sullivan home on his own initiative, succeeding only in murdering O’Sullivan’s wife and youngest son. The absent targets arrive shortly thereafter, which sets them on a path of vengeance (with the ultimate destination a relative’s farm in a town called Perdition, where hopefully the boy can be raised in safety).

O’Sullivan’s visit to the Looney mansion results in a high body count–he is not known as the Angel of Death for nothing–but neither Looney nor his son are there. So the pair hits the road. O’Sullivan reaches out to the gangster Al Capone and his lieutenant Frank Nitti as well as Federal agent Eliot Ness, all in an effort to get to Connor (who is being hidden by the Capone organization, in cooperation with Looney). These historical figures add to the true crime aspect of the story: a lot of its narrative power comes from its basis in reality. The Angel applies pressure by getting old man Looney arrested, as well as a series of bank robberies in small towns that the mob has been using to launder their money.

It is a remarkable story, full of twists and turns (not to mention all of the elaborate gun fights). The realistic line art of Richard Piers Rayner gives the whole thing the gravity of a woodcut print.

The numbering makes this look like a sequel, but in fact these stories are set in the same time frame as the original graphic novel. As the subtitle implies, they fill in more details of the epic father and son road trip. Collins had always intended the saga to be longer and more open-ended than its first appearance, which had come to a rushed conclusion.

“Chapter One: Oasis” begins with a brief recapitulation of the main events in the first volume. Then it introduces two new characters, who will figure in all of the chapters here: the Two Jacks, the most feared bounty hunters of Depression-era America. Michael Jr. comes down with scarlet fever, which sends father and son to the O’Daly farm. Katie was O’Sullivan’s wife’s best friend, and the two of them had an affair before the marriage.

“Chapter Two: Sanctuary” introduces the gambler Queenie McQueen, and finds the pair taking refuge in a church. When the Two Jacks track them down, the situation looks dire–until an escaped convict and his gang show up to take revenge on the bounty hunters. O’Sullivan and one of the Jacks have a prior history, which serves as a foundation for their alliance. Their collaboration saves the Jacks, taking them off the board.

“Chapter Three: Detour” shifts the focus back to the O’Dalys, as Connor Looney kidnaps Katie to set a trap. O’Sullivan rescues her, against all odds. And he chooses to do that, while allowing Connor to escape. A vote for life, which shows his son that he is not strictly about vengeance.

Original artist Richard Piers Rayner was not able to do the art for these stories, but the illustrator’s role was covered by able replacements. Veteran comics artist José Luis García-López penciled the first and third chapters, while Steve Lieber penciled and inked the second chapter, and inked the third.

Just to keep the titles confusing, this graphic novel is not a sequel to either of the first two: it follows the prose novels Road to Purgatory (2004) and Road to Paradise (2005). Set in America in the early 1970s, it focuses on a third-generation hero, Michael Satariano, Jr., a Vietnam vet recently returned to the States. He doesn’t know that his father’s real name was Michael O’Sullivan, and is unaware of the conflict between his dad, his grandfather and John Looney (the Irish criminal godfather of Rock Island, Illinois). Initially the reader does not know these facts, either, which makes the story a bit confusing at first (although I had faith that things would become clear before long, which worked out).

But when he’s recruited by rogue C.I.A. agents as a hit man, he sees an opportunity to avenge the deaths of his father, brother and sister. Since that information came from his handlers he eventually realizes that it is suspect, but not before a series of assassinations and an especially tricky undercover job as a mob enforcer (echoes of his grandfather, for sure). His refusal to make the final hit puts a target on his back, along with his father (who has become a parish priest, of all things–an echo of elder O’Sullivan’s fervent Catholic faith) and sister, who are alive after all. Together they find a way to extricate themselves from the rogue C.I.A. group, and the conclusion is full of possibility for all of them.

This is another exciting installment of the series, with some additional political history about conspiracies between the mob and the C.I.A. worked in for an added dimension. Longtime collaborator, artist Terry Beatty (who co-created and illustrated Collins’  private detective comics series Ms. Tree for many years, among other projects) took over the art duties. He is an effective story teller, although these pages do not have the lush visual appeal of the earlier artists in the series.