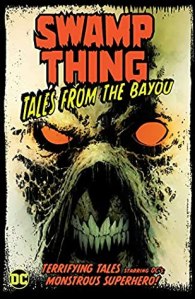 This collection compiles stories from several Swamp Thing Specials, told by a large, distinguished cast of creators. But the core of it is made up of stories written by Tim Seeley for Swamp Thing Giant (a series sold in Walmart stores that also included reprints of other modern stories set in the supernatural area of the DC Universe). In “Desert of Ash” (with artist Mike Perkins) the Swamp Thing (along with his witch companion Briar Woodrue, who features in all of these stories as well as some earlier in the collection) faces a fire elemental. Even the elemental forces of fire fear a breach in everything, the nothing represented by a being called The Barren–and Briar has positioned Swampy as “Lord Never-Barren.” “Bog of Blood” (with artist Joëlle Jones and and colorist Trish Mulvihill) is a two-part story that begins with a retelling of the Swamp Thing origin, but moves into the elemental area of the Red.

“Dead Falls” (with artist Steve Pugh and colorist Trish Mulvihill) finds ST and Brian intervening in the infinite labyrinth being run by a person trying to avoid a scavenger demon hoping to enslave his soul. “The Observer Effect” is a three-part story which explains the creation of The Barren, as well as showing the fight waged against it by Swampy and Briar. The Barren sought to dominate all of the realms, but finally found himself opposed by Dr. Holland (aka the former human identity of the Swamp Thing). When all of the elemental realms ask Alec to be their champion, he begins battle as “Lord Never-Barren the All-Thing.” This is the latest big Swamp Thing conflict, which have somehow managed to continuously escalate. It’s hard to imagine  how it could get bigger next time, but experience says that it probably can. 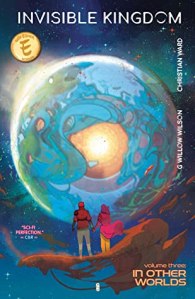 Wilson and Ward’s epic space opera ends with a literal bang in this final installment. Due to the pandemic the decision was made to publish it as a single graphic novel rather than collecting individual monthly issues. But it is organized in chapters that make it effectively issues #11-15; it seems likely that the final arc was already plotted out that way, perhaps even partially complete before the plan changed to publishing it all at once.

The narrative resumes with Grix, Vess and the rest of the crew of the Sundog safe at the Point of No Return on some kind of terraformed asteroid or moon which the Siblings of Rebirth call the Biosphere. The Siblings claim to be opposed to the corrupt Renunciation, and they want Vess to join the cause so they can attack it from within. They quickly convince Vess that they are on a mission from God, but Grix has doubts (complicated by the fact that Vess rejects her when she declares her love).

It all comes to a head on the planet Duni, home to both the headquarters of the megacorporation Lux (and its leader Director Prime) and the monastery of the Siblings of Severity (and its leader Mother Proxima) . Threatened by the Biosphere, Vess and Grix find themselves on the same side again. The big explosion at the climax plays right into Ward’s strengths, all bright psychedelic colors and motion. A satisfying conclusion, at least for me (I have seen other commentary that thought there were too many unresolved questions). 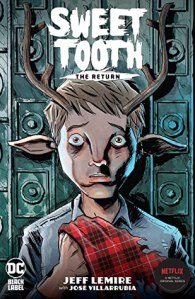 At the conclusion of the original Sweet Tooth series there was peace between normal humans and the hybrids, but the human population gradually died off, leaving the hybrids to live life on their own terms. The Netflix television adaptation–which has had a second season announced–offered Jeff Lemire the opportunity to revisit one of his favorite creations, accompanied by original colorist José Villarrubia. The sequel begins 300 years into the future, so it could not be a literal continuation of the original story. Instead it begins in an underground human settlement (so apparently they had not all died), where an authoritarian religious leader just called Father is working on a way to return to the surface and take the Earth back from the hybrids.

The star of the show is again Gus the deer boy, complete with antlers. But Gus is confused about his earlier life, and is beset with memories, especially of Jepperd (aka The Big Man), who he sees and communicates with (but he’s clearly not physically there, more like a vision or hallucination). Gus finally figures out how he wound up as the sole resident of his little community, and finds his way into a larger human village. He also meets a powerful elephant hybrid named Earl and allies himself with him and some sympathetic humans.

The human village is full of resentment at being treated like prisoners, and see Gus as a sign of redemption. They rally around Gus and Earl and head for the surface. This plays right into Father’s plan, as he thought he had weaponized Gus with a virus that will kill the other hybrids upon contact. But he has underestimated the power of empathy. His plan was foiled by Gus’ handlers. The final sequence recalls the “This is a story…” ending of the original. Gus and the villagers begin to go through the tunnel to the surface, hoping for a new beginning. Like the original series, the miniseries closes on an open-ended, optimistic note. Lemire found a creative way to revisit the Sweet Tooth world (even incorporating the human/hybrid conflict so central to the story) without resorting to rehashing or rebooting. It’s a worthy addition to the saga.