A Series of Beginnings: Stillwater Vol. 1 – Rage Rage; Something is Killing the Children Vol. 1; Killadelphia Vol. 1 – Sins of the Father 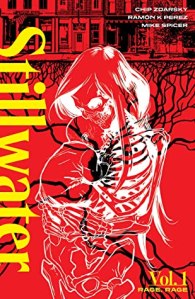 After getting fired from his job and beaten by a bouncer at a bar, Daniel is ready for a change of scene. Receiving a letter inviting him to the town of Stillwater for the reading of a relative’s will seems like a perfect opportunity for a road trip. He sets out with a friend, but odd things start happening on the trip. A gas station attendant in a nearby town has never heard of Stillwater; and as they get closer they do not see the town listed on any road signs. When they arrive in town they find no street signs, and no one seems to know the location of the law office.

When a child falls off of a nearby roof the townspeople seem oddly unconcerned, but the two outsiders rush him to the doctor. Things go downhill rapidly from there, and only the intersession of his mother prevents Daniel from being executed by the town strong man (technically a sheriff’s deputy). There is a reason for all of the secrecy: back in 1986 something happened to the town. Suddenly, and for no apparent reason, all of the residents were given eternal life (including the animals and plants). That makes Stillwater a kind of Eden, but the town leaders were concerned about what might happen if the outside world found out. So the decision was made to cut off all outside contact, which explains why it had looked invisible to the two visitors.

One bizarre effect is that everyone stays the same physical age they were in 1986, although with phenomenal healing powers. So the town children are all adults in children’s bodies, a fate that Daniel’s mother spared him by smuggling him out while still a young child. But he’s back now, and the decision is made to accept him as a resident since he was born there. He’s not keen on the idea, and it turns out that there is a group of townspeople who feel the same way. When they attempt to force the issue to a vote at a town meeting they are shut down, but respond by blowing up the town hall. In the mayhem Deputy Ted reveals the presence of his old military squad, armed and ready. Clearly there will be a new balance of power going forward.

Stillwater has an intriguing premise, and this first installment makes good on it. There is a large cast of interesting characters, and a unique setting (if a bit reminiscent of an old Twilight Zone episode). Pérez has a cartoony style that is frequently light on background details, but it works, and is especially effective in the action scenes. Looking forward to seeing how the story develops. 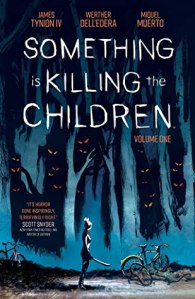 Children start disappearing in the sleepy town of Archer’s Peak, and the few who survive the encounter have impossible stories about horrifying creatures. They are monsters, of the classic type that hide under children’s beds, but they are definitely not imaginary. James is the sole survivor of a sleepover gone bad, but he was afraid to tell the police what he saw. When Erica Slaughter arrives in town, she convinces him to describe the monster that killed all of his friends, and assures him that she has come to kill the monster.

James asks if he can help, which inevitably winds up creating complications. Before long she has the older brother of another victim interested in her, as well as the local police. She also has a stuffed octopus that talks to her (only she can hear) and is apparently inhabited by some sort of spirit…and she works for a mysterious organization that she can contact psychically (although they also bug her by constantly calling her on the phone). In the end she manages to kill the monster and save the people with her, plus one child who was a captive. In the process we learn that the main reason adults are ineffective against the monsters is that only children can see them (and usually forget about them when they reach adulthood, or write them off as imaginary). But the bad news is, not only was the monster much bigger than expected, but it was a mother–and her children are on the loose.

In many ways this is an old-school monster story, albeit with some new occult twists. Dell’Edera’s art is simple but expressive; it has a distinct Young Adult look. It is especially effective in the action scenes, and Erica’s character design is both creepy and distinctive. Although I think it’s aimed at a younger audience than me, I plan to see where the story goes. Volume 2 is already out, and Volume 3 will be out soon.

Killadelphia is a vampire story with a unique hook. It begins when Baltimore cop Jimmy Sangster returns to his Philadelphia roots to bury his murdered father, a revered police detective. His hometown has become a hotbed of poverty and corruption, and something about his father’s death doesn’t feel right. Reading his father’s diary reveals the existence of something unimaginable: vampires. Jimmy visits the scene of his father’s death and finds a nest of vampires, but the indisputable proof comes when he exhumes his dad’s undead corpse. (Dad’s comment is, “What took you so long, boy?”)

But we haven’t gotten to the hook yet: the vampires are led by former U.S. President John Adams, who contracted the condition on a trip to the Caribbean (along with his wife Abigail) after he had retired from political life. But he never stopped thinking about politics, and is building a vampire army–which he intends to lead to take over the country, starting with Philadelphia.  This is the big secret Sangster senior uncovered before his “death,” and stopping Adams becomes the mission for him and his son, along with a medical examiner who has also reluctantly come to believe in the existence of vampires.

As a newly created vampire Sangster is still learning about how to use his powers. Fortunately the group finds an ally in the form of a disillusioned Adams lieutenant named Tevin. And as it happens, Tevin has also figured out the meaning of a mysterious magic book. The big conclusion only sets the stage for the next chapter. It’s one worth waiting for, both for Barnes’ story and the impressionistic art of Alexander and Nct.