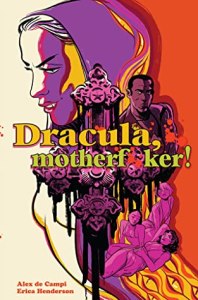 Campi and Henderson begin their idiosyncratic Dracula story in 1889 Vienna, as Dracula’s wives nail him to the bottom of his coffin. Jump to 1974 Los Angeles, as an aging starlet pops the top of an ornate coffin during a party. The resulting mass murder scene attracts the notice of crime photographer Quincy Harker (whose last name has a historical connection to the legendary vampire and his brides). Soon corpses start showing up with bite marks on their necks–but as usual the real problem is the ones who were bitten and turned. It’s a contest between the old wives and Dracula plus his new wives, which culminates in another party, this time a setup for the invitees. de Campi’s essay “On monsters” describes her unique approach to the myth: she thinks giving the vampire a fixed physical form does a disservice to the monster’s power (especially fixing it as a 19th century Gothic horror story). So Henderson mostly draws him as a formless horror, all eyes and fangs. The story takes place entirely at night, but Henderson finds ways to use lots of color–the traditional red of the darkroom being one example–in wild, unnatural ways.  A fun ride, and at 70 pages more of a graphic novella than a graphic novel. 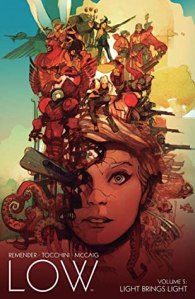 The previous collection came out in 2017: so long ago that I had completely forgotten that the series was not finished! But in fact there were a number of narrative threads left unresolved, as that arc was devoted almost entirely to one character (Tajo Caine) and her return to the dome city Salus. Stel Caine has been living a safe, privileged life on the surface with new mate Zem: but they are essentially prisoners. The Burnt Legion (an army of surface warriors) launch an attack on the underwater cities, arguing that they represent the true future of mankind. She is also opposed by her other daughter, the Helmswoman Della.

As usual Stel is possessed of almost superhuman optimism, and remains as sure of that as everyone else is of their darker, more pessimistic views of the future of mankind. But a violent clash is inevitable, and once this final arc gets going it is largely devoted to one battle after another (accompanied by philosophical arguments, each side absolutely convinced they are right). Salus is rising to the surface: fellow underwater city Voldin takes it as a betrayal which must be stopped; the Burnt Legion takes it as an opportunity to wipe out both remaining domed cities.

It’s a tale of desperate measures right up to the end of the battle. The ending (and the brief postlude that follows) bring Stel’s “light brings light” philosophy to its logical conclusion. Not the first time a hero has triumphed over impossible odds, but rarely has it been telegraphed so strongly. I’d say it did not require seven issues to tell, but I can hardly fault the storytellers for maintaining a consistent tone.

Another finale, this time to a series of graphic novellas rather than an ongoing series. When they are collected they will form a 320 page graphic novel. But it does seem that the periodical publication served a useful purpose in establishing the dramatic structure, with the first three quarters each focusing on one of the three women the story revolves around (and ending in a cliffhanger). The final installment finally brings all three women together.

Everything has come to a head. The two captives and the nosey police dispatcher are together in the evidence storage building where they had been held. They’re alone, but probably not for long: bad cops and the criminals they have been covering for are bound to converge there any minute. To survive the women must work together, which looks dicey at first. But in the end they all rise to the occasion, more or less. During the climax it is especially effective to see the same scene from different character’s perspectives.

Having become attached to these characters, it was nice to see three Postscripts showing how things turned out for them in the months after the big night. Only one of them could be described as a happy ending, but this is crime noir, after all. Satisfying to see more realistic fates for the other two. Anyone who has waited for the series to be collected is in for a good read. 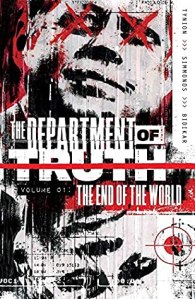 FBI agent Cole Turner is a longtime student of conspiracy theories, but he is in for the shock of his life when insiders give him a look at what is really happening. Apparently sufficient collective belief can turn fringe theories into reality: e.g. if enough people believe the Flat Earth Theory they can actually alter the physical world. Turner is drafted into the Department of Truth, a top-secret branch of the U.S. government that has been in charge of making sure that dangerous conspiracies don’t gain a foothold in the real world for decades. So in a sense Cole learns that every conspiracy theory he has ever heard is true, at least potentially.

The situation is further complicated by the competing organization Black Hat. They are spreading conspiracy proof in the world, perhaps in an effort to reveal the existence of the Department of Truth (their effectiveness depends upon their secrecy).  When the head of Black Hat contacts Cole he has a very different story: the Department represents the latest version of a historical conspiracy, the one responsible for the actual secret history of the world. According to this version of the story, they are not the good guys. And why have both groups tried to recruit Cole? So many questions.

This is the beginning of a fascinating trip down a rabbit hole, with surprising twists and turns guaranteed. Simmonds’ art is a powerful tool for creating a mysterious atmosphere, very reminiscent of the great Bill Sienkiewicz. Letterer Bidikar definitely earns his cover credit, as the lettering makes an expressive contribution to the visuals.