The second installment of this series really makes the first look like setup. Meg’s transformation moves so rapidly that she begins to grow roots. So the only thing to do is take her into the forest to complete her full transformation into a tree. The narrative shifts to five years later: the world has ended, and Meg’s older brother Josh Hayes (now mature and hardened) is one of the last people alive. He is out to save the world. We also learn more about Grandpa Judd and his whole history with the Arborists. And in the final pages Meg’s tree begins to seed, with immediate–and shocking, maybe horrifying–effects on the people in the area. The human transformation into trees has begun.

If the original series hadn’t been titled “Nailbiter” it would have made more sense to call this “Buckaroo Returns.” Because while the Nailbiter does indeed return, the main action involves his wife and daughter–along with the apparent reincarnation of the infamous Buckaroo Butchers (all of them). Once these copycats begin imitating the modus operandi of the serial killers they idolize Agent Finch is called onto the case in short order. The murders are taking place in Portland, Oregon, and the previous characters are introduced one by one, often in surprising ways. But the big surprise is the revelation that the serial murder spree is part of a game called the Buckaroo Brawl: which was created by the Nailbiter and his wife. So it’s back to Buckaroo, Oregon for the next collection. Murderous action is guaranteed. At the end of the previous collection there was no indication that a sequel was planned, but this new installment is definitely a return to form by the entire creative team. 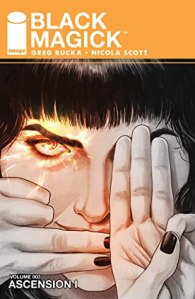 Despite a three-year publication gap the story picks right up where it left off. Rowan is still out of sorts after her falling out with her detective partner, and her friend and fellow witch Alexandra is having a dangerous affair with a member of the witch-hunting group AIRA. A rogue AIRA member comes after Alexandra. And a demon keeps turning up, trying to recruit Rowan (his dialog is printed in an annoying pale orange font which is difficult to read). His final act in this arc finds him threatening the lives of both Alexandra and Rowan’s new love interest (her new partner Nichole), forcing her to fully embrace her powers. It makes for a dramatic final scene–especially after a lot of small character building preceding it–which is guaranteed to make a huge impact on the next installment.

After reading the first two TPB collections of this series it completely dropped off my radar, so I was happy to be able to get the second half of it in one edition. It begins at the series’ halfway point, so there is a lot going on. The deep-sea base is on the brink of destruction, but Mia is still actively working on solving her father’s murder. The base staff has split into two groups, so there is a lot of shifting between them, as well as many flashbacks that shed light on their relationships. It is through these flashbacks that Mia finally figures out how and why her father died; by the time she gets there it is a bit of an anticlimax, but it is a convincing solution. After a very long sequence Mia makes it to dry land. She still has a decision to make about what to do with the cure to the epidemic that the team had developed. There is a lovely final memory sequence of Mia’s late mother: her advice to always err on the side of compassion will guide Mia’s decision. No need to spell it out in the narrative.

So the conclusion is satisfying on many levels. It does feel like it took Kindt an awfully long time getting there, though. I can imagine the story being shorter by at least a quarter. He does use the extra pages to include lots of interesting world-building artwork: undersea creature designs, equipment diagrams, even a few faux advertisements for undersea diving gear.