A central thread running through the final arc in this chapter of The Dreaming is Matthew the raven’s sense that “Something is sick. Something is dying.” Abel shares his experience of seeing the Dark Moth unmake things, and replaces Mathew’s eyes with his. So now the raven is disconnected from Wan, and can seek out the maker of the machine code that has taken over The Dreaming.

Meanwhile Dora is on a quest to uncover her true nature. Both quests lead to the same place: a technology kingpin named Hyperion Keter. Keter had created the A.I. hoping to alter humanity for the better by taking over the dreamscape, eliminating irrational ideas like superstition, myth and religion. A visit from Daniel convinced him that he should abort the project, but he is on his deathbed, and it is too late.

It takes rather a long time getting there, but in the end resolution comes in the form of dream vortex Rose Walker and Dream’s clever plan of hiding his totems of power in case he became imprisoned again (as he had been at the beginning of the original Sandman series). The cynic in me wants to label the whole thing a big magical reset–but there is something glorious about the way it completes the story, answers all of the questions, and sets the stage for new stories of The Dreaming.

The Wild Hunt is a common element in the folklore of many countries, often led by the Norse god Odin, as it is here. The object of the hunt is always a supernatural being, in this case a deity (currently in human form) called the Hunted God. In ages past Lucifer took over leadership of the hunt. Now he would prefer to have nothing to do with it, but a prophecy says that he must “build a home to house the hunted heart” to stop the hunt–or he will be forced to return to Hell to rule.

The first problem is locating the god. Being human, neither Lucifer nor the Hunt can get a fix immediately. Lucifer calls on two familiar Vertigo characters for help: John Constantine (who has not previously had a role in Lucifer’s stories, other than a cameo in the original series) and Mazikeen (his former lover and partner, but estranged from him in this series).

The hunt travels through several worlds. Mazikeen and her companion Ruskin return to his former home, the necropolis city of Litharge (a callback to The Sandman and a Sandman Presents miniseries), where Lucifer confronts most of the members of the hunt. But Odin has found the Hunted God, and Lucifer arrives, seemingly too late to prevent the death of the god. In typical Lucifer fashion he manages to fulfil the letter of the prophecy, simultaneously ending the Hunt while remaining free of Hell.

The Corinthian makes his way to the House of Watchers, as promised in the previous collection. The Endless named Despair created it as twin to the House of Whispers, and placed the soul of fable teller Aesop in charge. After being forgotten for ages the spider god Ananse discovered it and took it to his lair. Aesop had become bored in Despair’s absence, so the Corinthian’s arrival presents an opportunity for freedom from his pledge. But he was not marked with Despair’s sigil, so the house immediately takes his essence apart, distributing it among its many mirrors.

Erzulie has lost her houseboat to her remaining two husbands, and is unable to answer the calls of her faithful as promptly as usual. She begins arriving late, finding harmful answers to their prayers and bits of shattered mirrors. When she attends a divorce mediation helmed by immortal voodoo practitioner Papa Midnite (a staple in Hellblazer stories; John Constantine also makes a brief appearance) she realizes that she must find the House of Watchers.

Her approach is to gather all of the mirror pieces, reassemble The Corinthian, and ask him how to find the House. Midnite and Aesop travel to the Land of the Dead (there’s even a name-check on the Haitian rum Rhum Barbancourt, which I appreciated), where they are unexpectedly joined by Erzulie and the House of Whispers houseboat. A new character named Poquita figures prominently in the conclusion as well, and the grand finale includes the improbable resurrection of Agwe. A happy ending to conclude the series. I never did fully connect to it, although this final arc did an especially good job tying itself to the Sandman mythos. 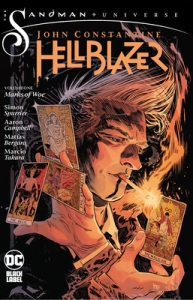 John Constantine’s Black Label debut is largely a return to his Vertigo days. He’s back in London, and still willing to sacrifice his friends to achieve his goals (but he is also doing more overt magic than in the classic stories, an aspect of the recent reboots that has persisted). The standalone that reintroduces the character is set in an apocalyptical future, the final magical war against Timothy Hunter that has been foretold for so long. John comes to in the psychiatric hospital Ravenscar–so there’s some question about the reality of what he has experienced–but at the same time we see a future Constantine who is like a ghostly presence.

A Books of Magic issue shows Constantine trying to kill Hunter, because he thinks the young mage is too dangerous to remain alive. But the kid surprises his mentor by cheating on the test, displaying unexpected ingenuity.

The new Hellblazer series finds John recruited by a London gangster for what looks like an exorcism. Turns out to be much more complicated than that, although in the process he acquires a new driver to replace Chas. Aaron Campbell illustrates this arc in classic Hellblazer style, an impressionistic visual aided by Jordie Bellaire’s colors. In the second arc “Scrubbing Up” Constantine has to put up with a would-be protégé (with an appearance by mage Clarice Sackville, and the discovery that Map has died);  Matías Bergara contributes a more cartoonish style than usual, but it works for the story.

The third collection opens with the same issue that appeared in the first John Constantine, Hellblazer collection. It makes sense for it to be in both volumes, since it involves both characters equally. But having passed the test Tim is back in school, with all of its complications. His former allies among his classmates don’t trust him; his mentor Rose is concerned that he is becoming too free with his magic, attracting the attention of both the Cold Flame and a The Other Side, a police group that investigates unusual events; and things become even more muddled when an older doppelganger of Tim appears.

He’s out to convince Tim that all of his advisers are wrong: he should learn how to use his magic, and have some fun with it. The double inserts himself into Tim’s dreams, trapping him in a desolate winter landscape. He is desperate to possess a powerful book of magic (a book of needs), but for him to take possession Tim must give it to him freely.

After finding his way out of that problem, the final story arc “Dwelling In Possibility” finds Tim travelling to The Dreaming (which appears to be back to the status quo, with no indication of all the prior chaos with the A.I. and Daniel’s absence other than an oblique reference). He returns home to be arrested for murder by the Dead Boy Detectives–in the meantime his school friends meet Destiny of the Endless in his Garden of the Forking Ways. These two events wind up entwined, with a surprising result: Tim Hunter is not inexorably bound to an evil path. This is probably the most consequential event in all of the Sandman Universe stories. While it does not negate a possible apocalyptic future, it does definitively declare that a better future is possible. Hunter still has choices.

All of these stories were created at a time of upheaval at DC Comics, including the end of the Vertigo imprint and the beginning of the DC Black Label mature readers imprint. There must have been some confusion about where things were going, as can be seen by one of these titles coming out under the Black Label imprint. Yet both Books of Magic here and the recent Lucifer Vol. 4 (which will be in the next installment) have the DC Vertigo emblem on the cover, despite being published later. Many of this group of collections had an unusually high page count, as well. The Dreaming collected eight monthly issues; House of Whispers had ten; Hellblazer included eight issues (including a one-shot and a Books of Magic issue); and Books of Magic was also ten issues long. Hard to believe that they were originally planned to be so long (5 – 6 issues is average for collections like these). Nice to see unrushed conclusions, though, and to see the Sandman Universe line continue despite the uncertainty.