Posted on September 1, 2020 by marksullivan5 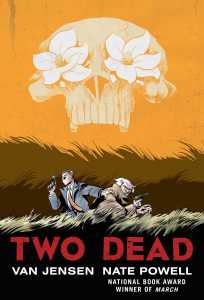 Set in Little Rock, Arkansas just after the end of World War II, Two Dead weaves a complex fabric made up of post-traumatic stress, racial conflict, mob violence, political corruption, and regret. The story is told from multiple perspectives: a newly minted police lieutenant haunted by his recent war service; a seasoned, gun happy detective haunted by the fate of his first partner; a seemingly untouchable gangster who runs the town; and two African-American brothers, one a criminal, the other a proud war veteran leading a local militia trying to protect the citizens on their side of town.

Gideon Kemp begins his first day on the police force with a visit to the mayor, the man who hired him. Kemp has a lot of weight on his shoulders: as the mayor’s inside man he is charged with bringing the police force into the modern age; keeping tabs on loose cannon Chief Bailey; and helping the city with its mob problem. He quickly discovers what Bailey is like: hotheaded, impulsive, quick to shoot, and completely unconcerned with regulations. He likes to keep trophies of his kills (guns, bullets and the like), and so does mafia don Big Mike (teeth from his victims, specifically canines).

Right from the start the action is violent, and since it takes place in an illegal casino it draws in all of the central characters. The repercussions ripple through the rest of the story. It’s far from the last of the violence, which includes a big shootout on a bridge and mob hits. But the narrative still makes room for in-depth character development for all of the major characters. Their various histories are gradually revealed, shedding light on how their military careers formed them, and the way past decisions inform their current actions.

Chief Bailey’s story is only fully revealed towards the end, as well as the reason for Kemp’s decision to go into police work despite other excellent options (the law and the F.B.I.). Their final conflict feels inevitable, as they are both haunted by deaths early in their careers. I would say the title dead refer to both them and the deaths on their consciences.

Nate Powell’s art is loose and expressive, with fluid panel layouts–even the lettering (very much old school hand lettering) has a sometimes manic energy. The darkness of the story is matched by the frequently dark pages: lots of blacks and brown tones, occasionally to the point that the action is hard to follow. Ironically, the flashbacks feature white backgrounds and more regular panel layouts, making them a welcome visual break. The story was born during Van Jensen’s time as a crime reporter in Little Rock early in his career. He reported on these events, and thought about fictionalizing them ever since. Powell is a Little Rock native, so it was a natural partnership. It was a long process, but worth waiting for. 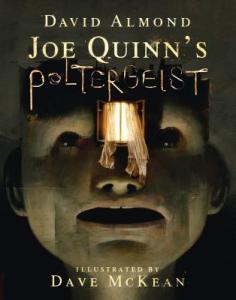 This is an illustrated David Almond short story rather than a true graphic novel. But it’s illustrated by Dave McKean, an artist whose multimedia work is never less than stunning. Joe Quinn tells everyone about the poltergeist in his house: a “playful ghost” responsible for things flying through the air, resulting in broken plates and windows. No one believes him, except his friend Davie. Davie has had his own supernatural experiences, along with the memory of his beloved sister and a feeling that ghosts might exist.

He asks his Catholic priest Father Kelly to witness. But Kelly has his own crisis of faith, which eventually results in his return to Ireland and his unfrockment. Davie increasingly comes to believe that he is the source of the poltergeist activity. In his absence Joe Quinn’s poltergeist disappears. “And there will be other occurrences, an immensity of them, and the world and all that’s in it will continue to hum and sing, to shake and shine, to hold us in its darkness and its light.”

It’s a haunting story–literally–which is not resolved. Almond’s story is given a rich visual presentation which amplifies it, a visual narrative deeper than the prose it is based upon. McKean fans should not miss it. 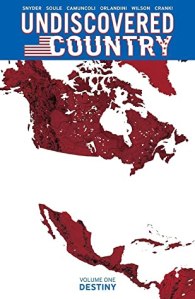 Undiscovered Country presents dystopia on a grand scale. Anticipating a global collapse, the United States of America walled itself off from the rest of the world. Over a century later, a mysterious summons from inside America calls a small expeditionary force to enter the country.  A cure for the current global pandemic–which threatens the very existence of the human race–is promised. The entire air space is a no-fly zone, but the helicopter passes safely through the electro-magnetic wall–only to be shot out of the sky by a missile.

It’s a bad start to the adventure, but things start to get worse almost immediately. And considerably stranger. There are a bunch of Mad Max-style vehicles and animals, and then most of the group is taken into an underground zone with the Silent Minority–silent, because they have to stay out of the Destiny Man’s notice; and minority, because there aren’t many left.  Sam Elgin (who is visually the image of the classic Uncle Sam) says he wants the group to save America.

As the group (which has been split up) continues coping with the new situation, there are a series of flashbacks showing how all of the team members were recruited.  The process reveals as many questions as answers: the various power centers in the new world all recruit different team members. Sandoval (the journalist on the team) did the research, and she could not see why any of the team members were chosen: in fact they seem like the worst possible choices.

Be that as it may, they have the Key, and pass the first door into the Spiral (the series of destinations that now define the American nation). The A.I. named Aurora (which may be the one who invited them) also lets Destiny Man in. So the scene is set for an epic journey, one which seems likely to get stranger and more dangerous as it goes. The story is a bizarre blend of apocalyptic imagery and conspiracy theories, with lots of wild action. The team is headed by two of contemporary comics’ best writers, but the artistic team really sells all of the wild ideas in the script. Looking forward to the next installment.