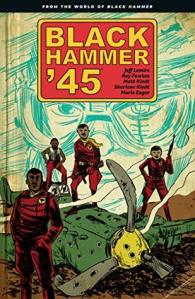 Yet another cool corner of the Black Hammer universe: the World War II era Black Hammer Squadron. Four ace pilots, led by Hammer Hawthorne–but they’re more than that. They are more like adventurers, just as likely to parachute down to the ground and continue the fight there. They do not have super powers, but are both preternaturally skilled and extraordinarily lucky. And they do interact with some of the Spiral City heroes: both Golden Gail and Abraham Slam make appearances (there were references to wartime experiences in the Black Hammer series).  In the final showdown with the Nazi ace the Ghost Hunter the mechanized Soviet Unit called the Red Tide is a factor (and another surreal element in an otherwise realistic war story). But in the end it is Hammer versus the Ghost, and we finally see the conclusion to the war memorial story that has threaded through the story: the past and the present come together. This is the first Black Hammer story that Jeff Lemire did not write, but the authorial voice feels authentic. Matt Kindt’s art is more of a disruption. Not that it doesn’t work for the story, just that it is so distinctive that the comic can’t help but feel a bit like a Kindt story. The collection concludes with several interesting sketchbook pages, showing the transition from pencils to inks to colors. 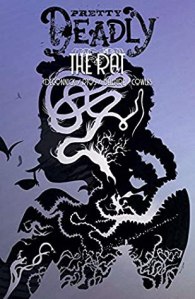 Vol. 1 of this series had an old West setting, and Vol. 2 had a wartime setting. The storytelling shifts to a detective noir format here, placed against a 1930s Hollywood backdrop (referred  to as Hollywoodland). If nothing else, it certainly establishes the series as unconstrained by genre. But the story proceeds directly from the previous collection. Clara is found dead, which inspires her uncle Frank Fields (the Conjure-Man) to seek answers: how did she die, and where is she now? Like the previous arcs the story is narrated to a butterfly by a skeleton rabbit, which by now seems perfectly natural, along with the various Reapers, Death, and the World Garden. The world building (which I found rather confusing in the first arc) pays off here with a fantastical backdrop to what is an old-fashioned missing person investigation in many ways. It takes Frank and his Reaper companion from Hollywood back lots to the supernatural realms of the Reapers. He gets his answers, along with an ending that is real if not entirely satisfying. Ríos outdoes herself with the beautiful, atmospheric art, which features very creative panel layouts. Bellaire’s coloring is pastel delicacy much of the time, but includes dramatic color changes to highlight scene changes or intense action. I look forward to seeing where the story goes next. 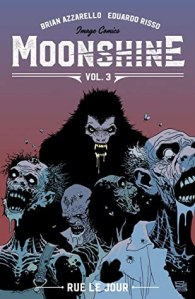 This series has been slow, but it continues to build. This installment begins with Lou Pirlo and his lover Delia in New Orleans, seeking a cure for his werewolf affliction from two witches that Delia calls “mother.’ They demand a high price, which Lou sets about earning through gambling. It’s a dangerous path for him, because it leads him back to drinking and other hazards of the night life. He meets Jean-Baptiste, a man presenting a harmless-looking front. But he’s a vodou priest who has a history with Delia. And a deal with the gangsters seeking Pirlo. Meanwhile, Tempest leaves the back woods, ahead of the gangster retribution that is sure to come. Lou’s ghosts are back, and Jean-Baptiste urges him to embrace his werewolf side. The climax brings the gangsters and New Orleans together, with Pirlo, Delia and the witches coming out on top. Plenty of set-up for the next installment. As always, Risso’s stylish, evocative art is almost reason enough to continue reading. 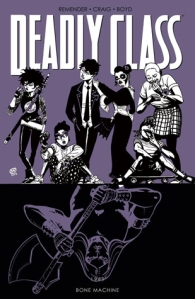 Picking right up where the previous volume ended: no sooner had Saya and Maria reunited then they had to fight off a ninja attack. Saya had been declared a “ghost” by Master Lin. She would have been killed on the spot, but Maria claims her as her pledge. It’s a somewhat hollow victory, though, as Saya finds herself treated as if she is invisible at the school. Helmut is out to avenge Petra’s death: she was the only love he had ever known. The quest takes him to the bizarre death cult to which her parents belong. Marcus is in full depressive mode, endlessly ruminating on how he got to where he is now and where he wants to go. His wordy, moping interior monologues quickly grew tedious for me. A party at a remote mountain cabin becomes a massive confluence, as Helmut’s revenge, Shabnam’s plan for control, and a crazed warrior band also seeking revenge for Petra converge. There’s a tremendous body count–including some major characters–and a changed status quo going forward.