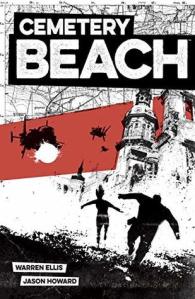 Warren Ellis suggested this miniseries as a break from Trees, the other series he co-created with artist Jason Howard. It certainly is quite a contrast: a nearly nonstop action story, much of the plot revolving around a single action. An advance scout from Earth named Mike Blackburn has been captured on a distant off-world colony. He escapes in the company of Grace Moody, a dissident and murderess. They have to cross most of the habitable part of the planet, from the capital Maincastle where they were being held to bleak Cemetery Beach, where Blackburn landed.

And the chase is on. It’s an epic chase–nearly seven issues’ worth–which happens on the ground, in underground tunnels, and in the air. Somehow it finds a way to escalate continually, resulting in ever-greater explosions and body counts. However unlikely the escape seems, Mike and Grace continue to wisecrack while performing nearly impossible feats to elude and confuse their pursuers. In the end Mike makes a surprising choice, and he and Grace go on their respective paths. It is a reasonably satisfying conclusion, which still leaves room for a future sequel.

This is Ellis in pop-comic mode, just having fun with a sci-fi/action genre story. Howard seems to relish the energy of the nearly non-stop action. 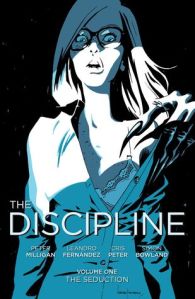 Here’s a twisted tale. In his Introduction Milligan acknowledges that the first thing readers notice is the sex. There is a lot–along with plenty of bloody violence–but it is far from being the main point. Sex (and sadomasochism) are just means to release occult energies. The real action is the ancient war between The Discipline and The Stalkers. After being seduced by a mysterious stranger, bored Manhattan housewife Melissa Peake finds herself drawn into the battle.

The farther she gets into it, the stranger it becomes. Both sides include bestial transformations, which don’t appear human at all. And both claim to be “the good guys.” The Discipline is run by the Ancient Council, and the “ancient” part is literal: Melissa first travels to ancient Rome to meet them. She turns out to be a pawn to both sides, because of a talent she possesses that is never really defined.

The story delves into the ancient world briefly, casting a new light on the relationship between Julius Caesar and Cleopatra. Melissa’s final acceptance of her role involves a confrontation with one those famous historical personages. Fernández’s vibrant, kinetic artwork sells most of this. His character designs are distinctive, with a range of realistic body types, both male and female. His dynamic action sequences suffer only from occasional visual confusion (hard to avoid when there are unique creatures involved). Plenty of room for a “further adventures” sequel (not to mention further historical tales about the war between the two factions), although there is no indication that one is planned. 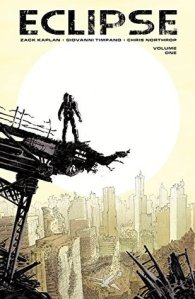 Writer Zack Kaplan makes his comics debut with this dystopian story. The setting looks contemporary. But ten years previously the world suffered a cataclysmic solar event, the Z4 Solar Flare. It killed billions of people–nearly everyone who was outdoors at the time–and rendered the surface of the planet uninhabitable during daylight hours. The sun is so intense it will melt your skin off. Naturally the societal changes are massive: society moved underground (exacerbating the distance between the haves and have-nots), and protective suits called “iceman suits” were developed to allow police and maintenance workers to move about on the surface during daylight.

It’s an interesting premise, but right from the beginning the focus shifts to a murder. It turns out there was a death threat (by someone quoting Bible verses), and solar engineer David “Bax” Baxter is called in to help protect the daughter of a solar industrialist who has also received a threat. Someone is killing people using sunlight. Bax must figure out who it is, why they are doing it, and (perhaps most importantly) how they are doing it. Apparently the killer is able to survive the sunlight, so the “how” could prove extremely valuable. The story has all the classic criminal noir elements, with the added twist that these crimes happen in the light instead of the dark.

An exciting start to the series, this first installment ends with both resolution and a cliffhanger, so it will be interesting to see where it goes next. Timpano (The Shadow, Lone Ranger) seems an odd match to the material, or maybe I just don’t like his art that much. He does come up with distinctive character designs, and is good at kinetic layouts in the action sequences. The collection concludes with a lot of process material: a discussion of the cover designs and page layouts; character designs and development; coloring process; lettering; a couple of faux official documents; and a cover gallery.