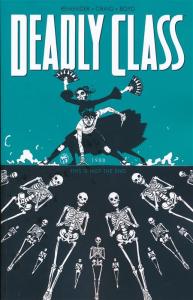 This collection opens with an issue devoted to Saya, last seen thrown off a rooftop and presumed dead. Turns out she survived, but the jury is out on whether that is a good thing. We finally get details about her twisted family history, and the reason her brother has been hunting her. She is in the care of her mother, who is not on her side. The scene shifts to Mexico in the next issue, which begins with Marcus and Maria enjoying themselves on the beach, thinking they have escaped the influence of the King’s Dominion school for assassins. Then we see Saya’s mom phoning Quan, who has been working for her and the family against Saya (there was a brief foreshadowing of this relationship in the last volume). The scene finally shifts back to King’s Dominion and the freshman class who were the main focus of the previous volume. There is considerable friction among Shabnam’s ruling council. Next thing we know, two groups of KD students are converging on Mexico–one by accident, the other sent to kill Marcus and Maria. As the last issue closes, Marcus has gotten the drop on Brandy and Victor. Lots of revelations here, as well as disparate story lines brought together. The collection also includes cover images, including several alternate covers.

The previous volume was devoted to the War for Phang. This one opens with Alanna seeking an abortion on an outpost planet called Pervious: she lost the child she was carrying during the escape in the previous issue, and the unborn fetus is now a threat to her life. But the unborn child is still having an impact on its mother, as she discovers she now has spellcasting powers, something normally only found in those with Wreath blood. The baby was half-Wreath, so…although the mechanism is unclear. She doesn’t have any control, which causes her to “forecast” a projection of their possible future son Kurti while the family is on their way to the Badlands to seek a back-alley abortion. Meanwhile Petrichor is visited by Badlands desperadoes, but is saved by Sir Robot. So many surprises. Two standalone issues catch us up with The Will (including Lying Cat) and Ghüs. And I can’t leave this without saying how much I love those multicolored zebras! 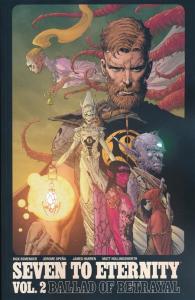 Remender and Opeñ’s dark high fantasy continues in this second installment. Adam Osidis and the Mosak are still traveling the blasted lands of Zhal to deliver the Mud King to the only force strong enough to undo his hold on his army of compromised slaves–they can’t just kill him, because that would kill everyone in his thrall. It’s a perilous route, and before this installment is over the group has been split in two, at least partly due to the mistake of taking the gag off of the Mud King. He is a malicious conniver who is capable of sowing dissension through words alone. I have never been a big fan of high fantasy, and the story is definitely losing me. The book is beautiful to look at, although some of the more magical action can be hard to follow. But the stilted dialog has become a chore for me, and the conflicted group dynamics are getting predictable. Will Adam take the Mud King’s offer and get his terminal medical condition healed? I may not stick around to find out.

Sakhmet is in hiding after her rampage in the previous collection, and a lot of the action initially revolves around finding her, and handling her when she is found. Dionysus gets a huge crowd into a hivemind to power the mysterious machine, only to find himself betrayed by Woden. Purely by accident Cassandra and Persephone find a secret room in Woden’s lair. It turns out that Woden is not who they thought he was–also, the mysterious machine may not do anything. And Minerva is not who we thought she was, either. Like some of the gods, I didn’t see that one coming. This collection contains an unusually diverse group of extras. There are several pages of variant art, and several process pieces (covering everything from writing to visual realization). I’m not sure enough happened in this volume; there was a lot of inconclusive action, and still far too many unresolved questions. But gorgeous to look at, as always.