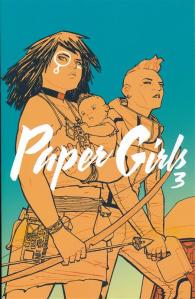 This collection opens with KJ awakening from a vivid nightmare, only to realize that she is still stuck in the prehistoric time period where we last saw the girls. The group rapidly meets a young native woman, then a huge furry predator, and finally a group of native men. But not before Doctor Qanta Braunstein (recently arrived in a time machine) meets them first. The time traveler doesn’t know anything about what is happening to the girls. But after they save her from the men, she sends them back to her time capsule before it automatically returns to the future. They’re too late–the capsule has already closed–but after getting sucked into the time stream of the capsule Tiffany finds herself on the night of Jan.1, 2000. But it’s not our time stream, because the dreaded Y2K shutdown actually happened. There has been a blackout, and giant robots are walking just in the background. 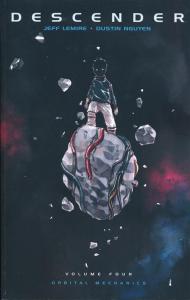 The previous collection ended with a cliffhanger, the two Tims engaged in mortal combat on the Machine Moon (the hidden asteroid headquarters of the Robot Resistance). At the same time Andy and Effie are on the planet Sampson trying to reconcile. And Telsa and Quon are trying to escape from the Machine Moon, which becomes even more urgent when they discover a huge cache of war-bots. The first issue uses an innovative three-panel grid to present the stories simultaneously. The rogue Tim pulls a fast one by pretending to be Tim-21 (the good one), which allows him to infiltrate Telsa and Quon’s mission. Andy’s scrapper team is closing in on their target Tim-21 when Driller admits to being the cause of all the human deaths on Sampson (including Andy’s mother) and asks to be ejected into space from the cargo hatch. Telsa has warned the UGC about the war-bot army–but bad Tim has warned his father that the fleet is on its way, so the Hardwire are ready. Telsa’s group heads to the watery planet MATA seeking a key scientist…then Telsa finds herself ejected into the water by Tim. This is a really exciting installment in the series, full of revelations and high stakes. 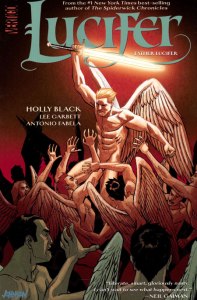 Strife above and below in this collection. With the throne of Heaven still vacant, the archangels battle each other for power. Things are no better in Hell, as Lucifer’s son Lord Takehiko issues a challenge to battle over the throne. He was introduced so casually in the previous collection that I wondered if he was a serious threat: he turns out to be one of the pivotal characters in this story. Lucifer is invited to observe, but of course it becomes much more than that. Meanwhile, God is reborn as a god of fire and brimstone, who scorns free will. There’s no way that’s going to turn out well. Lucifer and Mazikeen go to visit Elaine, who Lucifer made the god of the universe he created. He asks her to restore Noema Presto’s power over fate, and she restores his Morningstar powers while she’s at it. Lots of Lucifer back story referenced here. But the big setup is Lucifer and Mazikeen agreeing that they are going to have to find a way to kill God. 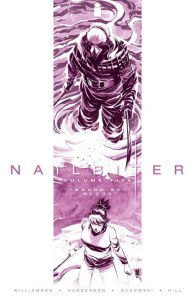 The Nailbiter saga begins to draw to a close in this volume (one more to conclude the series). It opens with the Nailbiter/Hack/Slash crossover, which serves as an effective prequel to the main serial killer protagonists in this arc. The Nailbiter is stalking another Buckaroo serial killer called Mister Fatal (who tries out “what ifs” on his victims, like seeing if they will die from a thousand cuts). Back in the present, Agent Finch is returning to Buckaroo to continue investigating the Butcher phenomenon, and offers the Nailbiter a ride. Alice (the daughter of Sheriff Crane and the Nailbiter) suddenly finds herself in the middle of the Butcher mystery rather than trying to investigate it. The central mystery of why Buckaroo produced so many serial killers is partially explained–and the Master behind it is still on the scene, so I expect an explosive series finale.