This is easily the scariest comic I have ever read, and I consider myself a horror comics fan. It starts out in a dark place, and gets darker as it goes. If you enjoy horror, you want to read this.

Much as I’m tempted to stop there, I suppose some description is in order. The story is about the Rooks family, who have just moved to the remote town of Litchfield, NH in hopes of a fresh start. There’s been tragedy and hard times for the family, which gets filled in via flashbacks over the course of the arc. Comic book artist Charlie had a drinking problem; Lucy is wheelchair bound after an accident; and their daughter Sailor was suspected of murder after the disappearance of her classmate Annie.

Things do not work out as planned. Sailor is still ostracized by her new classmates, as her reputation has preceded her. And the family gradually becomes aware that the town harbors a supernatural secret: they are in league with the titular Wytches, an ancient race that demands human offerings in exchange for miraculous cures and extended life spans.

The existence of the Wytches is initially so unbelievable that no one believes Sailor until she is taken. Charlie quickly comes to grips with the situation and goes to rescue her, a mission that takes him deep underground. But the biggest surprise awaits them when they return home, and Lucy reveals some shocking secrets. The first arc ends with a confrontation between the family and the whole town: then the Wytches arrive. Suspense is maintained right up to the very end. Terrific storytelling by the whole creative team.

The collection also includes Snyders “Who Would You Pledge?” text pieces from the monthly issues, which explain the genesis of the series, and the very personal connections he has to it. There are also several examples of the art processes, including the distinctive splatter effect used on some of the pages. Although it can be a little distracting, it does give the art a distinctive, hand-made look. 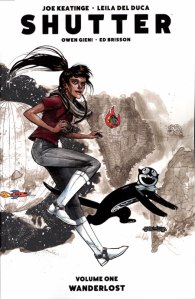 Science fiction, fantasy, steampunk, and adventure meet in the world of Shutter. It’s an Earth so different from ours that it almost has to be seen as an alternate Earth–but all of the craziness is presented as if it’s completely normal and expected. Our heroine is Kate Kristopher, who was born into a family of explorers: the series opens with her on the Moon, where her father has taken her for her seventh birthday. When the story proper begins it is exactly twenty years later, and Kate has walked away from exploring, as well as a successful career writing children’s books.

In fact she looks completely aimless. But while visiting her father’s grave (it’s a birthday tradition) she finds herself under attack, and everything changes. On the run, forced to rely upon her adventuring skills…plus there’s an enigmatic warning about her “other siblings,” a big surprise to one who thought she was an only child. When she returns to the family home looking for answers, she receives one shock after another. Apparently just about everything she thought she knew about her family’s history is wrong. However well-meaning the deceptions may have been, she now has no idea who to trust.

Nothing like big family mysteries to set up a series. And then there are the fantastically creative character and set designs. Where else would you see a New York City with aliens and pterodactyls, a wide variety of animal-human hybrids, a Victorian steampunk robot, and a talking skeleton butler? For all the wild cartoon invention, the action can be quite violent: the casualties really pile up at a couple of points in this first arc.  And it has one of the best cliffhangers I’ve seen recently.