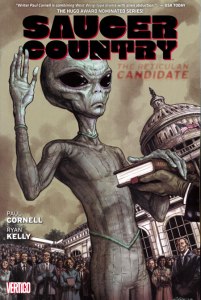 Saucer Country, Vol. 2: The Reticulan Candidate [Vertigo Comics, 2013] collects issues #7 – 14, completing the run of this Vertigo series. One of the perils of trade-waiting: I read the first volume about two years ago, then completely forgot to look out for the second one (the series had already been cancelled, so I was expecting one more to wrap things up). I went back and skimmed the first volume, since it had been so long. I like the series, but I can see why it may have been a hard sell. The core story is about politics–but then there are also three different theories about the reality of UFOs, with all the attendant conspiracies to hide them. By the end we know that some faking is going on, but not everything. The cancellation does seem to have had an impact on the storytelling: the story abruptly jumps from the primary campaign to the Presidential election. But that arc got three issues, so it doesn’t feel rushed.

I started reading Zander Cannon’s Heck [Top Shelf Productions, 2013] when it was part of the e-comic experiment Double Barrel. By the time I downloaded the first two issues of Double Barrel the project had completed its run, and collections of the two main stories had been announced, so I decided to just get my hands on those. It’s a quirky story about a guy who inherits his father’s house and discovers it contains a portal to Hell. So he goes into business visiting the departed to settle inheritance disputes. When he accepts a contract from his high school crush he learns surprising things about her, and about himself. It’s drawn in a deliberately sketchy, fast style, but is nonetheless both suspenseful and heartfelt. One interesting format detail: when Heck got collected the electronic (and print, from the look of it) version was reformatted. It’s now in landscape format, which read better on my 7″ Kindle Fire than the standard format used in Double Barrel. Not a big difference if you have a larger tablet, I imagine.

This weekend I read a Jonathan Hickman creator-owned miniseries that I completely missed, both when it was monthly and collected–which seems to be a recurring theme in my recent reading. Secret, Volume 1: Never Get Caught [Image Comics, 2014] (with artist Ryan Bodenheim) is a relatively traditional format for Hickman, a spy thriller. This was Hickman’s second collaboration with Bodenheim–after Red Mass for Mars–and the two have since launched The Dying & The Dead.  Bodenheim’s clear, realistic style and minimal backgrounds are well suited to the subject matter. A bit confusing at first, filled with significant events and characters we don’t know yet. But it all comes together pretty quickly. The conclusion is exciting, and mostly satisfying: it’s a payoff that was set up very early in the story.

Animal Man, Vol. 5: Evolve Or Die! [DC Comics, 2014] brings the New 52 version of the character to a close. I’m sure Alan Moore had no idea what he was starting when he expanded the Swamp Thing mythos to include the Green. The Red was created as a counterpart for the animal world, and the New 52 added the Rot to the dynamic. By the time of this collection the major conflict with the Rot had been resolved, and Buddy Baker faces an attack on the Red itself. In the end he needs to be powerful enough to defeat a rogue Totem, so Lemire came up with the Bridgewalker, an interstellar champion of all the worlds that contain a Red. It’s an expansion of the Animal Man universe, but knowing that the series was about to end, it looks more like a way to power up the hero. Lots of exciting fight scenes, ending with the Baker family reunited, and the Red under the control of new Totems. The return of Cliff never happens, but aside from that it’s a provisionally happy ending (Buddy has promised to assume the Bridgewalker role when needed, but has kept it from his family). Nice to see original series artist Travel Foreman back for the final issue (with some visual help from Lemire).