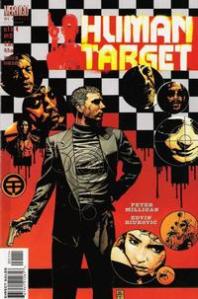 The second DC character called the Human Target was created by Len Wein and Carmen Infantino in 1972.  Christoper Chance (the Human Target) makes his living impersonating clients whose lives are in danger. Writer Peter Milligan and artist Edvin Biuković revived the character for this 1999 four-issue limited series. Milligan keeps the reader guessing about who is impersonating whom right from the beginning: we learn that Chance’s face was damaged while on a job, so his assistant Tom McFadden has been impersonating him. When Tom impersonates another client while impersonating Chance, the question of which is the “real” identity becomes confused for both Tom and the reader. In many ways it is really Tom’s story rather than Christopher’s. This was Biuković’s last illustrating job before his untimely death, and it’s a beauty. Good as Javier Pulido was on the succeeding graphic novel and series, I can’t help but think that Biuković’s presence was missed. One of the best Vertigo miniseries: a great read the first time, and complex enough to reward rereading.

Scene of the Crime: A Little Piece of Goodnight by Ed Brubaker & Michael Lark (another four-issue miniseries) was Brubaker’s first crime comic for a major comic publisher. It’s a tight little murder mystery set in San Francisco starring a slacker private detective. Both the world-weary tone and the use of a P.I. as narrator mark the series as a more conventional noir crime story than Brubaker’s later work in the genre. But it has twists galore, and Lark does his usual outstanding job illustrating it. Sean Phillips stepped in on inks after the first issue, making this his first collaboration with Brubaker. This was a really good month to be reading Vertigo comics! Human Target is still available in a collected edition, but the Scene of the Crime paperback has gone out of print.

Now for something completely different. Cruel and Unusual was an exceptionally crude social satire by Jamie Delano & Tom Peyer: John McCrea provided pencils and cover art, with Andrew Chiu on inks. It’s about a corrupt Florida businessman, who is given a run-down prison to run as a profit-making business (this is in addition to his fundamentalist Christian television network). When he sends producer Bobbie Flint to run it, they both get a surprise. Everything she does to provoke public outrage–beginning with televised executions–just makes the enterprise more popular, and more profitable. The story starts out totally coarse and cynical, and somehow becomes even more so as it goes, culminating in  a surprising conclusion where Bobbie bets the lives of herself and her daughter by giving the television audience the choice to execute either them or the scumbag politicians and prison administration responsible for the mess. I was going to describe the series as “intentionally crude,” even though that seems obvious. It’s both a black comedy and a satire, and it doesn’t waste any time on subtlety. What you see on the covers is what you get on the inside. I’ll admit it’s pretty effective, but I doubt I will read it again. 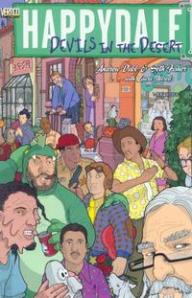 Happydale: Devils in the Desert was written by Andrew Dabb, illustrated by the late Seth Fisher, and colored by Laura Allred. It was published as two-part Prestige format Vertigo miniseries, an unusual format. This is a seriously strange story. It looks cartoony, but it’s quite violent. And what is the deal with this crazy little desert town? The action is driven by a trio of outsiders, who come into town after murdering everyone at a gas station (complete with a Satanic ritual), then blowing it up. They find themselves in a small town full of unusual characters, some of them downright freakish. Turns out that Happydale was created to be a haven for nonconformists, inspired by the town’s favorite son, a comic book creator named Davis Cartwright. It’s reminiscent of Dylan Horrocks’ fictional town of Hicksville, or Gary Spencer Millidge’s Strangehaven. The outsiders wind up in a hostage situation at the end of Book 1, which really gives the townsfolk a chance to show off their diverse personalities. The situation is resolved halfway through Book 2, and the dramatic energy gets diffused as the story splits off into separate story lines. That bit of structural weakness is the only sour note in an otherwise striking entry in the Vertigo back catalog. I can’t think of another book quite like it.