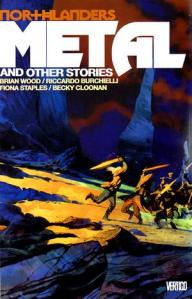 The centerpiece of this collection is the five-part story “Metal,” which is about the clash between paganism and Christianity in 9th century Norway. It’s certainly a story with dramatic possibilities: Wood chooses to tell it mainly by following a couple named Erik and Ingrid as they travel the countryside terrorizing Christians, burning every church they encounter. The twist is that they are both on a mission from the Norse goddess Hulda, who they actually see and converse with. This is a storytelling choice very much in the Vertigo tradition; the line has frequently been accused of too much magic and fantasy over the years. But it’s an odd approach in a title that has been grounded in historical fact. Life was hard in the Viking era, and much of the strength of Northlanders has come from unflinching depiction of that reality. So while the story was involving enough, I found it the weakest one so far. The other two tales are brief. “The Sea Road” is a single-issue story about a sea captain who ventures further west than any before him, finding both new land and doom. “The Girl In The Ice” is a two-parter about an elderly fisherman who finds a corpse frozen in the ice. What he chooses to do about it is what drives the story: finding out how she got there does nothing to change his fate. Bleak stuff indeed, even in a series not known for happy endings. 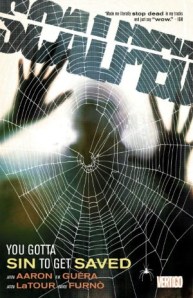 The series is headed towards its conclusion, but that doesn’t stop Aaron from throwing in some new complications, opening up several possibilities for how it may all end. The biggest one: in the middle of a battle for tribal leadership with his mentor, Red Crow names Dash as his successor.  Dash promises Red Crow he can be counted on 100%, while telling his FBI bosses that he is ready to take Red Crow down. Will he take down Red Crow or replace him? Only time will tell. In the two shorter stories “A Come-To-Jesus” is devoted to Wooster T Karnow, Sheriff from White Haven Nebraska, a minor background character who shows signs of becoming important to the story. And “The Night They Drove Old Dixie Down” shows Red Crow’s FBI nemesis Baylis Nitz go from disgrace and attempted suicide to a miraculous return to grace as a hero. It’s a truly surreal episode, with a tone quite different from any other issue in the series so far. The five-part title arc also checks in on Carol and Dino, and Catcher and Officer Falls Down. Catcher has his big confrontation with Dash, but saying anything more would be too much of a spoiler.

The group has decided to stay in town and build up the defenses, so Kirkman gets the opportunity to bring politics into the mix. Longtime community resident Nicholas makes a play to take the town back from Rick and his group. That threat is neutralized, but Abraham is having some thoughts of his own. In the midst of this Carl wakes up from his coma, which causes Rick to reflect on how much surviving has changed them both. Plus there are some significant relationship developments (saving the biggest one for the last page). This is a relatively low-key installment in the series, a breather after the massive zombie attack in the previous collection. But there is still plenty of character development, with groundwork laid for future developments. 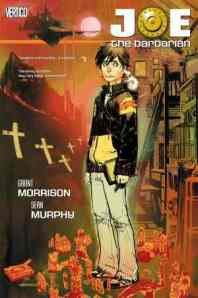 When a gang of school bullies take Joe Manson’s candy bar they inadvertently trigger a near-diabetic shock. As Joe begins to hallucinate, his effort to get downstairs for a soda becomes an epic journey through a fantasy kingdom. The most striking thing about the series is the visuals: Sean Murphy did an incredible job, it’s just gorgeous. He has a lot of fun with the DC-oriented toys in the story. There’s a lot of Batman, Robin, and Lobo, but John Constantine even makes an appearance in Chapter 6, in the crowd scene where all the heroes gather to follow Joe into battle. It’s especially striking the way he turns the house into almost a character in the story. He talks about that in his “Storytelling Breakdown” essay included in this collection.

The storytelling is Morrison at his most linear: the only other project I could compare it to would be We3 (which also featured talking animals, oddly enough).There was lots of potential to blur reality and fantasy, but he makes it clear that the whole thing is the product of hypoglycemic shock (at least until the very end). The narrative jumps from the fantasy world back to Joe’s actual journey through the house often enough to remind the reader what is going on, but not so often that the spell of the fantasy is broken. That’s a neat trick, not easy to pull off.

On my first reading I wondered if the story really needed eight issues. I still have that reservation after a second reading. Not that it’s padded, exactly, just that it might have been stronger if it were a bit more compact: six issues, say. 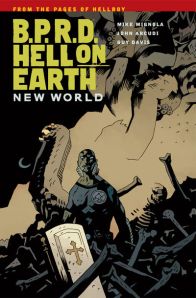 Collecting the first story arc after the conclusion to the series-long War on Frogs story line. Mignola really is serious about this being a new chapter, even numbering the trade “1.” I enjoyed having a story that was focused more on team dynamics, after all the huge world-threatening action in the preceding collection, not to mention the complex cast of characters, each with a long history. There is still plenty of connection to what went before. Andrew Devon continues to distrust Abe Sapien (understandable, since he believes Abe is the Antichrist!). Panya the ancient Egyptian mummy is beginning to manipulate people more obviously. And Abe runs into Captain Daimio, as well as Daryl the wendigo. In his Afterward Mignola acknowledges the more personal scale of this story, but he also promises that the new story line is called Hell on Earth for a reason. I just hope he takes his time ramping up the action.