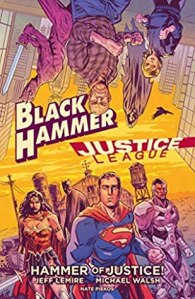 Jeff Lemire’s Black Hammer superheroes are a modern interpretation of classic superheroes to begin with, and are done with a light touch. So it should not be surprising that a crossover with DC Comic’s august Justice League–surprising though it is–comes with a sense of fun, like a good old fashioned annual summer crossover. The Justice League has had varied membership over the years, but Lemire was allowed to use a definite A list of characters: Superman, Batman and Wonder Woman (the big DC trinity) as well as the Flash, Cyborg,  Green Lantern (mainly the John Stuart version), Hawkgirl, Martian Manhunter, and Aquaman, Zatanna, and The Spectre.

The crossover event begins while the JL is battling Starro. A strange little man (who is apparently magical, and is described as “no man” by more than one of the heroes) appears and promises both teams a break from the usual. Next thing we know, the JL is on the farm, and the Hammer heroes are on the JL’s world facing Starro. Needless to say, both teams are totally confused. Bizarro World also figures into the story, with Colonel Weird and the Green Lanterns both visiting. Colonel Weird’s access to the Para-Zone is the ultimate solution. He can see that the crossover is not natural, which finally reveals the source: troublemaking imp Mr. Mxyzptlk. This might have been expected in a Silver Age story, but comes as a surprise here. In classic crossover style, both groups of heroes finally collaborate.

The collection concludes with an extensive group of variant covers, as well as artist Michael Walsh’s Sketchbook. This includes several pages of art in both color and black & white, covering interior art as well as cover images.

The family drama/ecological horror series concludes here. It spends a lot of time in the present–five years after the big transformational event–while also including flashbacks that fill in details about the family’s transformation. The struggle against the Arborists continues. They are still looking for Meg (fully changed into a tree now), who the family transplanted before they could destroy her: they are convinced that she is the key to the changes in the ecology, and that by destroying her they can reverse the changes. They capture Josh’s mom, drawing him into invading their camp,  while leaving Josh’s wife Sarah to defend Meg.

The big climax is pretty anticlimactic: nothing obvious changes in the new world, but all of the deceased family members gather together in the spiritual tree consciousness we have seen earlier (which never is explained in any way). Josh and Sarah have returned to his family home, where they bury his mom. And their daughter Jessie shows signs of transforming into a tree in the last frame. So the moral is, it’s not really a horror story, because the world is better off without humans in it? Or at least, that change is inevitable, and maybe morality doesn’t enter into it. Not completely convincing in the end, although the action and the artwork carry it along. It probably would have been easier to follow if it had been collected into two six-issue compilations instead of three four-issue ones.

A return to classic John Constantine (with pitch-perfect Darick Robertson art), this is almost literally an origin story, beginning with Constantine’s birth and his mother’s death during childbirth. He says “I was born guilty,” and that’s just the beginning. Young John rebels against his father by doing the opposite of what he’s told, which means going down to the river, smoking, and doing magic. A summoning performed with friends goes wrong, in a way a bit reminiscent of the famous Newcastle incident in which John lost two friends.

In the present, rich, famous people start falling from the sky while wearing angel wings. This is so Hellblazer that I almost couldn’t believe it. Naturally there is a deep backstory behind it, which ties back into the failed childhood summoning. But first. Lucifer Morningstar shows up in John’s apartment, and he wants his wings back. It’s a wonderfully twisted tale, with the ever-resourceful Constantine outsmarting demons (as usual) and Lucifer a much more helpful ally than usual. The magician does not escape his guilt, but he manages to help his friends escape theirs–while also giving an unexpected gift to his fellow citizens.

The three issues collected here were originally in a magazine format, about 50 pages each and in a larger format than standard comics. In the e-comic form I read it in the screen shape was unusual, but it worked. The collection concludes with a variant cover gallery and a collection of Darick Robertson black and white sketches.