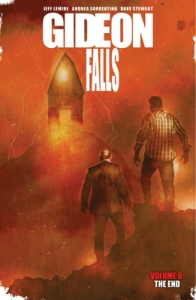 Gideon Falls has been a tale of interdimensional craziness, so it feels appropriate for the series finale to be presented as a single graphic novel-length issue. It certainly helps keep the action straight as all of the “Gideon Falls” universes finally converge. One character describes the convergence as “collapsing into the center,” which gives rise to many surreal visual sequences involving rising and falling, or different realities depicted as mirror images of each other. Since these images are not possible in the real world, they sometimes look rather abstract–but Sorrentino finds a variety of techniques to illustrate the changes (I’m reminded of the challenges Grant Morrison presented to his artists on Doom Patrol and The Invisibles).

If there is any difficulty following the narrative, it is mostly due to the regular shifting between realities (along with the group of characters associated with each), which has been part of the series all along. Here it is more accelerated, as if several of the previous collections had been compacted into one. After some trippy visuals like an Escher-like impossible staircase, the story ends with Clara and Danny in a park. They are talking about the family, Father Fred, and Danny’s therapist Doctor Xu. The final panels show Danny finding a fragment of the Black Barn, followed by the Smiling Man. It looks circular, like the start of a new cycle: as much a new beginning as an end. I suppose some kind of definitive conclusion would have been nice, but inconsistent with the rest of the story.

The collection includes the entire Final Script, plus “The Inner Workings of Gideon Falls.” This features an actual Multiverse Map, along with several diagrams showing how the Barn interacts with the universe’s timelines. It would have been useful to have these earlier!

We first see the titular Home Sick Pilots–a high school punk band–attending a show by their rivals Nuclear Bastards staged in an abandoned bowling alley. Their guitarist and lead singer Ami has a brilliant idea to top that gig: play a show at the local haunted house, the old James house. Putting on a brave face she goes there to check it out, and immediately feels a kinship with the place.

The next morning her band mates come to the house looking for her, where they meet up with the members of Nuclear Bastards. After one of them stabs one of the Pilots attempting a robbery, the house suddenly goes into full Horror Movie Haunted House Mode, and quickly kills all of the Bastards, while also magically reconfiguring itself.

After that the story departs from the standard haunted house script. Usually they work like a magic circle, with the horrors never leaving the house. But in this case parts of the house have been stolen, and the house sends Ami to retrieve them. After a few missions she encounters other ghosts, and realizes that the house has been lying to her. Returning to the house, she uses the ghosts to move the house like a big animate creature. This is another novel haunted house move, but something even more unusual closes the arc. There is a government agency trying to weaponize ghosts, and Ami is set to pilot America’s first walking ghost-powered weapon.

Points for coming up with an original haunted house concept, and Wijngaard’s artwork is an effective, mostly representational young adult presentation (but the black and white pages depicting Ami’s thoughts also work well, providing a stark contrast to the rest of the book). I’m certainly not the target audience for this series. While I enjoyed it, I do not expect to continue with it. 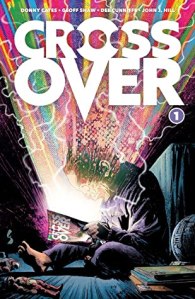 Another comic with a unique core concept: the Crossover of the title refers to an actual event that occurred in 2017. It was like a superhero summer event that exploded into the real world. Almost every fictional comic book character suddenly appeared in Denver, Colorado, fighting, killing and destroying the city. No one knows the death toll, because a few months into the Crossover one of the superheroes put a forcefield around the entire state, where it is apparently still happening.

Cut to a comic shop in Provo, Utah which is flourishing because it is the only shop selling pre-event comics. It seems that seeing superheroes in action killed the desire to read those comics. As the proprietor puts it, “Marvel and DC died when Colorado died.” When a young comic book character named Ava shows up in the shop she is easy to spot: the distinctive dotted pattern of classic newsprint comic book printing gives her away.

From here Cates and Shaw go increasingly meta. There’s the news story about comic book writers found dead: Chip Zdarsky, Scott Snyder, Robert Kirkman, and most recently Brian K. Vaughan. And there are indie (mostly Image) comic book heroes, featuring Mike Allred’s Madman. Cates also works in the super-sword Valofax from his own God Country series, before the human/comic book group makes its way into the Dome. There they meet comic book characters like the Savage Dragon, Colonel Weird from Black Hammer, and Hit-Girl. Back in Utah, Ellie makes a big reveal about her true origin. Let’s just say that she and her parents are not from Denver.

Shaw’s artwork completely sells the story, whether he is depicting the real world or the comic book character world. The collection’s subtitle comes from Todd McFarlane, who appropriately contributes a Spawn-themed variant cover, joining a large collection of other variants. There is even an extensive credits page for all of the comic creators who gave permission for the use of their characters. These are not the kind of comics I’ve been reading recently, but I am still looking forward to reading the next chapter.