Well, this is embarrassing. After declaring the end of the Miniseries Tour I find there are a few late entries I overlooked, and some others from a couple of years earlier. So it looks like there will be a few more stops on the Tour. 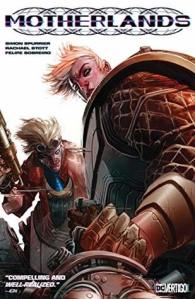 One thing I can say about the later Vertigo miniseries: they were still swinging for the fences, with wildly original concepts. Must have made a hell of an elevator pitch. This one takes place in a network of parallel realities where a nearly infinite set of alternate human civilizations mesh together (reminiscent of writer Rick Remender and Italian artist Matteo Scalera’s Image series Black Science, which began in 2013 and was still running in 2018 when this miniseries was published).

There are outlaws that hop from one universe to another, and bounty hunters called the Retrievers that chase them. The most famous and successful of them was Sylvie, who also had a huge reality show in her heyday. Hunter Tabitha Tubach is her daughter, but she is very different from her mother: chubby rather than sexy, and straight-laced rather than flamboyant. But when a lead points to Tabitha’s brother (who went with Sylvia’s husband, and is now a famous outlaw in his own right) the two women form an uneasy partnership.

So this is ultimately a family story, despite the sci-fi setting (another thing that aligns it with Black Science). The family drama was a major part of the backstory, and it continues into the current narrative. The resolution is full of twists, including a cloning that redefines the mother/daughter relationship. The Sylvie who partners with Tabitha is both her mother and an extension of her, which results in a kind of hyper-resolution. And Tabitha continuing in her mother’s role as a reality star.

The whole parallel realities thing never completely connects, but shifting between them is an effective narrative device (especially visually). The family narrative seems unresolvable, but it does conclude, with Tabitha still standing and ready to continue as a Retriever. Could even be a sequel, although that seems unlikely now. 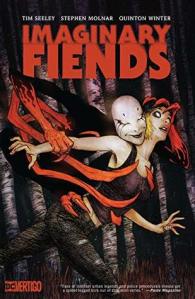 Another imaginative concept from horror writing veteran Tim Seeley and artist Stephen Molnar. The key element is that childhood imaginary friends are real–hence the word play of the title–and are in fact Interdimensional Mental Parasites (IMPs) who prey on the minds of humans. The story opens with a horrifying childhood stabbing, then shifts to six years later in a juvenile detention center. Melba Li (who did the stabbing) is a patient having a rocky eighteenth birthday. She receives a surprise visit from an FBI agent with a surprising proposition: he wants to recruit her to the IMP unit. Seems that he believes in the existence of IMPs, but only human hosts can see them. He wants Melba and her IMP Polly Peachpit to join the Bureau as field consultants.

Since her alternative is transfer to a tough adult prison, Melba agrees. Her first case takes her to a small town in the middle of nowhere, investigating a missing child. Special Agent Crockett is interested because the boy was on a watch list of potential IMP hosts. Meanwhile (unbeknownst to Li and Crockett) the brother of Li’s childhood best friend and victim is on his way to them, with the aid of his own IMP. On top of that, the missing child case starts to point towards some sort of local conspiracy. And there’s even a brief detour to explain how the IMPs came to our world from a higher dimension: this story is based on a novel cosmology.

The town’s conspiracy centered around another IMP, and the grand finale finds the conspiracy circle falling one by one, while the two strongest IMPs fight each other for supremacy. Melba finally comes to terms with her past trauma, and she and Crockett solve the case (along with Polly Peachpit). Not exactly a happy ending, but a nice resolution. The final scene shows her, Crockett and Polly leaving the FBI offices for a new case.

Pretty crazy concept here, although I suppose it’s no harder to accept than parts of Swamp Thing, The Invisibles, or even Sandman. Molnar has a generally realistic style, but he does a convincing job illustrating the other-dimensional beings, and his humans are also distinctive. 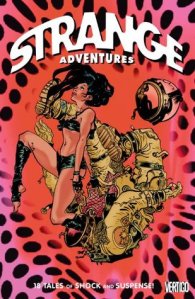 A compilation of two science fiction themed Vertigo anthologies: Strange Adventures 1 (2011) and Mystery In Space 1 (2012), which both used the 84-page saddle-stitched format that Vertigo adopted for their anthologies during this period.  There are 18 short stories included, each about 8 – 10 pages long. So as always with anthologies like this the reader is on to a new story every few minutes, whether they were enjoying the current one or not.

There are a wide variety of creators represented. Strange Adventures arguably had the most high-profile stories. “A ‘True Story’ from Saucer Country” is a short story set in the universe of writer Paul Cornell and artist Ryan Kelly’s Saucer Country series (with guest artist Goran Sudžuka). It was also reprinted in the first Saucer Country trade paperback.  An eight-page teaser for Brian Azzarello and Eduardo Risso’s nine-issue miniseries Spaceman presented the opening sequence of the first issue. And Jeff Lemire wrote and drew “Ultra The Multi-Alien,” an evocation of the original DC Comics Silver Age Strange Adventures series. In “Case 21” Selwyn Seyfu Hinds and Denys Cowan tell a story about a dystopian future in which tattoos are used to indicate social status. Peter Milligan and Sylvain Savoia tell a haunting story about two friends–each of whom may or may not be imaginary–in “Partners.” In “All The Pretty Ponies” Lauren Beukes (the South African novelist who wrote The Shining Girls and Broken Monsters) and Inaki Miranda tell a lurid tale about the rich using MindRide technology to experience slum life–until everything goes horribly wrong, raising the question of who is dreaming whom.

Notable stories in Mystery In Space include “Asleep To See You” by Ming Doyle and Jordie Bellaire, which tells a touching story of two lovers reunited after time differences caused by space travel; while Nnedi Okorafor’s writing in “The Elgort” benefits from Michael Wm. Kaluta’s fantastical depiction of the title monster. “The Dream Pool” combines Kevin McCarthy’s writing and layouts with Kyle Baker’s distinctive cartooning; and Mike Allred and Laura Allred contribute a psychedelic exploration of the cycle of birth and death in “Alpha Meets Omega.”