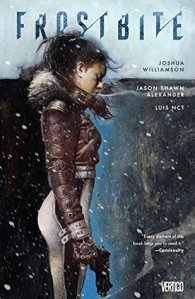 Frostbite is set in a frozen future dystopia (“Fifty-seven years into the new Ice Age”). The setting certainly isn’t unique–Snowpiercer immediately comes to mind–but the title disease is. This is not your garden-variety frostbite: it is a plague that freezes its victims from the inside out, and there is no vaccine or cure.  Or maybe that is about to change: Keaton and the crew of her cross-country cargo hauler Icebreaker have been hired to transport Dr. Henry Bonham and his daughter, Victoria, 2,000 treacherous miles from snowbound Mexico City to a secret government installation on Alcatraz Island, where they can complete a theoretical cure.

They are not the only players. Before they can even finish preparations for the trip they come under attack by a group of Fuego’s men. Fuego is a rich, powerful gangster, and he has a personal motivation: he has been stricken by frostbite. Travelling to Alcatraz becomes a saga: first Keaton’s group is attacked by a couple of Mad Max style extremist cults, then Fuego’s vehicle (ironically named the Titanic) swoops in. Lots of action, and an especially complex relationship between Keaton and Victoria. After the cure is developed, it turns out to be too late for the severely afflicted. Keaton goes into the world to distribute it for free. And in the final frame Fuego (whose disease has mutated into something other than frostbite) vows to go out and find the elusive Keaton. In other times that could set up a sequel, which now appears unlikely.

Jason Shawn Alexander has a loose, impressionistic style that works well for this story. He even makes the snow scenes work, aided by imaginative coloring by Louis Nct. The collection closes with a collection of their covers, in full size.

This is a direct sequel to the 1987 film (it ignores previous sequels, in any medium). So it is a licensed property, only the second one in Vertigo history. The first was Sleepy Hollow: The Official Comic Adaption of the Film From Paramount Pictures and Mandalay Pictures–Steven T. Seagle, writer; Kelley Jones & Jason Moore, artists; Daniel Vozzo, colorist (Vertigo Comics, 2000).

I’ll confess to not going back to reread Sleepy Hollow, but I think I can safely say that this is better. The creative team have enough space to tell a full story (six issues), and seem to have been given enough creative freedom to do so. The setting is again scenic Santa Carla, California. In addition to the great beaches, the place has a history of vampires. The Emerson brothers (Sam and Michael) and the Frog brothers (Edgar and Alan) were the  underage slayers that took on the vampire master Max and his pack of punked-out minions in the film.

They thought the vampires were defeated, but now a coven of female undead called the Blood Belles has moved in, and they’ve targeted Sam, Michael, the Frog Brothers, and every other vampire hunter in Santa Carla for bloody vengeance. But they are not alone: there is also a certain shirtless sax-playing savior known only as the Believer (modeled on saxophonist Tim Cappello, who appeared in Tina Turner videos for music from Mad Max Beyond Thunderdome, as well as playing “I Still Believe” in the Lost Boys film). You remember him: he had an oiled, sculpted bodybuilder physique and wore only chains on his upper body.

The team manages to prevent an ancient vampire apocalypse, and the Blood Belle Star chooses to forgo immortality. She throws the ancient blood that would grant her immortality into the sea, and it falls into the hands of one of the vanquished vampires. This could be a sequel setup, but that time has clearly passed. Veteran horror writer Tim Seeley fully enters into the film’s world, and artist Scott Godlewski (who was seen just previously on the Vertigo miniseries The Dark And Bloody) turns in an effective performance, limited by the necessity of portraying many of the characters in a way that evokes the original film actors.

Vertigo miniseries tend to have a fairly deliberate pacing, and employ various blends of fantasy, horror and realism. This one is completely off the wall, in a good way. It tells the story of an epic adventurer named Antonio Luna (who is nonetheless completely unknown) and Val Richards, the woman hired to ghostwrite his autobiography.  Luna’s stories about himself are completely unbelievable on their face, yet events keep supporting their reality. Beginning with Val’s initial interview with Luna on his deathbed–except he lied about his terminal condition to bring out a team of undead mummy assassins.

As he dies, the last assassin tells Luna that their real purpose was to deliver a message. Everyone Luna has known in his long life is targeted for death, so there will be no one to tell his story. Against her better instincts, Val agrees to accompany Luna so she can tell his story. Everywhere they go–Paris, Iceland (where he had inspired a Church of Luna), and finally Nocturna Island, the place of Luna’s childhood–they are too late to save the people in his life.

The story concludes on the Moon, which is populated by werewolves (no, really, and they get there via a rocket that Luna built as a child). There they confront Luna’s father, Leonardo Luna. It turns out that he chose Val as ghostwriter, based on her only real success, her one published book. As they return to Earth egomaniac Luna finally expresses an interest in learning other peoples’ stories, beginning with Val’s.  The whole experience frees her to finally become the writer she always wanted to be: fearless, and ready to surprise herself first.

It’s an unexpected conclusion, one more surprising twist in a series that is full of them. Riley Rossmo’s art has a crazed and dynamic energy, featuring visuals and panel layouts that propel the story along at a breakneck pace. I know Joshua Williamson’s writing best from his Image series Nailbiter: this mini has a similar crazed motion. It is very different from his earlier Vertigo miseries Frostbite, but just as effective, albeit in a different way.