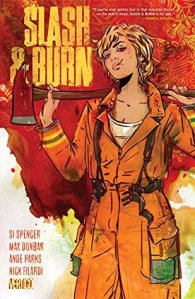 At first this miniseries looks like a cliché: a firefighter who is also a pyromaniac. But it quickly turns into a more complex story about protagonist Rosheen Hayes’s past: how she lost her parents, the time she spent in an orphanage with a group of pyromaniacs who called themselves The Sparky Club; and her confusing relationship with the town mayor.

All of these threads are revealed through a series of flashbacks. But the immediate problem is figuring out who is murdering her childhood friends, and why. Like most murder mysteries, Rosheen’s investigations lead her down blind alleys, with a surprising final suspect. But it all comes down to the one pulling the strings, and the solution she had already planned.

Rosheen is both a murderer and a pyromaniac. But as the most ethically motivated character she definitely qualifies as an anti-hero, as well as the last person standing at the conclusion. The art team delivers a classic Vertigo look–mostly realistic, with just enough background detail to tell the story–and Spencer has crafted a story that builds to a great conclusion (even if it may be twistier than necessary). 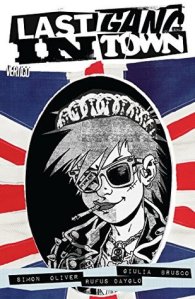 The main action in this miniseries takes place in London, in 1977. It’s the era of punk rock, and the opening scene finds a trio of punks ripping off equipment from the band Pink UFO (probably modeled on Pink Floyd, the sort of establishment rock stars that punk was reacting to) so they can play a gig that evening. They make off with the goods, but not without a mad chase escaping the band’s roadies. At this point there is a brief flash forward to 2018, which does not mean much until later in the story.

An upper crust would-be seditionist named Ava recruits two of the punks (along with a third who exhibits a similar attitude) to form a criminal gang. They earn their title of “last gang in town” by virtue of being the first (and last) organized crime since the passing of famous British gangsters like the Kray brothers. Britain is about to celebrate the Queen’s Silver Jubilee, and it turns out that Ava has an ultimate goal: to steal the Crown Jewels, the biggest possible score, and the one with the greatest symbolic value.

Eventually her true motivation is revealed: she had been in love with a dashing thief who disappeared attempting the same heist. In the end they are caught in an outlandish, convoluted trap and exiled to France (the depiction of the Queen of England is positively thuggish). Meanwhile, back in 2018 (there have been a series of flash forwards, in dialog with the 1977 events) recently deceased Ava has called the gang together for one final act. They are taking on the global one percent by taking out their Currency Unit Manipulator, an orbiting A.I. system that maintains the wealth of the super-wealthy. This brings the story solidly back to the present, although the action is no more believable.

I can’t say I completely enjoyed this: it’s too convoluted for its own good, and didn’t really make sense until the end. It certainly had the punk attitude, though. Rufus Dayglo’s art makes explicit reference to underground comix, and his character designs delight in extreme caricature. I love his little notes and cartoons in the margins, which frequently make reference to alternative music (of more recent vintage than punk rock). 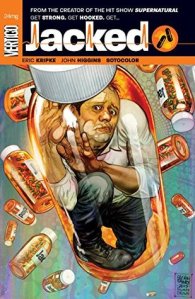 For writer Eric Kripke (creator of the TV series Supernatural) this was his writing debut for comics. But he had two of Vertigo’s old hands on art: John Higgins (Hellblazer) on interiors and Glenn Fabry (Preacher) on cover art. Protagonist Josh Jaffe is a middle aged man in the midst of a mid-life crisis, out of shape and unemployed (in his Foreward Kripke reveals the autobiographical basis for the story, describing it as the most personal thing he has ever written, or is likely to). Josh is willing to try anything to change his life, so he buys a “smart pill” called Jacked over the Internet without knowing much about it.

At first nothing seems to happen; then he starts hallucinating while on an outing with his son. But the real shocker comes when he rescues a man from a car crash by ripping a door off the hinges and carrying him to safety over his shoulder (thinking “my back feels great,” despite his former back trouble).  Clearly the effects of the drug have gone far beyond just stimulating his brain. He makes a call to the drug inventor’s help line, but while waiting for an answer he can’t help but keep taking Jacked. When he goes next door to confront a neighbor things get way out of hand. It turns out the man is a drug dealer, and putting him in the hospital is going to complicate his life.

In short, becoming a real life superhero is messy and complicated. Stopping regular doses of Jacked causes painful withdrawal symptoms, so that’s not an option. Even after breaking Jacked’s inventor out of prison Josh eventually runs out of pills. Just in time to save his family from the drug kingpin who is holding his family hostage–which he accomplishes with a clever plan and no superpowers. Josh and his family live happily ever after, and there is a little twist at the end that makes the Jacked story open ended. There could be a sequel, although there is no indication that one is planned.

This miniseries has a classic Vertigo feel to it, not least due to the familiar look of the art. It was great to see Higgins and Fabry in action. Kripke writes about his appreciation for the difficulty of crafting comics–implying that this may be his only attempt–but that would be a shame. I’d certainly like to read more comics created by him.