Writer Kieron Gillen may be the world’s biggest nerd. Phonogram, his first big creator-owned project, related directly to his career as a music journalist and die-hard music fan. Die (which takes its name from the dice used in role-playing games like Dungeons and Dragons, although the body count is pretty high as well) relates to his history with RPGs as a player, as well as his work as a computer game journalist.

The main players are a group of six friends who get together to celebrate a birthday in 1991. One of them has designed a new game for the occasion, and the next thing anyone knows they have all disappeared. They reappear two years later–minus one member of “The Stafford Six,” as they have come to be known (Sol, the master of the game)–with no memory of where they have been in the interim.

25 years later Sol’s die mysteriously reappears, and the group gets together to decide what to do about it–only to be transported to the fantasy realm that they escaped from as teenagers. This is all in the first issue! Sol greets them and tells them he’s not only still alive, but he defeated the Grandmaster of the realm and assumed his role. He has called them back to finish the game. The rest of the arc follows their adventures as they figure out how to defeat the Grandmaster and return home to their world.

It goes without saying that they do not go home at the end; it’s pretty clear that the series means to show their struggles to get back, which is more complicated than it appears at first. The story makes reference both to RPGs and the fantasy literature they came out of (e.g. Tolkien, who is the focus of one issue, as well as C.S Lewis’ Narnia books and Mervyn Peake’s Gormengast series). So the story is bound to be more relatable if the reader shares that background. Personally, I have never played a RPG, and my reading includes Tolkien but not the others. So I felt a bit of distance, but the fantasy setting is somewhat self-explanatory. Stephanie Hans’ artwork is gorgeous, which makes it easier to enter this world. 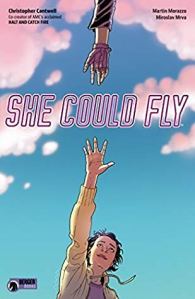 This is my first Berger Books project, and it certainly has the tone of a Vertigo book. The title makes it look like the story is about a mysterious flying woman who was seen in the skies above Chicago 11 times over the course of 51 days: until she dies in a fiery mid-air explosion (which happens in the first of the four issues in the collection). But really it is mainly about a troubled young woman named Luna, whose obsession with the flying woman takes her into unexpected territory.

There is no indication that the flying was considered superpowered or supernatural, and so it is no surprise that Luna’s investigations lead her to defense contractors, U.S. government agents, and foreign government agents. It’s enough to result in a complicated, action-packed climactic shoot-out. In the end Luna finds a way to face her mental problems and seek help, which feels like the main point of the story.

Cantwell makes his comics debut here: he is mainly known as the co-creator/showrunner of the AMC’s show Halt and Catch Fire. Morazzo is known for the Image Comics series Great Pacific and Ice Cream Man. Together they created a dynamic comic. It feels like it is being pulled in different directions: is it an action story, or is it about mental illness and healing? Perhaps a sequel will have a clearer focus. 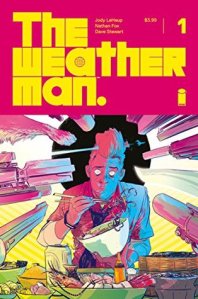 The year is 2770, and Nathan Bright is the titular weatherman. He is a huge television star on terraformed Mars, beloved for his outrageous behavior and irreverent attitude. The Martian citizens need the diversion, because they have a lot to forget: a terrorist attack has wiped out nearly the entire population of the Earth, which leaves almost everyone in mourning. While on a second date with his “girlfriend” Amanda everything changes. He finds himself under an armed attack, with a second armed force (including Amanda) defending him. They survive the attack, but then Amanda points a gun at his head and informs him “You’re under arrest for the murder of eighteen billion men, women and children.”

Turns out that both groups are convinced that Nathan is really the U.S. soldier/mercenary Ian Black. Black supplied the terrorist group Sword of God with the weapon used to destroy Earth, then had most of his memories removed by a fringe neuroscientist who had developed an experimental procedure that allowed her to remove and replace memories. The Martian security forces Amanda represents want to get Nathan’s memories restored so he can help prevent the destruction of the rest of humanity promised by the Sword. The other side is just looking at the money to be made by taking public revenge on him.

And the chase is on, a breathless nonstop action romp very reminiscent of Rick Remender’s science fiction series Black Science and Low.  This opening arc concludes with a return to the scene of the crime: Nathan sees the Earth through a spaceship window. The collection also includes a large set of alternate covers by Marcos Martín (who contributed several) and others.

It’s a strong start for the series, although I wonder if the nonstop action can continue. Fox’s art is wonderfully kinetic, and he excels at expressive facial expressions. Stewart’s coloring is bold, avoiding the drab palette sometimes found in a story like this.