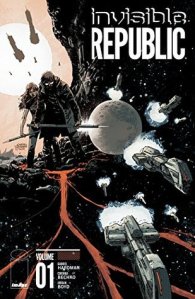 I’m a big fan of Hardman’s Image series Kinski, but I somehow missed this one, so I’m catching up. Very different setting: the year is 2843, and the action takes place on Avalon, a remote colonized moon in the Gliese System. Disgraced reporter Croger Babb has come in search of a story about the recent fall of the dictatorial Malory regime and its effects on the population. No one wants to be interviewed, but purely by chance he runs across the papers of one Maia Reveron.

Turns out that she is the largely forgotten cousin of Arthur McBride, the dictator who had been in charge. Her memoir tells a very different story than the one related in his official autobiography: the tale of Arthur’s initial rise to prominence forms a running alternate story line throughout this arc. Babb is not exactly sure what he has, but when someone threatens to kill him for it he knows it’s important. After partnering with another journalist who know the moon (Woronov), they quickly find themselves meeting a surprise character at the close of what is labelled as “Chapter 01.”

Hardman’s usual story telling skills are on full display here: creative panel layouts and expressive facial expressions are two of his strengths. The colors are dark and muted, in tune with the bleak setting. Boyd still manages to differentiate past and present with a slightly different color pallet: perhaps ironically, the past is the brighter of the two. The collection concludes with a map of the planet Asan and its moons, two text articles relating to the story by Bechko, and the individual issue covers. 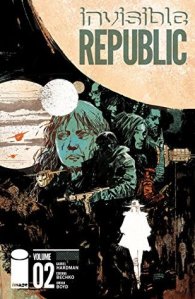 The second collection opens with the return of the Lady Pannonica de Roths, Baroness of Kappa Valley (frequently just referred to as the Baroness–her name is so similar to real life Baroness Pannonica de Koenigswarter, a famous British-born jazz patron, especially of bebop musicians like Charlie Parker–that I doubt it is a coincidence, which is further confirmed by both women having the nickname “Nica”).

She became an exile when McBride became dictator, but their relationship was complicated, as the flashbacks to the early days of the revolution make clear. She is also no friend of Maia Reveron, as Woronov and Babb see first hand when Reveron’s headquarters are attacked by an armed force. Both of them want Reveron’s journal (which she reveals had been created during her 15 years in prison) in order to control the historical narrative.

The Earth authorities are very interested in the journal as well, as Woronov discovers when she attempts to retrieve it from the orbiting headquarters of Earth’s viceroy. Babb has to come up to unlock the case, and surprises everyone by burning the journal at gunpoint. But he has the last laugh: he has already sent the contents to his ex-wife/editor, entitled “Invisible Republic: The Journal of Avalon’s Forgotten Woman,” with his Foreword–which she is about to publish.

The surprise at the end of the first volume certainly pays off here, although the story ups the ante with several further complications. Despite all of the history of the early years of McBride’s revolution, we never find out how the Baroness fell out of favor, or why Maia spent so many years in prison. Do either of them really have the moon’s citizens best interests at heart, and what part does the Earth government play?

Still a fine, character-driven story, although the murky color scheme has come to feel like a negative. The story might actually be better served in black and white. 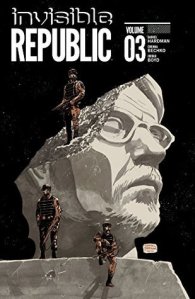 One thing has certainly resulted from the publication of Maia’s journal: this volume opens with Babb visiting Earth on a book tour celebrating it, to great acclaim. But he keeps hearing concerning news from back in Avalon, especially the rumor that his friend and fellow journalist Woronov has been killed on Maia’s orders. Despite the difficulties, he chooses to return to Avalon.

He returns to a mess. The Baroness Nica has been placed in charge of the government, in a nod to the earlier structure. Maia is still trying to make some kind of deal, and thinks that Babb’s publication of her diary has hindered more than it helped. But she still acknowledges Babb’s role, and presents a document that proves that the Mars oversight government was responsible for Woronov’s murder. This contradicts an earlier scene showing the disposal of her body that strongly implies that the murder was done on Maia’s orders.

Rogue resistance forces launch an attack which kills Nica (not approved by Maia, and done without her knowledge). Her daughter Shae takes control of the government and promises retaliation against the rebels. In just a few pages it is revealed that the rebel leader Henry is Maia’s son–and Shae is the daughter of Nica and McBride. So the political situation is actually generational. News to Babb, and to the reader. When the government forces attack Maia’s headquarters, she and Babb head off to negotiate with Shae.

At his point the series went on hiatus. leaving several big questions unresolved. It has to be said that the history of any series returning after a two year hiatus is not promising. But this is a rich, complex political story, and it would be a shame if it was not resolved. I hope that a conclusion happens, even if it is briefer than the one called for in the original series plan.

Freelance Journalist & Musician; Senior Contributor, All About Jazz.com; writing on comics at mrvertigocomics.com & No Flying, No Tights.com
View all posts by marksullivan5 →
This entry was posted in Image Comics and tagged Corinna Bechko, Gabriel Hardman, Jordan Boyd. Bookmark the permalink.