The series finale begins with Dylan in a mental institution. After months of no vigilante activity–and not seeing the demon–the demon suddenly reappears. As usual only he can see it, and he winds up attacking his roomate thinking he is the demon. Hence the insane asylum. There his therapist tries to convince him that the demon was imaginary, naturally. Dylan plays along, despite continuing to see the demon everywhere. After sufficient medication he even convinces himself that he had been imagining the demon all along.

Meanwhile back in the city a copycat vigilante has been killing people. Of course this makes Dylan’s claim of being the vigilante look like some sort of weird fantasy. When the vigilante is killed by the police, the case is closed, the task force disbanded. But Detective Sharpe sees too many loose ends, and continues working on the case (despite it being officially closed). That’s how she attracts the attention of the Russian mob–remember them?–and they follow her to the asylum where she goes to talk to Dylan. They intend to finally exact their revenge on Dylan for his mob killings.

My narrative so far hasn’t been exactly spoiler free, but now I’m looking at the end game. There is no way to to discuss the series ending without going into details. The Russians attack the asylum, which leaves Dylan and the detective fighting their way out as the only choice. Just when it looks like they have gotten out, they encounter one last Russian in the parking lot. This is where the story goes in several different directions. First ending: Dylan dies in the parking lot. Second ending: Dylan survives, and goes on to continue his vigilante activities, with Detective Sharpe’s blessing (which can be seen as a dying fantasy, like his life passing before his eyes). Third ending: Dylan dies, but his girlfriend Kira comes to share his pessimistic view of life…and the demon appears in her mirror in the final scene.

So in the end Brubaker tries to have it both ways. Dylan was crazy, and the demon was all in his head. The demon was real, and has appeared to many other people. Or a third possibility: the demon is just a manifestation of the difficulties of modern life. After playing with the question of whether the demon was real or imaginary through most of the series, I was expecting a definitive answer in the conclusion. I did not get it, and would hesitate to recommend the series for that reason.

The big machine war arc begins with first contact with machine society by a human scientist, four thousand years in the past. It establishes a significant back story to the appearance of the Harvesters which kicked off the major action in the series. The machines–the Descenders–had given mankind an opportunity to share the universe with machinekind. Mankind failed the test, having built robots to be slaves.

The destruction of the human worlds that followed left only a few humans, and the advanced robots were undiscovered for thousands of years. Their discovery by Dr. Solomon and Dr. Quon led to the creation of the advanced robots represented by the Tim series. Tim was descended from robots that were descended from the Descenders. The Harvesters–destructive as they were–were only meant as a warning. The human response was to seek out robots and destroy them. All of which led to the revolt of the remaining robots, and the power struggle between the human worlds.

When Tim-21 and the surviving ancient robot make contact with the Old Ones (the original machine civilization), they plead the case for humankind. But the machines have given the galaxy a chance, and the creation of a Harvester clone is the final insult. In the end the battle between the UGC and the Gnishians is almost irrelevant, as the machines decimate most of the human civilizations.

Lemire must have had the whole world built before he started the series, but it comes as a surprise at the end. Humans and robots alike were blind to the existence of the Old Ones, so the reader was as well. Of course four thousand years gave everyone a long time to forget! It explains all of the mysteries, even if it kind of makes all of the action in the series look irrelevant. And it establishes a surprising pattern in human civilization: every few thousand years the machines wipe out most of the human race, along with the technology they have created and abused.

But the destruction is not complete. Ten years later, we see one of the surviving human families. The machines have gone away, “and in their absence magic has reclaimed the universe!” One girl is on a quest to find robotkind and its fabled boy messiah Tim-21. Which sets up Ascender, a sequel that is certainly unexpected. It rises out of the ashes of a series which concluded with a dire result. 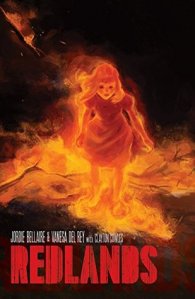 Colorist Jordie Bellaire makes her writing debut with this series about a trio of witches running the town of Redlands, Florida. The story opens in 1977, with a failed lynching of the witches–in front of the police station. This makes it official, so their vengeance on the male power structure seems completely justified. The scene shifts to the present for the second issue. The witches are in charge, and they have a serial killer to deal with.

The rest of the story involves the killer–his identity,  and his relationship to the witches. There’s also the need for a yearly sacrifice, and a lot of history. In some ways the history is more interesting than the present. There is a large amount of it, all of it surprising.

Despite the complimentary blurbs from other comics creators, this is a story that feels like an exploratory effort. Bellaire may have a future as a writer, but this arc leaves the question undecided. Del Ray’s art is effective, but not enough to overcome the limitations of the writing.

This is me realizing that I enjoyed the first two Sex Criminals collections, then completely forgot about it. So the second big collection includes issues # 11-20, which covers trade paperbacks volume 3-4. The first arc opens with a new Sex Criminal, an orderly with a manga fixation that creates some really weird effects. Myrtle Spurge (aka “Kegelface,” the head of the Sex Police) is having an affair with Jon’s psychologist to gather intelligence. Alix is another Miami Sex Criminal, with a thing for falling (first off bridges, then all sorts of other base jumping).

There are also several “meta” sequences, in which Fraction writes about writing: first one where he describes the things he should have Zdarsky draw (but didn’t, because the artist is an obsessive nut-job), then a lengthy one with the co-creators on panel discussing the difficulty of writing a scene. For longer than the actual scene would have taken, I think. Boring to me, despite my love of arty writing. Write the thing, don’t write about writing the thing!

There’s also another Sex Criminal with a real fetish, which seems to involve being humiliated. Jon and Suzie try to set goals for their relationship–after deciding that she does not want to keep robbing banks–which eventually results in Suzie taking a library job out of town. Kuber Badal, who had looked like a minor player, reveals himself as possibly the one in charge of the Sex Police. So there are some major changes here, enough to open up lots of future possibilities.