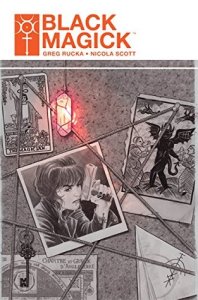 The continuing adventures of Rowan Black, police detective and witch. AIRA (aka The Hammer, witch hunters since antiquity) has figured out who she is. They are investigating, and make contact with her friend Alex; but it’s not clear if their intentions are good or evil. Another group which practices black magic (the Ascension) are trying to recruit her. This arc includes the early history of Rowan’s induction into the craft, as well as her mother’s murder. And her relationship with her partner Morgan takes a bad turn, even as she shares his joy in the birth of his son. We also see her black cat familiar in action. A talking cat! How great is that. All signs point to Rowan having much more magical power than she realizes, opening up many possibilities for future stories. Scott’s art continues to be both beautiful and unusual. Mostly gray scale, it employs color sparingly, but very powerfully. The effect is similar to colorization of black and white photographs.

Collects all five issues of the “Triple Feature” Bitch Planet series: every issue had three stories set in the Bitch Planet world, each with a different creative team, all “presented by” series creators writer Kelly Sue DeConnick and artist Valentine De Landro. Very few of them touch on the Bitch Planet prison itself. Most of them depict women trying to get by in the incredibly repressive world that sends women to a  prison planet as punishment for “non-compliance.” The stories include an ex-prison guard; young women trying to succeed in the corporate world; a couple actually focus on men in law enforcement; one is about a male sportsman who is subject to the same unrealistic expectations as women in this society; a story about women getting bizarre body modifications; and so on. Like all anthologies it’s quite a mixed bag. The art styles range from cartoony and luridly colored to fairly realistic. Only some of the stories succeed in telling a complete story in eight pages, but that’s always a challenge. As a whole the collection is often thought-provoking, and consistently entertaining.

I loved Northlanders, so I don’t know why it took so long to get to Black Road. It’s subtitled “A Magnus the Black Mystery,” which indicates an interest in continuing stories featuring the Magnus character. There was a character named Magnus in the second Northlanders arc, but he was Irish, and appears to have little to do with this character (apart from a possible basic inspiration). Wood made a point of making Northtlanderstories historically accurate, but he took considerable liberties here. Magnus has the traditional Viking toughness. but he is curious. and open to the new Christian influence. His main goal in this arc is protecting a Roman Cardinal on a mission to the far North. He fails at his task, but is convinced to accompany Julia (the Cardinal’s daughter) north. They have a rough time, including fighting off a pack of wolves. But in the end Julia turns on Magnus, and the blacksmith Kitta becomes an ally. Julia appears to be the hunter instead of the prey at the end, opening up multiple possibilities for the second half of the series. Brown’s art is a bit minimal, but effective.

Magnus the Black reaches Bishop Oakenfort’s rogue Vatican outpost without a specific plan. But after interrogating some guards he discovers that the bishop has found an especially potent relic: the sword that was used to wound Christ while he was dying on the cross. Magnus realizes that the authenticity of the relic is irrelevant; what matters is the faith that believers have in its power. So he decides to wait until the bishop has possession of the sword. Besting him in battle will demonstrate that the sword does not confer godlike power on the user. Magnus fights the bishop, then several of his soldiers…and walks away. Back on the Black Road he finally catches up with Julia, the protector of the Cardinal he was hired to take to Oakenfort in the first volume of the series. She makes a surprising choice, leaving Magnus to protect Norrsk from the difficulties that Christian conversion is bound to cause. He ends the arc with more questions than answers. 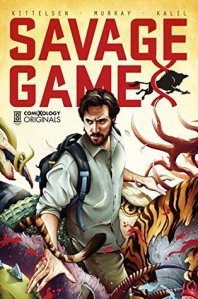 I’m an Amazon Prime subscriber, so I thought I’d try this out. It was the most interesting of the comiXology Originals to me, and also the biggest chunk of story. Calling it a “graphic novel” is a bit of a stretch. It’s almost 60 pages, but it’s more of an extra length premier issue for a series (and it does say Savage Game #1 on the credits page inside). The story is far from resolved at the end, and the final page says “The End?” It’s a very Jurassic Park-like premise, revolving around a private island and radical genetics experiments. The Savage Game of the title is a fight to the death between genetically designed super predators. Conner visits the island to discover what has become of his inheritance, believing his father Howard has lost his mind. Turns out Howard had been working on important medical applications after all, but too late to save his wife (or himself). A longtime employee has double-crossed him and taken over the AI that runs the island, and of course things go horribly wrong. It’s a fairly well made comic. I’m not a big fan of Murray’s art style, but it’s comparable to what I’ve seen from publishers like Boom!