The second collection of this supernatural crime-noir series begins in the middle of the action, as the first volume had. After that it is revealed that the story is taking place a few months after the end of the previous volume. Dylan has settled in to his vigilante mission. He has a distant relationship with his roommate, who has broken up with Kira, the love interest who caused such complications previously. She has also ended her relationship with Dylan, although they still see each other casually. Things start looking up for Dylan’s love life when he reconnects with Daisy, another ex-girlfriend. But his violent activities are starting to catch up with him. The Russian mafia he crossed earlier get wind of his identity, enough to figure out how to get to him via his drug dealer. And an encounter with the NYPD finally brings his murders (which he is thinking of as executions) into the spotlight. They form a task force, which Detective Lily Sharpe joins. She has never stopped investigating since she caught the case of Dylan’s first shooting: she is his worst nightmare, as she is basically on to him, even though she can’t convince the other cops yet. Last but not least, Kira’s nosiness reveals that Dylan has effectively been off his anti-psychotic medication for months, because his black market supplier has been giving him the wrong prescription. So maybe the demon he thinks he is serving is a hallucination after all…

The Acedia Vol. 1 collection came out in October, 2015; Vol. 2 in May, 2017. Matt Fraction and his co-creators are clearly committed to the series, but patience is required. After reviewing the previous volume I jumped in, and the story does indeed pick up right where it left off. Casanova Quinn still does not remember who he is, and the man he is working for (currently going by the name Akim Athabadze) is also a mystery. A mysterious couple–who Casanova seems to remember–is trying to convince him to kill his boss (who they describe as “a monster”). Athabadze is on his guard, and seems to know who Casanova really is. Meanwhile, Casanova’s enemies are coming for him from another dimension, as are the Metanauts (who are still trying to kill Casanova Quinn in every dimension). As usual it’s too surreal to make linear sense, but it’s fun to come along for the ride. I do think that Chabon & Bá’s Metanauts backup stories were better integrated with the main story line than they were in the first volume. I believe this concludes the fourth of the seven deadly sins the parts are named for (Acedia means “sloth” BTW): three more to go!

Baillie and Hetrick’s Scottish fantasy concludes in this second six-issue collection. It may feel a bit rushed at times, but at least a lot happens as everything gets resolved. Red Thorn proves to be far more altruistic than he appeared, ultimately sacrificing himself to defeat the god Belatucadros and restore the balance between Earth and the Otherworld. Isla’s fate (and that of her sister Lauren) prove far more interesting than they first appeared. Everything is resolved in a satisfying way, and the possibility of sequels is left open. Ryan Kelly’s guest artist spot is handled in the time-honored way of giving him all the scenes in one of the worlds in one issue, while Hetrick illustrates the other. Rather than playing up the artistic contrast he chose to use an illustration style similar to Hetrick’s, so all of the characters are on-model. 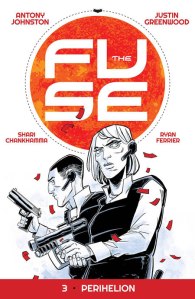 Perihelion is the day when the Fuse space station is closest to the Sun, a huge celebration (think Carnival) traditionally celebrated by most of the population. So it’s “all hands on deck” for the police, and Ristovych and Dietrich find themselves on the run all day long. They catch two homicides–their usual beat–plus crowd control and a hostage situation. They manage to catch a serial killer, and save his latest victim while they’re at it. At the very end we are reminded that Dietrich is still working on his own agenda, to find Yvonne Dietrich. The collection also includes Tabloid: A Tale From Fuse, which was originally published in one-page installments as a back-up story in issues #7-12 of The Fuse.