Happy to finally get back to this series: the first volume is one of my favorite recent comics. It described how a group of eccentric scientists and supernatural experts got together to create the Injection, a kind of world virus they uploaded to the Internet in an effort to fix things wrong with the world. They quickly realized that they had made a horrible mistake, as the artificial intelligence they had created immediately went its own way, self-aware and completely out of their control. In this volume consulting detective Vivek Headland tries to solve a case emerging from the Injection’s influence. The general approach is heavily modeled on Sherlock Holmes stories, but with a decidedly modern twist. Headland must deal with a haunted photo, a ham made from human flesh, and a lethal cult out to control the Injection (which they do not really understand). Headland solves the case, which did indeed involve the Injection in bizarre and unexpected ways: the IE is experimenting and learning, and has no regard for human life. Team members Simeon and Bridgid are called in to help Vivek–so we learn what they have been up to–and both Maria’s group the Curcus and the British Breaker’s Yard attempt to recruit Cunning Morel. He decides to become the Breaker, likely setting up the next arc. 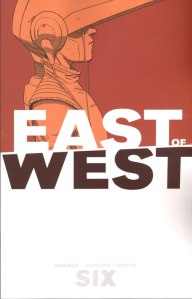 The conclusion to the second year of the Apocalypse (which is an odd thing to type). Two major events dominate the action. The first is a gathering of the Seven Tribes at Armistice (the site of the comet strike and the the great truce among the Tribes) called by the Prophet Ezra Orion, the first of the Chosen and carrier of the Message. Clearly this will mean nothing to you if you aren’t already reading the book. The meeting devolves into a fight among the representatives of the Tribes, and then with the huge army of followers of the Message that have gathered at the site. Death’s son Babylon is still being fed an apocalyptic vision of reality by Balloon, his AI companion (that’s him on the cover). He finds himself beset by a group of Hunters. Death thought they were only tasked with finding his son, but they were in fact instructed to kill him. Babylon and his allies (which include a wild pig) defeat most of the Hunters, and Death finds them just in time to save the day. He is reunited with his son–which is awkward, to say the least–and convinced not to immediately disconnect Babylon from the AI. Instead he joins Babylon and Balloon on their adventures. This has interesting implications going forward, because Babylon will finally be receiving input about reality that is not mediated by the AI. Perhaps he will decide not to become the Beast of the Apocalypse after all.

Recently read the first issue of the latest Panel Syndicate series. I remember Niimura’s cartooning from the Image series I Kill Giants he did with writer Joe Kelly. He has a very loose style, reminiscent of manga. The series is in black and white, and is the only Panel Syndicate series so far that uses conventional portrait oriented pages, like a standard comic book (the rest use a horizontal landscape format). Umami is about the adventures of two cooks in a sort of medieval kingdom. Which makes it a cartoon cooking fantasy story, I guess! The first installment is a satisfying 46-page chunk of story. And it’s “name your price,” so you can try it out for free if you want.

Continuing with the IDW omnibus horror collections I picked up at HeroesCon a couple of years ago: the Halloween season seemed a good time to finally dip into them. Got to love the title! Didn’t see how I could go wrong at $5, so I bought both volumes on the same day.

“Everybody’s Dead” (written by Brian Lynch, art by Dave Crosland, colors by Leonard O’Grady) is the five-issue miniseries that opens the collection. Most of the action takes place at a Halloween party hosted by a questionable college fraternity. The second page has the caption “This is the story of the last, best night on Earth,” so Spoiler Alert: things do not turn out well. This is a real B-movie story, with fairly stereotypical character types: the nerd, the jock, an older guy who has been an eternal college student, and so on. Crosland draws the series in a simple cartoon style, prioritizing energy over detail. The cause of the zombie outbreak is unusual. What looks like some sort of meteor strike turns out to be a bomb, possibly military in origin. That is one story thread that remains unresolved at the end, but the action covers for it unless you really stop to think about it.

The second story collects the five-issue miniseries “The Last Resort,” written by Jimmy Palmiotti and Justin Gray, illustrated by Giancarlo Caracuzzo. As the title implies, it’s about a zombie outbreak at an island resort. It’s a small island, so the resort is pretty much the only thing on it. The story opens with the scene of the infection, although it’s not clear what it means until much later. The narrative takes its time with the backstories of the survivors on the island, inter-cutting them with the present disaster in ways that are frequently confusing. There are only a few direct chronological cues. Many of the survivors arrive via an emergency aircraft landing, with some others by boat (including the two scientists responsible for the infection, again not immediately clear). This is a classic modern scientific zombie story: the cause is an infection, and the survivors are taken completely by surprise. It is also incredibly bleak, with every survival ploy answered by a fresh disaster. I expected more of Palmiotti & Gray. They crafted some memorable characters, but the concept is derivative, and it’s just not entertaining to watch them all get killed off. The Darwyn Cooke covers are fun (as always), but completely contrary to the dark tone of the series.

Wrapping up the collection, the third and final story is the four-issue miniseries “We Will Bury You.” Written by Brea Grant and Zane Grant, art by Kyle Strahm and colors by Zac Atkinson, it is a historical zombie tale set in New York in 1927. The locations and characters would have lent an unusual flavor even without the time period. The protagonists are a pair of lesbian lovers, and much of the action takes place in Coney Island in the company of a troupe of sideshow freaks. This and other surreal  touches give artist Strahm a lot to work with, which he makes the most of. His characters have a heavy, almost woodcut-like appearance reminiscent of artist Ted McKeever. It serves the story well, even if it mainly consists of a group of survivors fighting their way through mobs of zombies. Our heroes take to the rooftops, and the final scene shows the pair leading the Spanish Revolution in 1928.

Freelance Journalist & Musician; Senior Contributor, All About Jazz.com; writing on comics at mrvertigocomics.com & No Flying, No Tights.com
View all posts by marksullivan5 →
This entry was posted in Image Comics, indie comics, miniseries. Bookmark the permalink.