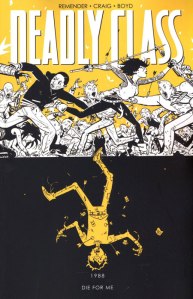 The school for assassins ends the first big series arc with a bang. It’s Freshman Finals, which requires the legacy students (those whose parents graduated from the school) to hunt down and kill the Rats (unaffiliated students, like most of the group the story has focused on). The previous collection had already demonstrated that major characters could die, suddenly and without any warning. Danger is inherent in the story, after all. But the nonstop action here really ups the ante. There are group melees, chase scenes, pitched battles–and a succession of shocking double-crosses. No one is safe, and no one can be trusted. Since this is not the kind of series that resurrects dead characters, expect big changes in the series focus going forward. Plot twists are one thing, but visually Craig does some especially effective work with his panel choices. Series of small panels are sometimes used to create motion, and small inset panels can give multiple perspectives on a scene. 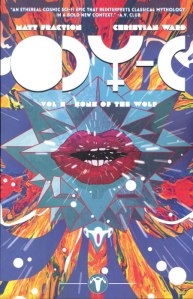 I’m still not completely sure what to make of this. Ward’s art is wildly inventive, while Fraction’s writing seems a bit stilted. Largely written in faux-classical epic poetry style, but with occasional (often shocking) lapses into modern jargon. It’s sometimes hard to read, but more importantly, I find it hard to follow. There was never any question what was going on in a given scene, but the overall narrative is often unclear. This arc is about Ene the Conqueror, and He, of Troiia, after the end of the Troiian War and their departure for home. There’s lots of godly interference, as well as humans generally behaving badly. He and his young ward hit upon a Thousand Nights solution when threatened with death on their wedding night. They tell the two kings a story with such a great cliffhanger that the kings pardon them–so no one in the kingdom dies that night. That’s a pretty cool conflation of different myths, and is the sort of inventiveness that might bring me back for another installment.

The series definitely gets back on track with this collection. Rogue NSA Agent Nicholas Finch opens the story torturing the infamous serial killer Edward “Nailbiter” Warren to uncover the secrets of Buckaroo. Turns out that Warren has been investigating the question himself–going back to high school when he was dating the current sheriff, long before he became a serial killer. Warren reveals that the Aztec-looking statues are all of recent vintage; they’re a red herring. As he is showing the secrets of the underground tunnels to Finch and Sheriff Shannon Crane, they are attacked by mysterious hooded figures. Maybe those figures are the secret of the serial killer plague. They certainly seem to be responsible for Detective Eliot Carroll’s loss of limbs. He’s the guy who got Finch to town by asking for his help. Oh, and he finally awakens from a coma at the end of this arc. Expecting some real answers in the next installment. 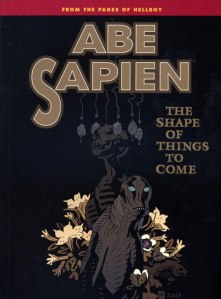 The further adventures of Abe Sapien. It is an interesting take on the BPRD Hell On Earth story arc that was taking place at the same time. Much more personal: Abe is trying to figure out his place in the big events that are affecting the world, and his adventures take place on a local level. Most of this collection takes place in the Arizona desert, far away from the big events of the main series. Things do get to the outskirts of Phoenix, so maybe the action will get bigger in the next arc. And the second story line follows a necromancer to Seattle, where he fails to get the answers he seeks about the big change that is happening in the world. He and his undead assistants are off to Norway. 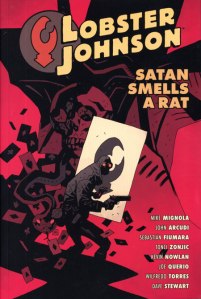 The Lobster returns, in a collection of mostly one-shots (one was a two-parter). There’s not a weak story here, despite the brevity and the variety of artists. I especially liked “Caput Mortuum” (art by Tonci Zonjic) about a Nazi plot to poison the entire city of New York with poison gas, distributed from a zeppelin; and the title story (art by Kevin Nowlan) about an evil scientist grabbing bums off the street for medical experiments. The Sketchbook notes in the back say that Zonjic had become the defining Lobster Johnson artist, but I would cheerfully take Nowlan’s artwork on every story. He has a lovely fine line–especially strong in drawing facial expressions–but he also gets the horror atmosphere right. And let’s not forget the killer monkeys in “A Scent of Lotus:” no Mignola collection would be complete without a surreal touch like that.