The collection title refers to “Gridlocking:” maglev-bike races across the Fuse’s vast solar arrays, an illegal activity which has nonetheless attracted a huge audience for its clandestine broadcasts, even back on Earth. When the leading racer turns up dead, the situation is complicated by her being from a rich family, as well as being the announcer and public face of the sport. Detectives Klem and Ralph’s investigation quickly turns up many complications, including the drug trade on The Fuse (so large it occupies an entire level on the station, called Smacktown), network licensing negotiations for the games, a rebel liberation group, and the usual family and marital complications. It’s ultimately a murder mystery in a sci-fi setting, and like the first volume the clues are all there for the reader, giving us a chance to figure things out along with the police protagonists. There’s one running joke that continues to tickle me. New arrival detective Frank Dietrich is German, and veteran Klem persists in calling him “Marlene” most of the time. There is some new information about Frank at the end of the arc–addressing the question of why a successful Earth cop would come to the station–which is bound to complicate things going forward. 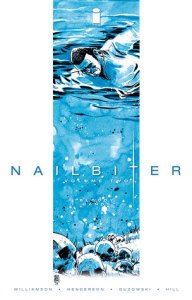 Slightly unexpected second installment in the series. There are definitely some significant bits of new information: the tunnels that run underneath the town, and the mysterious role played by bees. But the first two issues are standalones with little new information. A pregnant lost soul arrives in town, thinking her baby needs to be born in Buckaroo so they can both become famous; and comics writer Brian Michael Bendis arrives to do research on a new comic. The Bendis issue is a fun episode for fans–and he really is drawn accurately, although I can’t attest to the accuracy of the characterization–but neither of these issues advance the story much. The last three issues are more central to the plot. Here’s where the bees come in, and one other really crazy bit, a bizarre underwater temple that rogue NSA agent Nicholas Finch sees by accident while saving some schoolkids plunged into the lake by a crazed bus driver. In the final scene Finch begins a serious interrogation of convicted serial killer Edward Charles Warren (aka “Nailbiter”). So it’s a somewhat disjointed collection, but there are some very intriguing possible future plot points.

Continuing my catching up on the Mignolaverse, I read Abe Sapien, Vol. 3: Dark & Terrible & the New Race of Man, which was published by Dark Horse in 2013. This ties directly into the B.P.R.D. Hell on Earth story line–which I was happy to see I remembered well enough without review–and was the beginning of an ongoing Abe Sapien series. It’s Volume 3 because there were two collections of miniseries before it. It’s been so long on those that I actually bought them as single issues (in the bargain bins after initial publication). Enjoyed it and will read more. But there is a sameness in the Hell on Earth stories which makes me remember why I checked out after awhile.

This is a long-running series I’ve always enjoyed. But the publication schedule has always been fairly sporadic, which is how I came to miss this 2014 four-issue miniseries. Before long I realized that the title is literal: the story features Frankenstein’s monster (call him Adam), who is suddenly going blind. Recently undead Cal McDonald has been having some health problems of his own, so they seek out a Hollywood surgeon who is also an expert in the supernatural for help. The good doctor has his own agenda, and in the course of defeating him Cal is transformed into some sort of winged demon. One thing I can say about Niles: he’s not afraid to really shake things up.

More really delayed Mignolaverse reading: this one goes back to 2012. Lobster Johnson is his pulp-style vigilante. No “Batman doesn’t kill” stuff here: the Lobster deals justice with a pistol, and there’s a high body count. At heart this adventure is a gangster story, but it includes magical black fire and cannibals (!), so you never know what surreal Mignola craziness to expect.