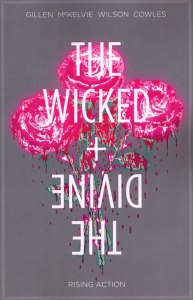 Newly created goddess Persephone was apparently killed at the end of the previous arc, so it’s a surprise seeing her alive and preparing to go onstage at the beginning of this one. The Pantheon had already broken up into opposing camps. The process is accelerated by den-mother Ananke’s plan to sacrifice young goddess Minerva, who has just turned 13 (which is apparently a magic number). This results in lots of fighting: this arc is more like a stealth super hero comic than any of the previous ones. Gillen says as much in the “Making Of” section in the back section, saying “It very much harks back to some of the work we did on our Young Avengers for Marvel.” By the end the situation has dramatically changed. Persephone’s answer to the final question “What do we do now?” “Whatever we want.” The final page has the note Next: Imperial Phase (Part 1). I can easily imagine this collection being the series finale: it brings to a close most of the conflicts that have animated the story from the beginning. Whatever happens next will be very different. 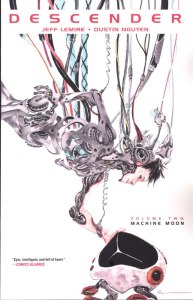 The further adventures of robot boy TIM-21. He spends most of this issue in the company of the Hardwire, the robot resistance. He agrees to come with them on the condition that they bring his human companions Captain Telsa and Dr. Quon along, and help him look for his human brother Andy. Meanwhile Andy has been revealed to be a Scrapper, a human who makes his living as a bounty hunter killing banned robots wherever they can be found in the universe. He clearly has feelings for TIM-21, and is hunting for him (which of course the robot and his companions do not know). There are a number of flashbacks that show the relationship of Andy and TIM-21 while they were growing up together. The Hardwire’s home planet is full of dark secrets: TIM-21 may be inadvertently contributing to the destruction of humanity. But his new friend TIM-22 seems to have treacherous ideas of his own, and the arc ends on a big cliffhanger. Nguyen’s watercolor art continues to be striking and beautiful: it’s a major part of the success of the storytelling. 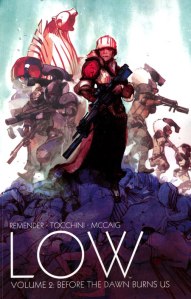 Only four issues in this second collection, but they still cover a lot of ground. No doubt it helps that the major world building was accomplished in the first volume. A lot of the action centers around matriarch Stel Caine and her quest to reach Earth’s surface, accompanied by an unlikely ally: the pirate who first attacked her family and split them up. There is a flashback that spells out what happened to the children immediately after the attack. The other major story line centers around her daughter Della, who has become the Minister of Thought in one of the human cities, where creativity and optimism have been banned. There’s an amazing fight sequence after she has been revealed as a traitor. This is probably not thought of as an action series, but that kinetic sequence really reminded me of Frank Miller’s classic The Dark Knight Returns. It’s also done in a beautiful, impressionistic style, as Tocchini delivers in the entire series. The theme focuses on the struggle between optimism and pessimism, but visually optimism always wins out. 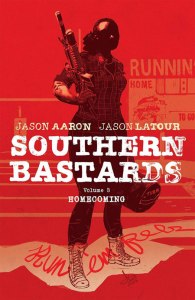 The cover image is a bit of a tease, because the “homecoming” that drives most of the action in this arc is the annual Homecoming game in the high school football season. Each of the six chapters focuses on a different character, including a backwoodsman, a preacher, and last but not least, Earl Tubb’s biracial daughter Roberta. There’s plenty of new history here, most of it dealing with Coach Boss and all of the people he has wronged in his struggle for power in Craw County. That’s a lot of enemies, and things are starting to go against the coach. In the end this arc is a summation and a preparation. It shows the effect of the deaths of Earl Tubb and Coach Big on people in town, and builds to what looks like a major climax in the next arc. Roberta’s arrival has been foreshadowed for a long time, but she is far from the only storm on the horizon. Another good installment in the series, even if it’s mostly buildup. There is one experiment in this arc: Chapter 12 “Vegetables” was written by series artist Jason Latour and illustrated by Chris Brunner, who was previously Latour’s partner on the series Loose Ends.