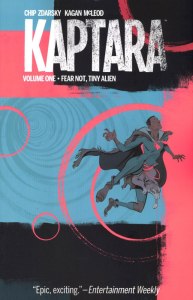 A science fiction adventure that starts out looking pretty conventional, Kaptara begins with an exploratory mission to Mars. But very quickly–during the first issue–things take a hard left as the space craft gets pulled into an unknown rift in space. The crew abandons ship, and fall onto an alien planet called Kaptara. The place is clearly truly alien, i.e. not in our universe. The two crew members the narrative is following find themselves under attack by a huge alien creature. One of them is rescued, and when he regains consciousness…

He’s in a castle, attended by more aliens. So the story basically shifts into high fantasy mode, with aliens that have a feudal system, use swords and similar non-technological weapons, and also have animal/machine hybrids, like tanks with animal heads. It’s visually crazy, and full of all sorts of cliches, like sexist trolls and macho male heroes. There’s also a Motivational Orb that floats around displaying sayings like “Be the Best You You Can Be.” Completely incongruous, but frequently hilarious, as Zdarsky finds ways to have the orb comment on the action indirectly.

The main motivation for this first arc is provided by a Kaptara bad guy named Skullthor who is thought to be using the dimensional rift to take over the Earth. This motivates the Earthlings (to save their planet) and the Kaptarans (to defeat Skullthor once and for all). But like all epics, the path is full of one complication after another. The story is so crazy that’s it hard to know what to make of it, really. The action carried me along through five issues pretty well, but I’m not sure how motivated I’ll be to continue with it.

There was an apocalypse promised in the final story line of The Unwritten, which was published as a twelve-issue maxi-series. It’s right there in the title, so it would have been a horrible tease if nothing apocalyptic happened. There was arguably an apocalypse underway right from the beginning of the previous volume. Leviathan, the source of all stories, was wounded and dying, and reality had basically come unglued. Tom Taylor and his friends have to cope with a world where fantasy and reality have become intermingled.

But if you’re starting from a world in chaos, you’ve got to ramp things up to get a true apocalypse. In the first arc “Sang” Taylor and his group (which now includes his father, Wilson Taylor) reenact an epic quest for the Holy Grail, which appears to offer the only solution to the crisis. There’s a brief intermission for a story about The Inklings, the literary group at Oxford University that included C.S. Lewis and J.R.R. Tolkien. As usual the series finds a way to fit these writers into the hidden Unwritten narrative. The “Annals of Comparative Literature” arc concludes the series. It shows the two villains of the series (Pullman and Madame Rausch) finally collaborating to wipe mankind out of reality. But Tom and his father also come to an understanding, which leads to a surprise for the villains. And there’s a nice little coda for all of the main characters. Nice ending.

The Unwritten ran long enough (71 issues if I’m counting all three sets of issue numbers correctly, plus an original graphic novel) to get eleven trade paperback collections. That’s a very long run by recent Vertigo standards. Yet it seems to have wrapped up without much fanfare. I think of it as a classic Vertigo fantasy series published at the wrong time–after the Sandman era, when Vertigo had largely stopped publishing such stories. Had it been published back then, or even around the time Fables started (it’s no accident there was a crossover with Fables, as the two share some similar storytelling tropes, both being concerned with myth and legend in different ways) it would surely have gotten a lot more traction in the marketplace. With the exception of the Fables crossover–which I found ultimately pointless–I enjoyed the series very much, and will miss it.

This had been on my “to read” list for a long time. Recommendations from a couple of friends finally got me to try it, and I’m glad I did. As a story about two girls–Rose is the eldest at 12 or 13,  her friend Windy a year and a half younger–it’s clearly intended for a YA audience. Set in a beach town where both of the families have cottages they return to every summer, the story begins as if this will be another summer vacation: the usual routine.

But this summer is different. Rose’s mom and dad are fighting, creating an atmosphere of tension in the family. Rose has an idea of what they are fighting about, but her parents seem to be be dedicated to hiding it from her as much as possible. Which of course only makes her more curious, and angry about being left in the dark. While in town Rose and Windy become outside observers to a teenage drama involving a possible unplanned pregnancy. Emotions are clearly running high, but they have to guess at what is really going on.

The girls are old enough to start thinking about puberty, although it doesn’t seem to have started yet for either of them. So there’s lots of talk about getting breasts–“boobs” is the preferred term, but there’s one hilarious scene where they crack each other up with every slang term they can think of. They’re also at least thinking about sex, which the possible teen pregnancy ties into. Their frank discussions of  these subjects no doubt accounts for the various censorship challenges that have plagued the book, despite winning a Caldecott Honor for illustrated children’s literature and an Eisner award.

This One Summer is a very subtle coming of age story, in that there is no big climactic event or realization. The girls just contend with adult problems, probably for the first time. I like the fact that there is no omniscient narrator, so we consistently see things from the girls’ perspective. There are secrets about the parental and teen relationships they become involved in, and they are not fully resolved. The narrative captures the indolence of a summer beach vacation as well as the emotional drama.

The illustration style suits the story perfectly. Done in blue wash, it’s a refined alt-comics drawing style. Facial expressions are frequently cartoonish, but expressive, but there are also some lovely detailed drawings, like the splash page of hummingbirds at a feeder. I can only imagine the resonance the story might have for a teenager, but it’s an evocative story for anyone who remembers childhood.