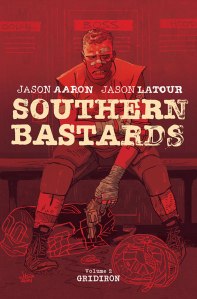 Aaron and Latour achieve the seemingly impossible in this arc: they make Coach Boss a sympathetic character. The story of what it took to take him from the worst football player at Craw County High School to the most powerful and feared man in town is a story of massive family disfunction, nearly superhuman ambition and drive, and an unbelievably corrupt local government. It’s hard not to empathize with the boy from the wrong side of the tracks who finds a way to succeed against those odds.

But the cost is high. Only for him at first, but eventually it weighs heavily on the other members of his management team. It’s a rich story for only four issues. And a surprising one: the first collection ended with a surprise reveal about Earl Tubb’s daughter. Instead of bringing her into the series then, we’re left with another teaser at the end of this collection.

The TPB ends with a cover gallery and a sketchbook, many from the French release of the book in Paris. 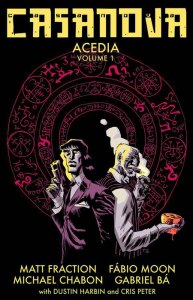 Interdemensional superspy Casanova Quinn comes to this arc (the fourth in the series) on our Earth, with no memory of his past, not even his name. He’s now known as Quentin Cassaday, and he’s working as a chauffeur and assistant to a powerful man named Amiel Boutique–who has no memory of his life until about age 30. Boutique knows that Cassaday must have a past, in which he acquired many skills (not to mention the assassination attempt that just happened). So he suggests that the two men each investigate the other to get some answers.

Meanwhile the assassination squad known as the Metanauts continues traveling to each dimension, killing the Casanova Quinn in each one. Their story is told in a short backup in each issue written by renowned author Michal Chabon and illustrated by Gabriel Bá. Chabon is such an accomplished writer that it should come as no surprise, but it’s still remarkable how well his backups fit with the main story. He completely inhabits Fraction’s surreal world.

Casanova’s amnesia is a very effective storytelling device. It frees both him and the reader from the need to remember the previous interdimensional craziness in detail, which had become increasingly difficult to follow (and I say that as someone who has been enjoying the series very much). Fraction claims that makes this series new-reader friendly, but I wouldn’t go that far. To fully appreciate what’s going on around Casanova you have to have some idea of how he got there. 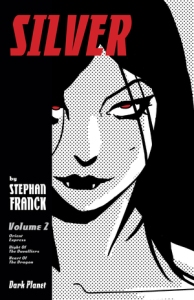 Creator Stephan Franck had a Kickstarter campaign for the second collection of his vampire/crime noir series Silver. As a backer, I’ve already read the digital edition, which contains Issues 4-6 of the series. Still a blast, regardless of how unlikely the genre mashup may sound. Franck takes care to use Bram Stoker vampire lore and noir genre tropes equally—although the balance varies a bit from issue to issue–so it always operates on both levels. Issue #4 is a classic “pickpocket on a train” sequence. The team has to steal an invitation to Dracula’s Walpurgis Night celebration, alter it to invite one of their own, then place it back in the victim’s pocket–while also prepping one of the team to play a convincing elder vampire. All kinds of suspense, and it all works.

When they get to the castle, the goal is to set up the big heist. To do it they must pull off a sting operation, because the treasure stronghold is impregnable. Franck creates a castle that is visually epic: a massive fantasy structure out of time, full of impossibly high ceilings and shadows. Dracula’s court is a place of political intrigue and the constant threat of discovery and death. It’s a dangerous place for veteran vampires, let alone a group of mortal humans trying to pass.

All of the action happens accompanied by ringleader James Finnigan’s wry, cynical commentary. It’s like a noir detective story narrated by the crook. By the end of the collection the hook has been baited, and the team has somehow dodged all of the potential traps and pitfalls. It could be argued that the next collection is where the action really starts.