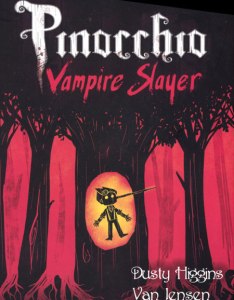 Finally catching up with Pinocchio, Vampire Slayer now that it’s been collected into a single volume. Very enjoyable, despite the seemingly silly premise. I remember meeting Van Jensen when he was first promoting the book. I liked him, but I was too put off by the premise to try the book, which I now regret. Just couldn’t get past the whole idea of Pinocchio and vampires.  He used to bring a terrific giant Pinocchio prop to cons, complete with a stake for a nose. In fact it’s not nearly as silly as it first appears. Jensen mentions reading the original Pinocchio by Carlo Collodi and seeing how “weird and funny and dark and complex it is.” That is the world the comic is set in, not the Disney cartoon. 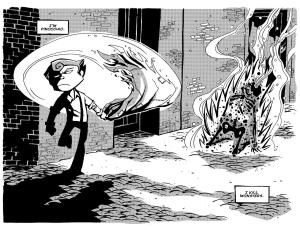 When they launched the book Jensen and Higgins were both new to comics, so they had no idea how successful it would be. They made the first volume self-contained, and it’s the shortest of the three. The connection between Pinocchio and vampires is made when vampires invade Pinocchio’s hometown and kill his father Geppetto. When Pinocchio tells a lie his nose grows into a stake, perfect for killing vampires, so he uses that for his mission of retribution. One of the funniest things in the book–and it’s often humorous–is the inventive series of lies Pinocchio tells to get his nose to grow. It’s also a built-in lie detector, so there’s additional humor when he tries to deceive one of his friends. 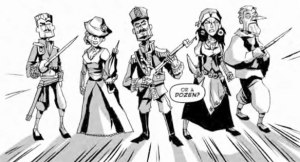 The members of the Great Puppet Theater

Pinocchio, Vampire Slayer Vol. 2: The Great Puppet Theater enlarges the cast with a whole ensemble of vampire-hunting sentient puppets, each a distinct, fully drawn character. Their origin is a mystery, but the resolution creates an unexpected tie between the puppets and vampires. Also, Pinocchio becomes a real boy! This collection ends in a high-seas adventure, which leaves Pinocchio and some of the puppets literally adrift at sea. Each one of these installments got longer than the one before, and the storytelling got just a bit more assured. By now the series had proven itself sufficiently to end in a cliffhanger. 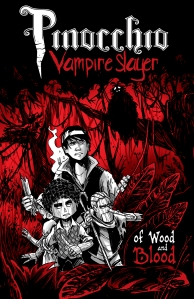 Pinocchio, Vampire Slayer Vol. 3: Of Wood and Blood concludes the series with an epic battle between the Pinocchio gang (which includes the puppets, another group of sentient wood objects, and their human friends) and the Master of the vampires, the Dark Lord Dracul (aka Vlad the Impaler). Dracula and his minions seek nothing less than world conquest. It seemed inevitable that Pinocchio would somehow have to return to puppet status before the final showdown. He does, but I thought the mechanism used was a little weak, the only real stumble in the whole story. The big climax shows Vlad finally being defeated by the grove of sentient trees he had inadvertently created through years of heartless murder. It’s a nice bit of poetic justice, and completes the vampire/puppet circle that the story had gradually set up. Pinocchio does not get quite the happy ending I was expecting, but it’s noble and appropriate to his character.

In the Afterward the creators say that they left room for possible sequels. I’d love to see them return to the world they created around Pinocchio.

Freelance Journalist & Musician; Senior Contributor, All About Jazz.com; writing on comics at mrvertigocomics.com & No Flying, No Tights.com
View all posts by marksullivan5 →
This entry was posted in indie comics and tagged Dusty Higgins, Van Jensen. Bookmark the permalink.