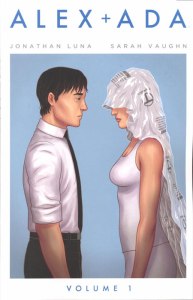 A science-fiction story about the relationship between humans and robots. This future looks a lot like today, except for all of the helper robots in use, even at home (one of them brings Alex his morning coffee). Some of them are androids which appear completely human. There is considerable ambivalence about this, especially after an A.I. system went out of control and caused some human casualties.

Alex has been trying to get over a painful breakup, when his grandmother unexpectedly gives him an advanced X5 android for a birthday present. Of course this is an attractive female intended as a companion: Alex isn’t sure he even wants to keep her at first, but eventually names her Ada (which is part of her model name).

Ada acts human, but she completely lacks free will. She’s like a perfect servant, with no desires of her own except to please her owner. As Alex gets used to having her around he begins to find this disturbing. There’s something about it that doesn’t seem right. There is a law making sentient robots illegal, but Alex begins to wonder…what he discovers, and the decision he makes, are the climax to this arc, the first five issues of the series.

There’s a long tradition of this kind of story, e.g. “I, Robot” and the Terminator movies, not to mention the recently released film Ex Machina. So far this story has had a more intimate scale: it really is about a relationship. It’s a strong introduction to the series, which has me wanting to find out what happens next. 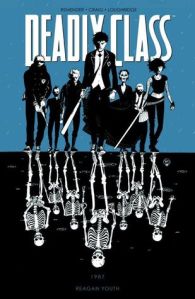 A high school drama with a difference, because this school is the Kings Dominion School for the Deadly Arts–training ground for the next generation of professional assassins. Most of the students come from the world’s top crime families, or from a family of assassins (one of them is the son of Joseph Stalin’s top assassin, for example). Marcus Lopez is just a street kid with potential, who accepts the invitation to enroll mainly because his life is completely empty and he has nothing to lose.

The year is 1987, so the subtitle of the volume has a double meaning. It’s Ronald Reagan’s second term as U.S. President, which is a big part of the historical and cultural setting of the story. And Marcus has a more personal connection: his parents died in front of him, caught up in the suicide of a mental patient released from a mental institution as a result of Reagan’s policies. He holds Reagan responsible, and has vowed to kill him.

As the story opens we see how Marcus gets by living on the street. As bad as it is, he repeatedly mentions that life in the children’s home he was sent to after his parents’ deaths was worse. It’s a lonely existence, but initially his life at the school is also isolated. He doesn’t understand the clique structure of the place, and opts to stay on the outside. He finally starts to get close to his lab partner during their first assignment, which involves a real murder. So the reality of the situation is clear from early on.

The climactic event of this first arc happens when a group of students heads to Las Vegas. They ask Marcus along so he can murder one of their fathers, who makes his living as a gambler. On the way they buy drugs, and Marcus ingests a large dose of LSD in a show of bravado. So he goes through the rest of the visit in a psychedelic haze, which is beautifully colored by Loughridge.

The ensuing series of violent events are definitely real. Marcus helps kill the father, is nearly murdered by a fellow student in a jealous rage over his girlfriend, and confronts his nemesis: a scarred former resident of the children’s home. This comic is not for everyone. In addition to the fairly graphic violence, it is also full of racial slurs and rough language generally: these are not nice people–or at least they have to put up a tough front. But they are vividly drawn (visually and in the dialog). It looks like it may be a rough ride, but count me in.

Tom Taylor has been trying to find his way back to our world for some time in this series. He’s been wandering through stories–with a significant trip through the Fables universe in the previous volume, and a visit to the Underworld of the Orpheus myth in the one before that. In the course of the first issue in this collection we see him travel from “the beginning of all things” through the beginning of life, then the creation of language and story…finally winding up back in London, reunited with longtime adventuring companions Lizzy and Richie. He’s returned to a world where reality has become tilted, and all sorts of bizarre story elements have become real. This is a place in which a medieval army can come under attack by long-legged Martian fighting machines from The War of the Worlds.

The cause of the crisis–and Tom’s dad Wilson actually uses that word–is the injury of Leviathan, the source of the power of story. Wilson and Tom are both trying to help with the healing, which puts them in direct conflict with the villainous Pullman, who has been trying to kill Leviathan. Wilson has a plan which Tom doesn’t trust, so he goes off seeking his own solution, which puts him back into contact with Madame Rausch, a player we haven’t seen for awhile.

Meanwhile, Pauly the foul-mouthed bunny (who has finally found his way back into human form) has found his way to Wilson’s house. He has been listening to an owl’s advice–an owl who is revealed to be Pullman at the end of the arc, as the two head underground. Amazing how significant this seemingly minor character became.

As the penultimate volume in the series, in some ways this is all set up: a way of putting all of the major characters back in play while setting the scene for the final conflict. But there’s still plenty of literary references to keep things interesting. I especially loved the appearance of the Martians, but there’s also a nice Alice in Wonderland sequence earlier in the collection, and a restoration play that Lizzie must escape from.